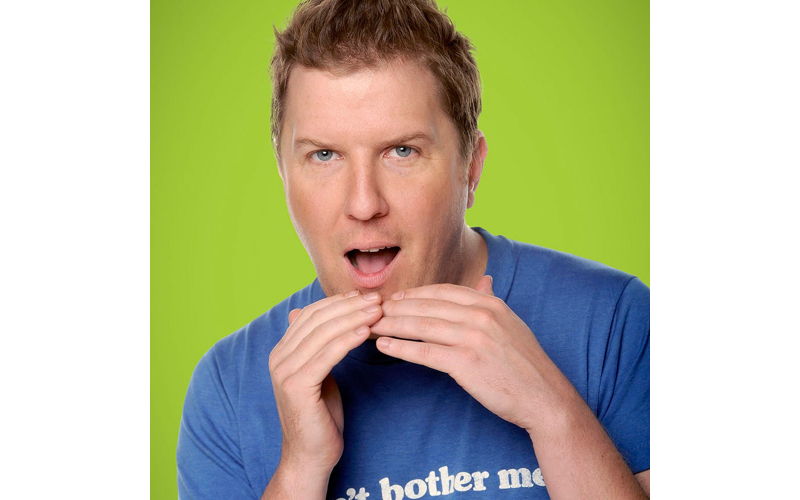 In 2001, during one of his earliest televised specials, comedian Nick Swardson made a joke that’s followed him around. It’s followed him because it’s not a joke at all, it’s an event he wants to occur in his life. And, well, people just happen to find this desire funny. Swardson got folks laughing at the idea of your funeral being your last party. So he described what he’d want his funeral to look like. It’d be a closed casket, and as everyone mourned, believing him to be at rest in his eternal bed, the lights would go down: Swardson’s body comes down on cables, then strobes come on, and techno music starts pumping, his corpse pulsing to the beat. And John Stamos would be there — just a random celebrity Swardson would send money to before dying so that Stamos would show up. The final wire act, dancing stiff, part might have been a bit of hyperbole.

“That was a joke, but I do hope that John Stamos does show up,” Swardson says. “That would be amazing.”

A comedian having a joke follow them around can be problematic. They start to be defined by one bit while trying to advance a career. Commercials might want them to do that bit. Or a catchphrase becomes their schtick, one that they can’t out run. The same goes for television or movie roles comedians take up. Swardson’s carved out an identity for himself as an energetic stand-up comedian who tackles everything from serious subjects to … the smelling of farts. In his acting roles, he often depicts naive losers on their own life mission. Despite having an identity on the stage and the screen, Swardson refuses to be defined by one joke or one role.

“It’s whatever I choose to do,” Swardson says. “I choose the roles that I find interesting or different. And I don’t pigeonhole my stand-up in terms of being a character. When you see me on stage, it’s me on stage. … The great thing about stand-up is I have control. I can do whatever I want. There’s no studio executive, writer, or producer. There’s nobody telling me what to do. I have complete control and autonomy over what comes into my head.”

Even with that effort to control his career, Swardson still gets people coming up to him on the streets to tell him that they loved one character of his — Terry from Reno 911. Terry was a recurring role on the Comedy Central reality cop show satire focused on a fictionalized Reno, NV sheriff’s department that ran from 2003 to 2009. A prostitute always in booty shorts while rocking a midriff, Terry had an affinity for getting his work done at taco stands, grocery stores, or behind dumpsters. Terry also always wore roller skates. Swardson recently joked at a small club gig that even real cops recognized him for the role — a recognition that got him out of many speeding tickets. While it might seem like Terry would haunt the comedian, Swardson embraces the sassy prostitute and the real people who still come up to him and ask about the role.

“Terry was one of those characters that really resonated with people,” Swardson says. “People just love Terry. I love Terry.”

Even with the efforts to keep his comedy fresh and himself away from any stigmatizing roles, Swardson lives with no fear of a fart joke. The cliche goofs are something of an obsession with him — a layered metaphorical commentary on the human condition in a bad smell and lip flapping noise. His latest cross country set of dates is even called the Too Many Smells Tour. The butt expulsion has resided in Swardson’s comedic lexicon since his career’s early days and while hanging out with fellow comedian Zach Galifianakis. The two used to go to the store and get foods that would make them fart and try to light those farts on fire back at the apartment, Swardson remembers, and maybe to try and break down why this gastrointestinal disturbance proved incredibly humorous. If one aspect of his career gives him a hard time, it’s the fart jokes. The fart joke still holds up to Swardson because it is so predictable and run into the ground — yet he still uses them.

“When people try to call me out [by saying], ‘It’s super embarrassing. You’ve stuck with farting and diarrhea. You think it’s funny. It’s like so immature,'” Swardson says, “I’m like, ‘I know.’ I’m in on the joke.”

While Swardson’s out-maneuvered a single, inescapable blip in his career, he thinks he’s got the last joke he’ll ever tell locked down. A while back, Swardson ran into John Stamos, and Stamos knew Swardson’s joke about coming to the comedian’s funeral.