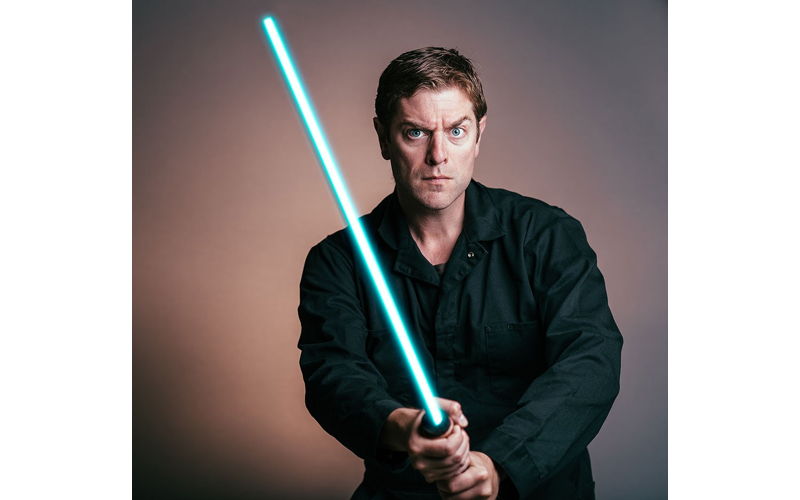 Charles Ross is a one-man army of one-man shows. Known for his single person performances based on the Christopher Nolan Batman films, Star Wars, Lord of the Rings, and Pride and Prejudice, Ross has a knack for distilling everything pop culture into a digestible shot of comedy theatre. He’s spreading these bits of nostalgia and parody at Piccolo, doing his takes on The Dark Knight trilogy, Star Wars, a Pride and Prejudice TV mini-series, and Stranger Things.

City Paper: You’ve got a handful of one-man shows you’re doing for Piccolo-Spoleto. Why have you made so many one-man shows based on pop-culture?

Charles Ross: I like to say that I watched too much TV and I can’t actually make anyone work with me, but that’s not entirely true. When I think back to the first time I did a fringe festival, I was in a larger cast. I noticed that the people who were doing well were doing small shows and often times had a hook. In one case, there was a guy that was doing basically a one-man show where he was playing William Shatner. And I thought to myself “if you could do a solo show that was based on something I loved …” In this case the first one I tried was Star Wars — surely there would be a huge built-in audience, just because people love Star Wars. And I think it’s really key that you have to love the thing that you’re doing a show about. If you don’t, I think it comes across to your audience that you’re just a charlatan.

I like the pop culture stuff because that’s sort of what I either grew up with or some of the stuff I’ve had the chance to see.

CP: You’ve got a nice theme going with Batman, Stranger Things, and Star Wars. Pride and Prejudice seems a little out of the blue.

CR: It is a bit out of the blue, but honestly I had been thinking about doing this show for almost a decade. It was actually a larger leap of faith trying the Pride and Prejudice show because it’s a woman’s story. Most of the cast is women, and here I am being a guy dressed up in a costume most of the time, but having to be mostly women. It’s a ridiculous concept trying to do a one-man show anyway, so I thought if I’m going to be ridiculous, I’m going to be completely ridiculous.

I’m very interested to see whether or not Pride and Prejudice draws in the same kind of audience that would come to see Star Wars. This is certainly something that seems a little bit out of left-field, but I actually think that’s what makes it seem attractive.

CP: What is your favorite one man show that you’re performing at Piccolo?

CR: I love them all for the same reason you love your kids. So much of you has gone into it. Not just the writing of it, but your loving of it, and then the development of it. I feel like there’s an ownership and investment that, only when you do this type of work would you really be able to appreciate. I guess if I was being commissioned to do shows that I didn’t really want to do, I guess I would feel less inclined to love it. In this case here, they’re all absolutely a labor of love.

CP: What kind of planning goes into your one-man show after you’ve chosen the idea?

CR: It can be a little different. If there’s a source material like a novel, as the case of Lord of the Rings or Pride and Prejudice, I go back to that source material right away, read it all as much as I can, then go back to the film version I’m going to be basing it on. It makes it a lot easier to see very clearly the decisions that the movie makers or TV makers made themselves in adapting that source material, and that helps to inform how I’m going to approach it, myself. Then I sit at a computer and clickity-clack away for a few hours and try to regurgitate the gist of the story. I try not to worry so much about the details, because there will always be about 75 percent filler in anything. Very, very rarely do you have something that’s completely super important details for every single moment of a show, with the exception of the Batman films. In that case, I take out all these details, and try to get down to the bare story itself. Then I can take some of those details and add them back in when I’ve put it back on my feet, when I start to rehearse it.