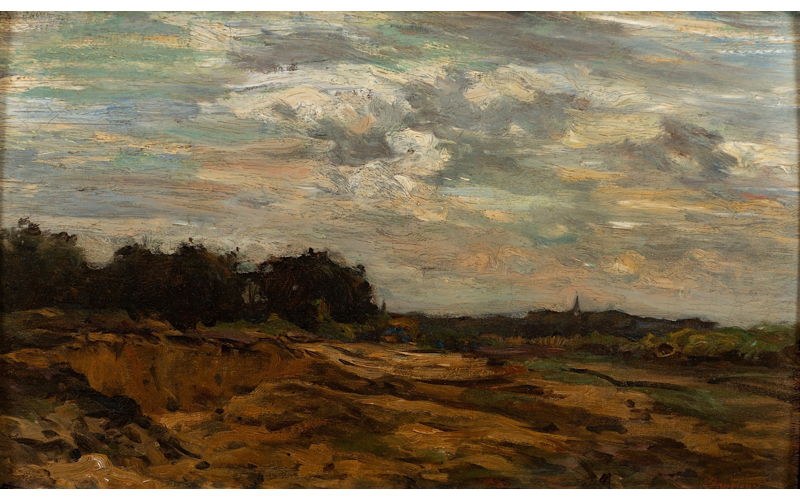 Nearly four years of negotiating with museums and making promises, coming up with deals and arrangements, and downright collegiality and friendship made the Columbia Museum of Art’s latest exhibition possible. But, of course, it was also a good amount of sheer, dumb luck.

After all, any time you approach someone with an idea as wacky as borrowing an entire art collection for a monumental show like this one in a relatively small museum, you certainly need a bit of luck for them to feel even the least bit optimistic, let alone say yes.

“As fate would have it, Steve [Naifeh] and Gregory [Smith] lived in Aiken,” says Will South, the museum’s curator. “I’d known the pair for years, and have known of the collection in their house, and I always thought, ‘This is a show,’ and I just never had the guts to say, ‘Can I just borrow your house,’ which is obviously kind of a stunning question.”

But, it turns out fortune really does favor the bold. Once he had worked up the courage and jumped through the hoops needed to get everything together, South managed to put together an exhibition titled Van Gogh and His Inspirations, thanks in part not only to the collection of Naifeh and Smith, but the research they had conducted as well.

Naifeh and his partner, the late Smith, co-authored Van Gogh: The Life, a New York Times bestseller and an ambitious undertaking that explored the life of the artist beyond his artwork, something other scholars had not looked at before.

“It was incredibly exciting to sort of see him that deeply,” Naifeh says. “There is a huge body of scholars who know him intimately and who were incredibly welcoming and friendly and helpful to us, but no one had really spent 10 years, day and night, looking at the life as opposed to the art, and that meant we were seeing things that people really didn’t need to see.”

Naifeh and Smith pored over collections of letters written by and to Van Gogh, his friends, and his family, learning his life on a deeply personal level.

“We studied them like a Talmudic scholar would study the Bible,” Naifeh says. “We read the family letters just as carefully, and then we read the literature not only of the artistic times at which he lived, but all the other important material — Dutch family life in the 19th century, psychiatric institutions, medical practices in the 19th century, and all the other things that were necessary to understanding him.”

Shortly after concluding the work on the book, the two began amassing a collection of artworks by Van Gogh’s inspirations. One thing Naifeh enjoyed about the letters was reading what Van Gogh had to say about other artists. From the Renaissance to the present, Van Gogh knew art intimately.

“These authentic quirks and their connection to Van Gogh had already been collected and studied,” South remembers. “So, my question became, ‘Well, how do I get the Van Goghs?’ I thought, originally, I would get three, but my boss at the time said, ‘No, you need at least half a dozen.’ The new director came in later and said, ‘No, you need 12.'”

The team at CMA knew they would be lucky to have even gotten six, but they managed to pull together a dozen pieces for a meaningful show for their audiences and visitors.

“The result is a show of 60 pieces that all hang together and tell a story of how Van Gogh became Van Gogh,” South explains. “It’s more than just the paintings — it’s how he grew up, his family, his friends, what he had for breakfast. This guy had a unique life … He was a breakthrough waiting to happen.”

That breakthrough is perhaps the connection to the artist that so many people from around the world and from all walks of life feel.

“The thing that’s so astonishing about Van Gogh, as you describe your affinity, your appreciation of Van Gogh, there are literally millions and millions of people who feel the same way,” he explains. “There is really no other artist who appeals so broadly, people from every country, every age group, and educational background.

“Even if you compare him to someone like Rembrandt, who is one of the towering figures of human civilization, even though he is widely loved, the feeling of a personal connection isn’t there.”

It’s hard to pinpoint exactly what makes Van Gogh’s artwork so relatable to so many, but reflecting on the powerful emotions expressed in the thick brush strokes and striking colors has given way to at least one idea — a connection to tragedy, and a hope for later joy.

“The color is so intense, and the drawing is so playful and has so much character that it speaks to the largest possible audience,” Naifeh continues. “But, there is also something else … If all you know is that he cut his ear off, and if you’ve seen some of these rather intense and sad self-portraits, and however he died you know that he died young from a bullet wound, you don’t need to know any more about his life to know that it was a sad one.

“Yet, the paintings, especially the later works, are joyful by contrast, extremely, at least, touching if not exuberantly happy,” Naifeh finishes. “I think without even being conscious of it, a large part of the audience connects with that.”

The exhibit puts you in a very real presence of a man who suffered a life of tragedy and yet found a way to share happiness and hope with the world long after he had left it.

“One of the great sadnesses is that he died at 37,” Naifeh adds. “But, it’s not like he had stopped painting. Since the majority of the paintings we know were painted in the last two years of his life, imagine if he had had two more. Imagine if he had the same technology we had now. Just imagine how he would have reacted to, well, just everything that came after him.”

Van Gogh and His Inspirations will be on display at the Columbia Museum of Art through Jan. 12.

Over the course of a lengthy career, Del McCoury has become widely known for his prowess as a bluegrass bandleader and an unapologetic embrace of the disparate musical forces that lie outside of that world. For these, and other reasons, his family act, the Del McCoury Band, remains a perennial favorite among peers, critics and fans alike.

Charlestonians are fortunate to live in a city filled with celebrated dishes. Fried chicken from Bertha’s, oyster sliders from The Ordinary, whole hog barbecue from Rodney Scott, a lobster roll from 167 Raw — the list goes on. Locals know the city has more to offer than what comes up in a Google search for […]