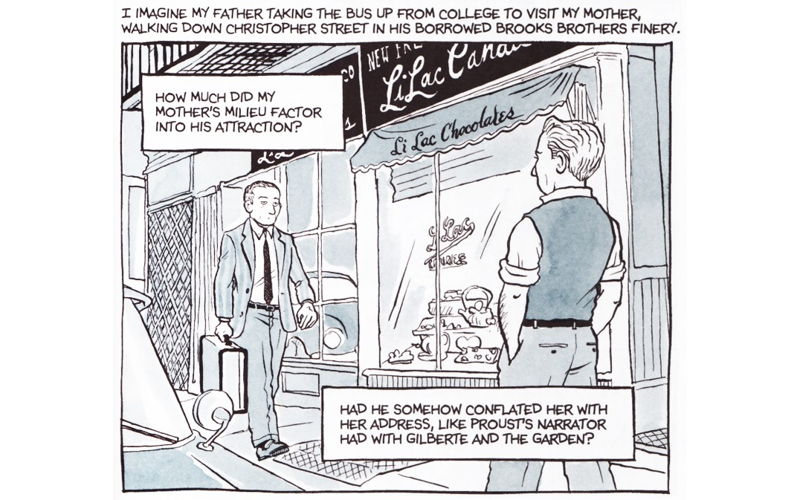 A conservative Christian organization is criticizing the College of Charleston’s choice for a freshman read because it includes depictions of sexual intercourse and deals with the author’s sexual orientation.

For its annual The College Reads! program, which provides a free copy of a book to all full-time faculty and incoming students in the fall, CofC has chosen Alison Bechdel’s graphic memoir Fun Home: A Family Tragicomic. In the book, which is composed of graphic novel-style panels and narration, Bechdel tells the story of growing up with a closeted gay father, coming out as a lesbian, and eventually dealing with her father’s suicide.

The college announced its selection of the book in January. This week, the group Palmetto Family published a blog post and sent out an e-mail titled “A Shocking Summer Reading Assignment!” that included a synopsis of Fun Home alongside synopses of the other major state colleges’ freshman books. The end of the e-mail read, “Which one of these books is not like the others? And exactly how bad is it?” Other colleges’ selections included Why College Matters to God by Rick Ostrander (Charleston Southern University), We Were Soldiers Once … and Young by Lt. Gen. Harold G. Moore and Joe Galloway (The Citadel), and The Postmortal by Drew Magary (University of South Carolina).

Not wanting to take Palmetto Family’s word for it, the City Paper drove down to the College of Charleston Barnes & Noble to pick up a used copy of Fun Home. When we asked an employee of the bookstore about the controversy, he said that a college parents’ e-mail listserv had lit up in the past few days with parents weighing in about the book on both sides.

Palmetto Family, formerly known as the Palmetto Family Council, was started in association with Focus on the Family and the Family Research Council. The group’s website states that its vision is “to transform the culture in South Carolina by reclaiming the values and virtues of marriage, the traditional family model, and sexual purity.” Reached by phone, Palmetto Family President Oran Smith said the group found out about the college’s book selection after a family attended freshman orientation and called Palmetto Family to complain about it. Smith says he has read parts of the book and skimmed others, and he’s primarily concerned with the “coarseness” of it.

“I think if this book were a magazine, most convenience stores in the state probably would not sell it to a minor,” Smith says. “If it were photographs instead of pen and ink or sketches and printed on slick paper, I really can’t see a reputable C-store selling it to anyone younger than 18.”

Asked if he took issue with the book’s discussion of the author’s sexual orientation, Smith said, “I’m not sure that would be our leading concern, but it is part of our concern because it’s promoting that lifestyle.”

The College Reads! book is chosen each year by a committee of faculty, staff, administrators, and students. According to a press release from the college, the committee looks for “a book of a manageable length, with a living author, with relevant themes and intellectually stimulating topics that will generate meaningful dialogue and engage the campus community in a variety of ways.” Previous selections have included the food-ethics treatise Eating Animals by Jonathan Safran Foer, the Vietnam War story collection The Things They Carried by Tim O’Brien, and the novel Jewel by Bret Lott (an author who also aroused some controversy over the inclusion of his book The Hunt Club in public grade school libraries).

CofC spokesman Mike Robertson says the college spent about $39,000 to buy 4,000 copies of the book and will also spend $13,000 to have the author visit the school in October. Robertson says he spoke with faculty in charge of freshman orientation and did not hear of any parents complaining about the book selection. “A lot of schools do this now. What it is, is they want to have all the freshmen come in with a shared experience,” Robertson says. “This is a way they can have a shared experience where they have that one thing in common they can talk about — and especially a book like this. If you read it, you find out it’s about a 17-year-old girl who doesn’t really know who she is and came from a kind of dysfunctional family, and so it’s one of those things where it can spark conversations, and that’s what they’re looking for.”

In a blog post explaining the book’s selection in January, Provost George Hynd said the book was meant to inspire “important conversations” about topics including identity, diversity, and sexuality. “The themes of Fun Home support the Diversity Strategic Plan, the creation of the Gender Resource Center on campus, and speak volumes about our commitment to an open campus climate for all students,” Hynd said.

Bechdel will give a talk about the book Oct. 24 at 7 p.m. at TD Arena. The event will be free and open to the public.