A Bridge too Far? 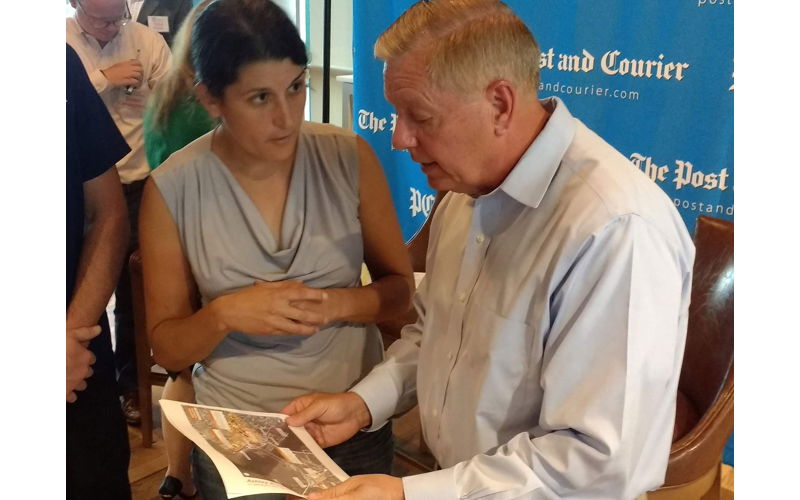 The crowded bridges that connect West Ashley and downtown are a hassle for many commuting motorists, but for pedestrians and cyclists, they’re just one part of a potentially dangerous trip between two bustling communities.

In an effort to protect pedestrians and lower traffic congestion, Charleston has applied for a federal BUILD (Better Utilizing Investments to Leverage Development) grant from the U.S. Department of Transportation.

“It’s basically a grant funding program that’s supposed to fund major infrastructure projects and get it done quickly,” says Katie Zimmerman, executive director of Charleston Moves. “There’s a ‘shovel-ready’ deadline for these projects, too, so it’s not a long-term, looking down the road 10 years from now, kind of deal.”

The city applied for the grant to build a pedestrian bridge in 2017 and 2018, but was denied both times. But Keith Benjamin, the director of the city’s Traffic and Transportation Department, believes that the 2019 iteration of the grant application is the strongest, yet.

“In our debrief with USDOT’s Government Affairs, we found out that our grant got the highest rating that you can possibly get in review and it did make it to the secretary’s desk,” says Benjamin.

Despite the strength of the current application, a competing application to improve an I-77 interchange near a planned facility for the NFL’s Carolina Panthers outside of Charlotte worries Zimmerman.

“My biggest concern is simply that I’d rather not continue having the bridge project get pushed to the side each year,” says Zimmerman.

In May, state lawmakers voted to back the Panthers’ venture to relocate team operations to S.C., dangling $160 million in tax incentives for a new headquarters in Rock Hill. The team also promises to bring 150 jobs to the area.

Benjamin states that there are plenty of factors working to the city’s advantage, even though the project has been pushed aside in the last two years.

“If you look at the NOFO [Notice of Funding Opportunity] for the grant — it’s the outline for how to offer your application properly — it specifically stipulates that no project can be above $25 million in their ask, and every state has the right to be awarded up to $90 million in awardings,” he explains. “So, even if another project in the state was making the highest level of request, there’s still more than enough room for our project to be seen as just as much of a priority.”

Building a separate pedestrian bridge will cost slightly over $22 million, according to Benjamin.

As Zimmerman puts it, things become “political,” by the time a grant application reaches the desk of Transportation Secretary Elaine Chao.

The current application has received letters of support from U.S. Sens. Lindsey Graham and Tim Scott as well as U.S. Reps. Jim Clyburn and Joe Cunningham. Zimmerman and Benjamin believe that support from elected officials is crucial to getting the application approved.

Attempts and plans to build a separate pedestrian bridge over the Ashley River have been discussed since 1976, says Benjamin.

“There have been 19 occasions, since 1976, various iterations that have said that a direct crossing for bike and pedestrian access needs to happen between West Ashley and the peninsula,” he explains. “This is not a new idea, this is not something that just came out of the blue.”

Additionally, recent statistics have made pedestrian safety difficult to ignore.

Charleston and South Carolina’s roads often turn dangerous for cyclists and pedestrians. A 2018 study from the Governor’s Highway Safety Association showed that S.C. had the fifth highest rate of pedestrian deaths in the country.

The South Carolina Department of Public Safety additionally reported in 2018 that Charleston was the most dangerous city in the state for pedestrians, with a total of 26 fatalities between 2011 and 2016.

Harry Lesesne, executive director of the Charleston Parks Conservancy, says that this project will improve access to the West Ashley Greenway and Bikeway. “For us, the grant is critical,” he adds.

Zimmerman adds that a pedestrian bridge could alleviate traffic and reduce emissions caused by vehicles.

Charleston City Councilman Mike Seekings believes that this project will bolster the local and state economies.

“This project is in the shadows of our hospital district, which is one of our largest employers in the state, certainly in the city,” he says. “And in terms of mobility and infrastructure, what’s good for a large city and its economy is good for the state of South Carolina. It’s one of many projects that show that multi-modalism is a community benefit on multiple levels.”

Seekings adds that, even if the grant is not received, “This is a project the city must build.” Without federal funds, the Councilman proposes partnering with Charleston County to use the half-cent sales tax to construct the bridge.

And as the city approaches a decade without receiving the BUILD or TIGER grant, Benjamin believes that the city is long overdue. “Charleston has not had its turn,” he says, “and we think that we’re putting forth an application that definitely exceeds the criteria of the grant.”