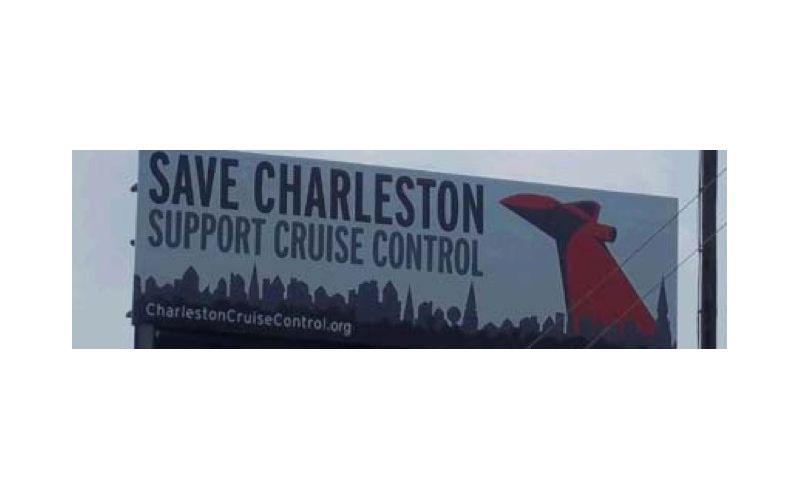 Proponents of increasing cruise-ship traffic at the downtown Union Pier terminal have raised the point that, early in Charleston’s history, tall ships were a common sight in the harbor. Carrie Agnew isn’t buying that argument.

“In 1670, those ships were not essentially floating cities,” says Agnew, a board member with the newly formed Charleston Communities for Cruise Control. “They didn’t have 9,000 parking spaces, they didn’t have yellow slides, and they didn’t have exhaust continually pumping into the air.”

Agnew’s organization, abbreviated as C4 and self-funded by members, entered the fracas over cruise ship regulation this week with a new billboard on I-26 Eastbound near downtown. The sign, which went up Monday night, features a Carnival cruise ship’s signature red fin jutting up over a quaint Charleston skyline.

C4 is not involved with the lawsuit being brought against Carnival, Agnew says, although she is personally involved as a member of the Ansonborough neighborhood association.

While the lawsuit focuses on purported building and tourism code violations on Carnival’s part, C4 is putting the screws on Mayor Joseph P. Riley Jr. to put legal limits on the number, size, and discharge of cruise ships in the harbor. They want the city to pass regulations, and not just make handshake agreements, to ensure that cruise ships use plug-in power while docked and do not dump sewage within 12 miles of the harbor.

The group is also asking the State Ports Authority to consider moving the passenger terminal from the downtown Union Pier to the lower-traffic, out-of-the-way Columbus Street Terminal. The SPA has already drawn up plans to renovate Union Pier for increased passenger traffic, but Agnew says she has not heard a satisfactory answer to why the Columbus terminal could not be remodeled for passengers.

What C4 is not about — and Agnew wants to make this abundantly clear — is shutting down the burgeoning cruise industry in Charleston.

“Charleston can say, ‘We want you to stay, but play by our rules,'” Agnew says.

At a July City Council meeting, Mayor Riley called the lawsuit against Carnival a rogue action and promised to throw the city’s support behind Carnival as a defendant.

“These people have sued to stop the cruise business, there’s no doubt about it,” he said.

Agnew says C4 has about 150 members so far, including people from Mt. Pleasant, West Ashley, and Sullivan’s Island, as well as Florida, California, and Italy. This is not just a concern for downtown residents, she says.

“Charleston has the opportunity to be proactive,” she says. “There’s a lot to be lost here. There’s a can of worms to be opened, and you can’t go back if you don’t make the regulations now.”