Circa brings their powerful, blurred line performance to the stage 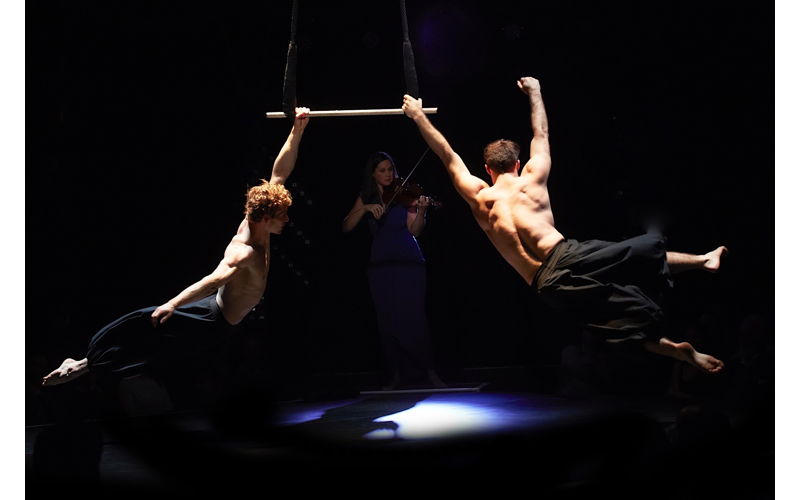 As our dizzying world feels increasingly topsy-turvy, it’s no wonder we seek escape in the arts. Spoleto comes none too soon this year — time to sink into the plush mohair seats of the Gaillard, or duck into the plenty charming environs of the Dock Street and be swept far away from political carping and environmental despair, into the realms of dance, music, and drama. Or better yet, at the humble Emmett Robinson Theater this festival season, all the above.

That’s where you’ll find the Australian circus arts company, Circa, holding forth in full drop-jaw dazzlement. Circa describes their performances as “a place where acrobatics and movement meld into a seamless whole. A celebration of the expressive possibilities of the human body at its extremes,” but it’s far more than contortionist and gymnastic revelry. The show, What Will Have Been, is a genre-busting amalgam of live violin music (Bach, Philip Glass, funky electronica) and interlocking bodies unlocking our imaginations to consider anew what our physical selves, and by extension, our imaginations and hearts, might be capable of.

As an international festival, Spoleto has long championed the largely Europe-based work of contemporary or nouveau circus, an art form with roots extending back to Roman times but more recently evolved in the late 1970s in Australia, Canada, and Europe. Charleston audiences have been wowed by Circus Flora, by Casus Circus, and Company XY, and I’m still reeling from last year’s awe-inspiring Gravity & Other Myths.

My guess is the circus arts have become a Spoleto staple for many reasons — for one, the tickets sell. The performances are typically shorter, casual, family-friendly, and one need not be a student of Wagner’s

Ring cycle or Shakespearean history to enjoy. There’s plenty of razzmatazz but also a narrative element and astonishing beauty, which makes for an evening of sheer joy and fun. Who among us doesn’t want to be amazed? To hold your breath (for something other than the latest White House tweet), suspend belief and bask in wonder?

The contemporary circus trend, beyond the theatrics of Cirque de Soleil, seems to be gaining traction in the U.S. as well. In 2017, the National Endowment for the Arts hosted some 200 U.S.-based circus artists and related professionals at the Smithsonian Folklife Festival to discuss the emerging state of the art form on this side of the Atlantic. It’s a promising moment of significant growth, according to Michael Orlove, who was then the NEA’s director of Artist Communities and Presenting & Multidisciplinary Works, and now heads the agency’s state, regional, and local partnerships and international activities. “As a performance art, as a grassroots movement, and as an agent for positive social change, whether it be expanding accessibility, inclusion, education, or health, it (the circus arts movement) has been incredibly exciting to witness,” he wrote on an NEA blog post.

And all the same holds true here in Charleston, thanks to Spoleto expanding accessibility and inclusion by bringing us the best of the contemporary circus troupes, and allowing us to catch the flying trapeze of this fresh and daring take on an ancient art form. Spoleto’s traditional base may remain grand-scale opera, chamber music, and classical ballet, but Circa invites us to limber up a bit. As none other than P.T. Barnum said, “the noblest art is making others happy.”

Spoleto moments stolen by our own hand-helds

For the final overview of the 2019 Spoleto Festival season, I suggest we remember the moments.

“One Thousand and One Nights” is filled with multicolored, mesmerizing moments