Cinematic gems buoy the dramatic Manchester by the Sea 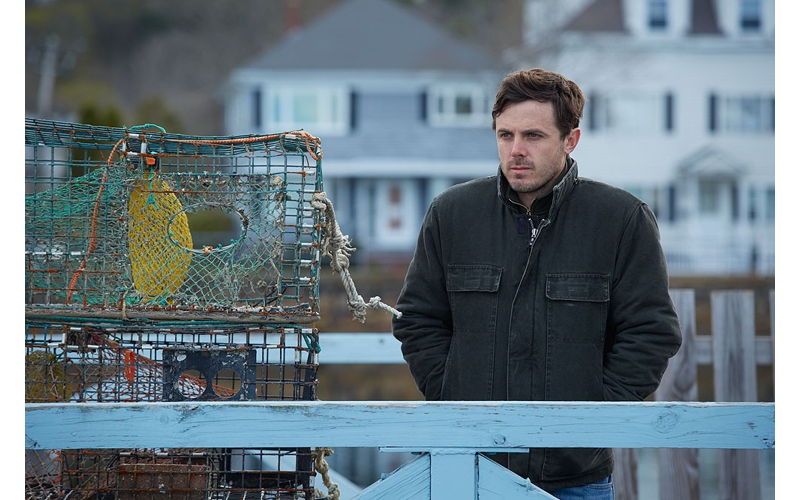 Heartbreak and resentment fill nearly every frame of Kenneth Lonergan’s emotionally charged drama that delves into redemption and atonement in ways that are so bleakly real and to the bone, it lingers with you days later — something few movies have done so far this year with the notable exceptions of Moonlight, Loving, and The Handmaiden.

Manchester by the Sea begins with the tedious anguish of unclogging a stopped up toilet. It’s immediately apparent that the handler of the plunger, Lee Chandler (Casey Affleck), suffers from more than just the stench of the task at hand. Lee’s a quiet inward man who toils as a handyman/janitor in Boston until his brother’s weak heart beckons him back to the town of the film’s title — a 40 minute scoot north —where we learn that Lee had existed before in happier and more prosperous times. The gorgeous seaside town itself becomes a story of two sides, the well-to-do living in stately green-lawned manses while the working class fishermen nestle up in cozy, but cramped cottages along pot-hole marred lanes. Lee’s past there is a ghost he doesn’t want to confront and the cold chalky grey of winter descending poetically underscores his aching dread.

By the time Lee gets through the Boston gridlock and to the hospital, his brother Joe (Kyle Chandler, quietly adding to a strong and growing thespian CV) has passed and Lee’s assigned guardianship of Joe’s teenage son, Patrick (Lucas Hedges) is confirmed — because there is no one else; the mother (Gretchen Moll) is a sot with whereabouts unknown. It’s a task Lee is apprehensive to take on, and even more so when the attorney suggests that Lee relocate back to the town for Patrick’s sake to finish out high school with his peers.

That may sound like a pat set up, but how it unfolds with the chemistry amongst the cast, the painful and all-too-real revelations, and the delicate weave of the narrative across timelines, is a matter of brilliant orchestration that’s as genuine as it is sharp. In small, carefully meted strokes, Lonergan takes us back to Lee’s former life with his then-wife, Randi (Michelle Williams) and their three daughters. Joe too is in a better place, working his trawler with his longtime friend George (C. J. Wilson) and dutifully rearing young Patrick (Ben O’Brien). We also get snippets of Joe’s wife, Elise (Moll) passed out and inert and Joe’s visits to the doctor where we learn of his rare, early onset of congestive heart failure. Lee’s earlier time in Manchester isn’t plagued with such hobbling distress, but his fall from grace, a small lack of judgement that anyone could have made, illustrates just how fine the line is between happiness and tragedy.

In the present thread, Lee slides slowly into his new role, occupying his brother’s cottage, looking for work, and regarding Patrick as something of a younger brother more than a youthful charge. He let’s the teen host house parties and allows girls to spend the night, when Lee starts to give Patrick the talk, the boy rolls his eyes. There’s a lot that’s not said between the two but communicated and that’s one of the film’s strong suits. Patrick may be in a vulnerable spot and Lee, not being a man of pity, understands this inherently. The most affecting relationship however grows in Lee’s reconnection with Randi. She’s moved on from their marriage (remarried) but the two have a long list of unresolved matters. Affleck, always a capable actor, does an impressive job of harboring the rage of self damnation just under the surface, yet ever palpably present, while Williams, who has two raw-nerved, knockout scenes, is nearly unrecognizable as the townie girl, one with a deep loyal heart and also one not to be messed with. The emotional currents the two actors summon up and share become a rare gem of synergy, an electric ebb and flow and something to be marveled.

Lonergan, who made his mark as a screenwriter of the Analyze This comedies, has had something of a unique journey as a director. His debut, You Can Count On Me (2000), another deeply intimate and affecting tale, that bowled audiences over at Sundance and brought Mark Ruffalo to the fore, signaled a prolific career to come, but his next film, Margaret, a tale about a troubled young woman (Anna Paquin) involved in a bus accident and its aftershocks, took 11 years to make it to the screen and was nearly buried by Fox Searchlight, saved in part, by protests from film critics groups eager to see Lonergan’s next vision. That ordeal certainly girded the filmmaker and the mettle of which is evident here. Lonergan’s films have always been about quietly struggling through adversity and inner turmoil while reaching out for that slim, ephemeral thread of human connection. Manchester by the Sea is about buried connections and unearthing them in the pursuit of catharsis and conclusion.