Christopher Cox and his chainsaw give new life to fallen trees 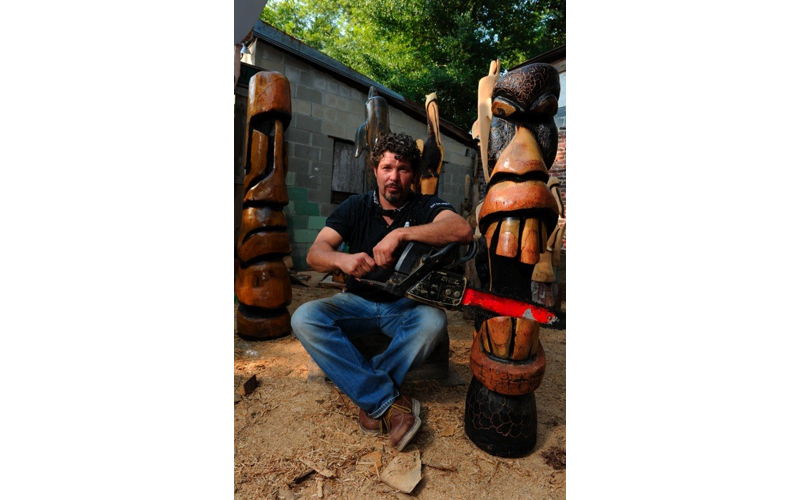 Christopher Cox found his calling in a roundabout way, starting with a college job and a chainsaw. A series of heavy hurricanes in North Carolina kept him busy, and he was able to pay for college by cutting down trees. “I was pretty good with a chainsaw,” he says.

After graduating, Cox left his native North Carolina to join his father, Earl Cox, in the political arena of Washington, D.C. The younger Cox worked with Dan Quayle, Colin Powell, and Elizabeth Dole before he tired of politics and decided, much to his family’s dismay, to follow the call of the saw.

He started artistic carving 10 years ago after he spotted a tiki head and wanted to see if he could make an even better one. He succeeded, and that was all it took to lead him away from the buttoned-up life of a politician to the bohemian life of an artist. He says he only misses politics when it’s campaign season. “It’s a very exciting world, and I met a lot of powerful people,” he says. “I’m not going to get rich carving wood, but I’m also not happier doing anything else.”

Cox spent the first year of this new life learning the fundamentals, then searched for world-class chainsaw artists and worked as an intern for several years. He says he is not in the business to make money and that his payments come in two forms: financial and mental. “When someone sees my work and says, ‘Wow, look at that!’ it’s a form of payment. That mental payment carries the artist through the slow times.”

Cox excels at carving sea turtles, dolphins, and pelicans from large cypress tree trunks. He explains that cypress trees are some of the oldest in the world and have the best reputation for weathering.

Tree services call Cox to let him know when they have cut trees available. “I’m like a Boy Scout looking for wood,” he says, pointing at a large walnut tree on the floor of his workshop that he drove to Virginia to collect. Cox says his carvings exemplify conservation because through his art, he is reintroducing the tree to society in a new way.

These days, when you spot his big red truck filled with a load of wooden carvings, you better act fast, because you never know when you’ll see him again. “People recognize my truck,” says the traveling artist. “I’m having an art show at every stop light, and every time I get gas.” For a while, Cox had a spot on Coleman Boulevard where he sold his carvings, but his dog bit someone and he had to leave. He’s currently in the middle of moving out of his warehouse on Coming Street, and he’s not sure where he’ll be next. “As an artist, you’ve got to be able to pick up and move,” he says with a shrug.

From January to May, Florida’s Marco Island and Virginia Beach are good spots for him to sell his work. His typical customers are locals who live at the beach and purchase his carvings for their yard and end up putting them in the dining room. With prices ranging from $100 to $10,000, Cox’s unique designs definitely go beyond the usual yard art. “I’m looking for people with deep pockets in Kardashian country,” he laughs.

The slow times inspire new ideas, and Cox’s latest venture is reality TV. With an on-the-spot demo of chainsaw flipping in his backyard, Cox explains how he is going to get the attention of producers with his idea for a show called Hard Wood. The show would feature some of the best chainsaw artists across the country. “It’s extreme art,” he says. “I want to turn it from an art into a sport, like logging on ESPN2. The carving is so fast — it happens right before your eyes. You take it from a log into a bear in 20 minutes, and it’s mesmerizing.”

Cox showed off his technique in a cage at the Southeastern Wildlife Exposition in February, and he says the crowds always grow in size when the wood chips start to fly. A recent video demonstrates Cox cutting the boots off his feet with a chainsaw. He hopes to get into the Guinness Book of World Records as a record-setter, because he’d rather be a setter then a breaker. “I want to be taken seriously,” he says, “but by cutting boots off my feet, I’ve got your attention and I can show you how trees are the building blocks of society.”