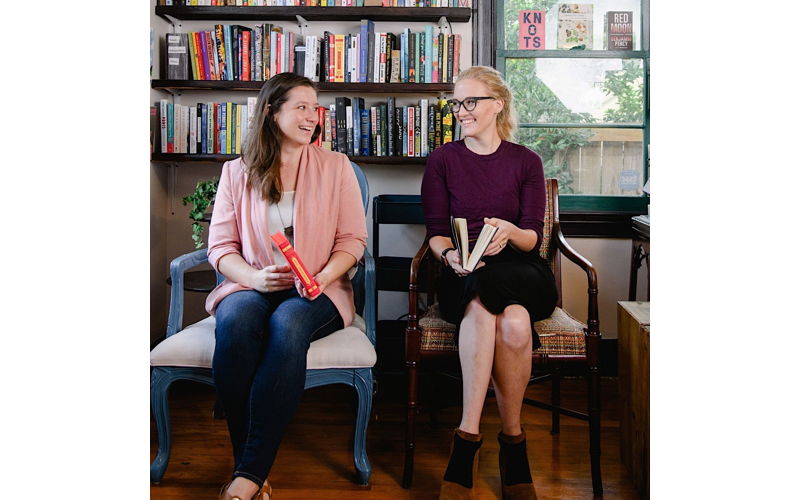 Maybe you’ve seen Viola around town: at the North Charleston Farmers Market, stationed out front of the Park Cafe, or at Park Circle’s Orange Spot Coffee. At a glance, the vintage camper, framed by charming book displays and an A-frame sign, might seem like just a novelty. But there’s a lot more to her than meets the eye.

As the mobile headquarters of the pop-up bookstore Itinerant Literate Books for the past three years, Viola’s owners, Christen Thompson and Julia Turner, explain that the little camper was always meant to be one part in a broader and more ambitious strategic vision. One that has culminated in the recent opening of their first permanent location in Park Circle, aptly named Itinerant Literate Bookstop.

Thompson and Turner first met at the Denver Publishing Institute (DPI), a month-long intensive summer program run by the University of Denver, where they would get a crash course in editorial work, production, magazine publishing, and university publishing. There they forged a friendship that would eventually evolve into a successful business partnership.

“Everyone coming in [to the program] wants to be an editor, but by week two they kind of warned us that we all weren’t going to want to be editors by the end,” Thompson, who studied English literature and creative writing in college, explains.

Uncertain of her own desire to make the move to New York at the program’s end, Thompson, whose boyfriend at the time had recently been offered a job as a subcontractor for Boeing, instead decided to set up some interviews with publishers in Charleston. “The place I ended up getting a job, History Press, was hiring, so it just worked out. That was in 2012.”

Soon after, Turner, who was also looking for work, joined Thompson at History Press, in their production department. Still relatively new to Charleston, the women spent a lot of time together. Chatting at the office and socializing outside of work, together they began to dream.

“It happened relatively organically. [Julia] moved here and we just chatted all the time. I didn’t really know anybody in Charleston, nor did she. So, we hung out a lot,” says Thompson.

Reading Shelf Awareness, the daily book trade-focused newsletter, which provides insider publishing info to booksellers, they started exchanging ideas. And while at DPI, they learned from Joyce Meskis, founder of The Tattered Cover bookstore in Denver. So much of their learning experience had been filtered, Thompson says, through the lens of the bookseller, which helped plant the seed.

“We started asking each other ‘Oh did you see this? Did you see that?’ and started collecting the ideas we liked in a Google doc. We were like, ‘I wish there was a bookstore doing something like that here.’ And eventually the question became, ‘What if we owned our own bookstore?'”

Knowing that book sales is not a high-margin industry, a fact that they credit in part for the current dearth of bookstores in downtown Charleston, where rents continue to soar, Thompson and Turner knew they would have to get creative.

“You have to be very, very careful opening a bookstore, and we didn’t feel like we had the knowledge base to really go into it without having done on-the-ground research and gaining experience,” says Thompson.

Ever strategic in their thinking, Thompson and Turner were aware of successful restaurants across the country that started out as food trucks. Recognizing the significantly lower financial commitment, they landed on the idea of adapting that business model into a bookmobile.

Says Thompson, “With the bookmobile, the idea was to use it to prove the concept was viable to be able to get a loan. We thought it would also allow us to test out different neighborhoods before we opened a storefront, if that were to happen. And that is exactly what happened.”

Both book lovers from an early age, having their own bookstore means more to Turner and Thompson, however, than the realization of a well-executed business plan. Thompson lovingly describes her early experiences in bookstores. And while it wasn’t independently-owned, she recalls the importance of being able to, as a self-described awkward kid, go to Barnes & Noble and hide among the stacks and explore subjects she was interested in.

“We think that’s the role a bookstore should play, a place where people can gather and find their community and parts of themselves. And a place where kids can go, no matter who they are, no matter the circumstance, because we were those kids.”

A part of creating that environment is developing programming that the community can enjoy, which Turner says has been one of the most gratifying parts of owning a bookstore. One example is their daily storytime, which happens at 10:30 a.m. and is free and open to the public. In addition, they host regular local author signings, and starting Fri. Aug. 24 they’ll host their first Speakeasy Open Mic night, where, every fourth Friday of the month, members of the community can come and read or play their original work in the bookstore’s backyard.

For book lovers who also love a good cocktail, keep an eye out for an event Thompson mentioned is still in the works, which will pair local beer, wine, and spirits with a good book. Imagine: champagne and The Great Gatsby or red wine and The Vampire Lestat.

Representation is also important to this powerhouse duo, which means when you walk into the Bookstop you won’t have to search long for wonderful works by women writers and writers of color. With subjects ranging from food and body image issues like Roxanne Gay’s Hunger to Charleston’s history of and relationship to slavery, race, and memory in Denmark Vesey’s Garden, they have you covered.

If you’re looking for recommendations, they have those, too. Consider Circe by Madeline Miller, a tale of ancient Greek mythology, where a powerful young woman — half titan, half nymph — dares to challenge the gods. Or the debut novel, Any Man, by actress and writer Amber Tamblyn, which tracks its female protagonist, a serial rapist, as she hunts for men at bars, online, and at home.

Whatever you do, don’t count out Viola. She’ll still be making the rounds to local spots around Charleston, but will make her home, along with many others, surely, at the Bookstop.