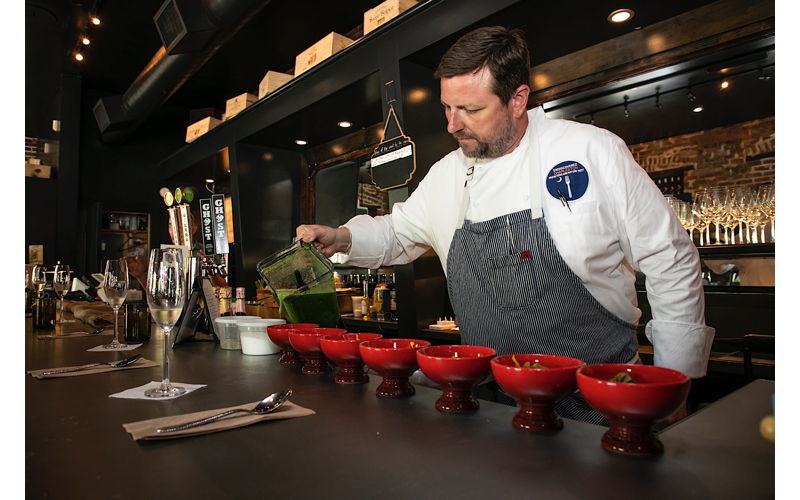 Chef Forrest Parker (aka Gump) asks us to meet him at the Pineapple Fountain at 10 a.m. on a mid-July Saturday morning. This gives him just enough time to get to the farmers market to pick up local, seasonal ingredients like chanterelles and heirloom tomatoes for the lunch he will later prepare, drop his haul off at Bistro a Vin, and meet our group at the fountain for a two-hour walking tour ahead of the midday heat.

He has a small group of five today — an ideal size for navigating narrow sidewalks and historic alleyways (though he says he can handle groups of up to 16 or 20).

Parker is not one of those overly animated or hokey guides that goes on about ghosts and Yankees in an exaggerated drawl. The entire experience feels more like a laidback chat with a knowledgeable chef-historian than a scripted performance. He’s simply himself — Chef Forrest Parker, history, culture, and cuisine devotee — who spends more time championing the city’s culinarians than speaking about the more than two decades of achievements under his own chef’s hat. “I want to evangelize,” he later says. “I’m getting out of the game. It’s very clearly not about the ‘me’ show. It’s about the ‘we’ show.”

So what you may not hear him say is that in 2016, Gov. Nikki Haley selected him as South Carolina’s Chef Ambassador. He’s also the only licensed and certified chef tour-guide in Charleston. He’s done extensive work as an agricultural archaeologist and has studied and helped revive a number of heirloom varieties. You can read about them on Undiscovered Charleston, a blog that he’s maintained since 2011. He even hopes one day to write a book detailing Charleston’s culinary history.

At the top of his tour, Parker explains that there’s a recurring theme of restoration and revival in Charleston in both its history and cuisine. He speaks of the reintroduction of heirloom seeds across the Lowcountry and of the restoration of Carolina Gold Rice. The locally treasured golden grain became nearly extinct following the Depression until several decades later when a Savannah farmer secured seeds from the Department of Agriculture’s seed bank and renewed the crop in Charleston.

We make a stop at The Tavern at Rainbow Row — the oldest liquor store in the country that’s been in business since 1686 — so Parker can point out the window display of spirits produced from heirloom varieties: Bradford Family Watermelon Brandy and High Wire Distilling’s Revival Bourbon made from Jimmy Red Corn.

Somewhere near Elliott Street, we observe earthquake bolts shaped like crosses, circles, and stars that are secured into historic buildings. Charleston, he says, has survived disasters of biblical proportions including but not limited to earthquakes, flood, and fire, yet the city’s relentless spirit has sustained it.

As we turn down Longitude Avenue (which actually runs in a latitudinal direction), Chef Parker points out the Resurrection Ferns clinging to trees as a metaphor for Charleston’s endurance. The ferns wither brown and curl into themselves during times of drought, but their death is deceptive. As soon as water reappears, they “come back to life.”

We pass by the Old Slave Mart Museum. “It’s not a feel-good experience,” he says, “but for us, it’s a necessary one.” The out-of-towners ask thoughtful questions about how locals feel about the darker side of our history. One tour-goer appreciates that Chef Parker addresses the subject with reverence rather than avoiding it altogether as another tour she went on had.

We eventually wind our way to Queen Street where brunchers sip bloodies at Husk and Poogan’s Porch. Parker points out a larger-than-life mural by David Boatwright depicting 14 of Charleston’s greatest chefs and culinary minds — including chef/writer Nathalie Dupree, Gullah chef Charlotte Jenkins, and FIG/Ordinary chef Mike Lata — assembled around a table filled with wine and in deep discussion.

The tour portion ends and the three-course feast begins at Bistro a Vin, the wine bar sister to Cafe Framboise. Blessedly, A/C, a dispenser filled with ice water, and chilled towels await us.

Owner Dominique Chantepie agreed to let Chef Parker use the space during the day for his tours as long as the bistro could return to “smelling like wine instead of food” by evening. Chantepie slips in and out between courses to pour and discuss wine pairings — each glass is, of course, deliciously French.

We settle at the bar and Chef sets to work making Santa Elena-inspired gazpacho with heirloom tomatoes, bell peppers, cucumbers, sherry vinegar, and olive oil and finished with sunflower sprouts, marinated hearts of palmetto, and smoked Spanish paprika. It’s a flawless and refreshing first course on a hot day.

While he works, cooking on portable burners from behind the bar, he tells us how Undiscovered Charleston began. At this point, the company has been in business a little over three months. Chef says he’s nervous, but happier than ever.

“As a first-time entrepreneur, I have to learn the ins-and-outs of web design, SEO for sales and marketing, and all the fun stuff that goes with it. It can be scary, but I didn’t want to stop being a chef and start being a tour guide. I wanted to do both.”

His last chef gig was with the Vendue’s Revival. After making the decision to leave, he lost stress and weight. “It’s nice to have a quality of life. It’s nice to see my wife. Every morning, I wake up and make coffee at 5 a.m. and make her breakfast. And every day when she comes home, I have dinner made for her.”

After the gazpacho, we feast on Bill Neal’s classic shrimp and grits recipe made with the bright, nutty, orange chanterelles Parker picked up that morning. The third course is a flavorful chicken and sausage pirlou made with (can you guess?) Carolina Gold Rice, which Parker cooks up to form a crunchy, thick golden crust at the bottom of the pan. All the while, Chef chats casually about the history of the dishes and the cultures abroad that have influenced Southern cuisine — how Carolina Gold Rice is related to Indian Basmati and how piccalilli and chow chow came from Indian and Caribbean influences.

“It’s so important to be able to take a contemporary look back, and see where we came from,” he says. “There are so many different paths that our cuisine could have taken.”

Find out more about Parker’s upcoming tour dates at undiscoveredcharleston.com.