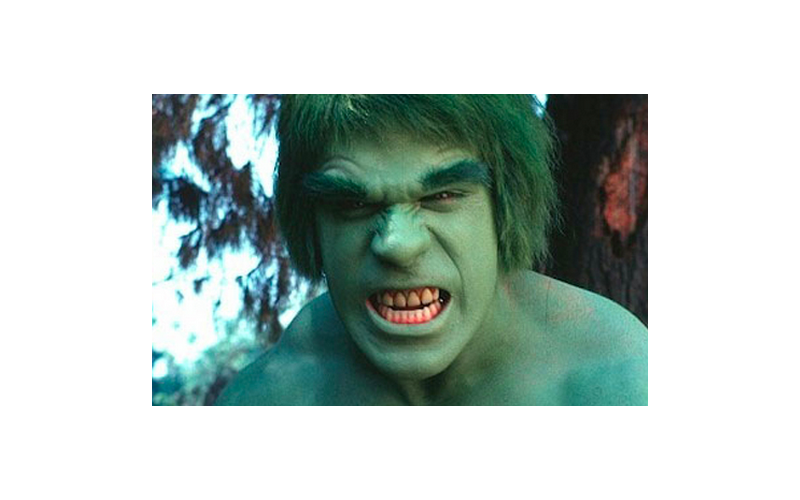 I love the color green. Whether it be the wavy arms of Kermit the Frog, the big ears of Yoda or the reptilian hands of Stripe the gremlin, green played a crucial part in all things awesome from my childhood. Of course, no dissertation on the color green would be complete without mentioning Marvel’s angriest creation, the Hulk. My first exposure to the Hulk was none other than the CBS television series, The Incredible Hulk, which aired in the late 1970s. I know the intro like the back of my hand: the foreboding narrator, the gamma ray machine, Bill Bixby’s Dr. David Bruce Banner declaring “Mr. McGee, don’t make me angry. You wouldn’t like me when I’m angry.” And, most notably, the inner turmoil Banner felt while changing a tire in the rain that turned him into the Hulk. (Apparently tire-changing is the No. 1 cause of all Hulk transformations.)

Since there was no CGI back then, the producers turned to a real-live human being to play the Hulk. That human being was none other than Lou Ferrigno, a former Mr. Universe winner. Needless to say, when kids thought of the show, it wasn’t the trickling piano or Dr. Banner’s love for thumbing rides, but the moments when the green guy would tear da club up.

Thanks to Ferrigno’s performance, the Hulk became a personal obsession. Only afterward did I found out there was this comic book that the TV show was based on. Apparently, Hulk hung out with a bunch of other heroes like Thor, Captain America, and Iron Man, but personally, they could never hold a candle to Hulk’s badassery — thanks to Ferrigno’s contribution. Yes, he mostly just growled while breaking random shit and wore a pure yak hair wig and green body paint that would drive Joan Rivers to wretch on the red carpet, but Ferrigno’s performance was pretty radical to me.

Speaking from a phone while en route to a gig, Ferrigno himself gave me a little behind-the-scenes info on the show. “They had done a worldwide search for someone to play the Hulk,” he says. “They had eventually decided to pick Richard Kiel (a.k.a. Jaws from the James Bond series) for the pilot movie for the series. Eventually, they decided they wanted someone else, so they had me come in for reshoots where they replaced all his scenes with footage of me.”

When the series came to an end in 1982, Ferrigno continued working within the confines of action and adventure films. A personal favorite was the Hercules series from the mid-’80s, films that were full of brawn, bunk effects, and dialogue worthy of a good round of alcohol-induced Mystery Science Theater 3000-style riffing. It may be blatant bias, but Kevin Sorbo, Arnold Schwarzenegger, and Steve Reeves’ takes on the titular Grecian beefcake can’t touch Ferrigno’s. After I told him my favorite Ferrigno film was Hercules 2: The Adventures of Hercules, Ferrigno shared his own preference, which was a bit different but awesome nonetheless: “Personally, my favorite dramatic role was in this movie I did with Reb Brown called Cage.” In that film, released in 1989, Ferrigno starred as a heroic Vietnam vet who suffered from brain damage after rescuing a friend.

At the age of 60, Ferrigno is still a buff dude. His commitment to staying fit rivals that of the average shmoe. “My workout regime is five or six times a week,” he explains. “I split that time up doing cardio and weightlifting.” Recently, he was on the latest season of Donald Trump’s Celebrity Apprentice, but got fired a few weeks back, so unpleasant questions regarding the show and its douchebag host were quickly dumped since they could make Ferrigno angry. And you wouldn’t like Ferrigno when he’s angry.

Nerds of the Charleston area can throw on their dirty, ragged Hulk underoos and jump for joy when Lou makes a guest appearance at Cinebarre for the opening day premiere of The Avengers (Ferrigno provides the voice of the Hulk in the film), where he will sign autographs, take pictures, and answer questions from the audience. Nerd up.

Ferrigno will sign autographs, take photos, and answer questions at Cinebarre (963 Houston-Northcutt Blvd.) on Fri. May 4 at 6:30 p.m., before the screenings of The Avengers at 7 p.m. and 7:30 p.m. For tickets, visit cinebarre.com.