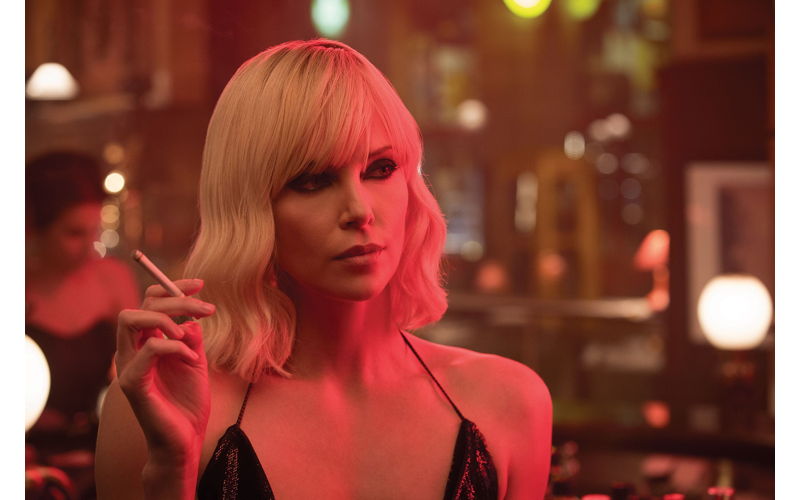 Action and intrigue abound in this hyper-stylized spy thriller that takes the former quite seriously, boasting some of the best fight choreography on screen in recent years and a car chase worthy of Baby Driver. It’s also violent as hell and makes no apologies as it punches its way through end-of-the-Cold War Berlin — on the eve of the Wall coming down — where a crucial “list” of British intel assets is up for grabs with the KGB, MI6, and other interested middlemen locked in a bloody game of chess to procure it.

The driving fear at British HQ is that if the list falls into Russian hands, it could extend the Cold War by decades, and while that might have factored mightily in Antony Johnston and Sam Hart’s 2012 graphic novel that the film’s based on, The Coldest City, it’s nothing more than a McGuffin here and a catalyst for Charlize Theron’s MI6 operative, Lorraine Broughton, to drop from one gonzo battle royale to the next — even a same-sex hookup in a night club bathroom ends at the barrel of a gun.

The film begins inauspiciously enough as a British agent with the list on his person is stalked through the streets of Berlin and taken out smash-bang style. We then catch up with Lorraine 10 days later in London rising naked out of a tub of ice and covered in bruises. The connection between the two events and the framework for the film becomes a jigsaw puzzle of slow reveals fed to us in flashback snippets as Lorraine’s debriefed by her MI6 higher up (Toby Jones, who seems made for the part) and a curmudgeonly CIA handler (John Goodman). Part of the fun here is drinking in Lorraine’s sultry resistance to their inquiry, which bears a certain familiarity to Sharon Stone’s Catherine Tramell — another can-do blonde under the thumb of authority — in Paul Verhoeven’s Basic Instinct.

As intriguing as that cat-and-mouse mind game is, it’s not until we get to Lorraine touching down in Berlin to hunt for the list and syncing up with fellow MI6 agent James Percival (James McAvoy), who’s gone “feral” according to his handlers, that the film generates real pyrotechnics. Russians latch onto Lorraine the second she’s off the plane and that’s where we get the first glimmer of her resourceful resolve, employing a stiletto-heeled red pump to take out three goons at 70 MPH — she’s one part James Bond and two parts Jason Bourne. Percival, who shows up late to the scene, proves to be the film’s ever-evolving wild card, holding back information and dabbling in a side business of selling Jack Daniel and Jordache jeans on the black market. Just where his allegiance lies remains ever sketchy, and he quickly floats the specter of an enigmatic entity known as Satchel who appears to be playing everyone from behind his murky veil.

Needless to say there’s a lot of shifting sand — Lorraine even gets saddled with a Stasi officer who’s memorized the list and wants to come in (Eddie Marsan) — and while it all plays out logically and neat, Robert Ludlum or John le Carre this is not. Given the era, director David Leitch drapes the film in neon punk and astutely leverages the zeitgeist, East German hipsters breakdance to Public Enemy’s “Fight the Power,” Percival has a self-described Sinead O’Connor coif, and when Lorraine extricates herself from that ice bath, Bowie’s “Putting Out Fire” cues up stirringly so. Nena’s “99 Luftballons” even gets a campy play before the boom box it’s emanating from gets unceremoniously smashed, which is nothing compared to the beatdown the skateboard punk who owns it gets.

The film, however, is all about Theron and the camera hangs on her adoringly — almost stalkerly — so. The comely actress, who’s played with and against type — most notably in her Oscar win as serial killer Aileen Wuornos in Monster — clearly spent hours in the gym getting into peak shape for the part. There are two bravura, near single take, scenes — one that casts shades of the grueling Old Boy hammer march — as Lorraine takes out Russian hitmen and German police officers in bloody hand-to-hand combat that’s punctuated with such realistic flourishes, the combatants, panting and bleeding profusely, pause to catch their breath before resuming the arduous death struggle. Leitch, who cut his teeth as a stuntman and is relatively new to the director chair (he has an uncredited credit on John Wick), works to make the hyperviolence bone crushingly visceral. The result is both enthralling and exhausting to digest. At the end, you wonder how Theron had the stamina to do it all — a triathlon might be easier — and if Matt Damon at his Jason Bourne best could even match her. The one question that lingered for me as the credits rolled was, “Is this a one off?” It feels like a franchise in the making, but the Cold War is over, and Lorraine is tethered to that era, but so was Bond and he’s persisted; then again, many men played 007. Given the context of Lorraine, there’s just no Atomic Blonde without Theron — no way, no how.