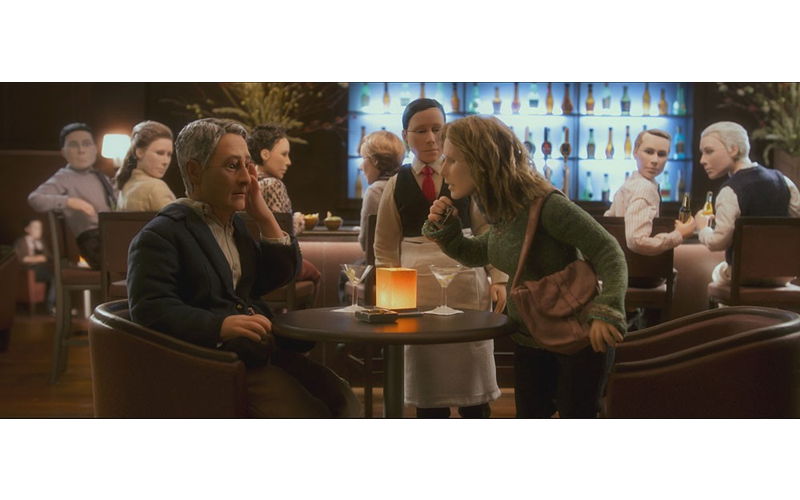 Charlie Kaufman, the writer behind Being John Malkovich, Adaptation, and Eternal Sunshine of the Spotless Mind, has always been something of an art-house anomaly when it comes to delivering quirky curios that sate the highbrow quest for something different and challenging. His latest, Anomalisa, certainly fits the bill.

The film is a stop motion-animation journey into the psyche of a self-centered motivational speaker who may or may not suffer from some form of psychosis. It’s slow moving and mundane yet profoundly unearthly as it plumbs the human condition and the eternal quest for fulfillment.

The project, which Kaufman originally conceived as a sound play (think a podcast or radio) for composer Carter Burwell and the Coen Brothers, came to life via a Kickstarter campaign and a partnership with stop-motion animator Duke Johnson, a man with such credits as Mary Shelley’s Frankenhole on his CV.

The cast too is limited — there are just three performers. David Thewlis and Jennifer Jason Leigh voice the two leads, while character actor Tom Noonan speaks for everyone else — women, men, and children. It’s a strange olio shoehorned into a rather regular tread as Michael Stone (Thewlis), a customer service expert, British ex-pat, and something of a minor celeb (author of How May I Help You Help Them?), flies into Cincinnati to give one of his speeches at a convention. Everything is a bit off as Michael lands. The male singers behind the choral music on his iPod are horribly out of sync. Everyone speaks with the same voice (Noonan’s) and has the same general facial profile regardless of age, gender, or physical size. And when he gets in a cab desperate for a cigarette, there’s a no smoking sign because the driver is asthmatic.

Lisa and her travel mate are customer service reps at the convention for Michael’s speech. They are both in awe of him. Given Michael’s aloof demeanor, it seems improbable that a nervous yet chatty wallflower like Lisa would draw his attentions, but as a result of Thewlis’s deft emotive inflections, there’s a clear loneliness present under Michael’s hyper-critical voice. In a later scene after Michael declares Lisa, his Anomalisa (“anomaly” plus “Lisa,” get it?), he abruptly derides her for clanking her teeth on her fork while she eats among other control-freakish nits. If Michael weren’t so flawed or didn’t have small moments of empathy, he might just come off as a bloviating philanderer leveraging his station in life, but Kaufman clearly loves the troubled character and develops him with care and nuance.

The strange, pedantic tenor of Anomalisa works to its advantage, as it becomes hypnotic and intoxicating in much the same way as Richard Linklater’s animated slacker flick Waking Life did. The blurred lines between reality and delusion and the dicey credibility of Michael’s POV offer rewards, as does the animation’s overall orchestration, which is nothing short of genius. You’re likely to get pulled from the story wondering just how the filmmakers got the puppets and their environment to line up together so seamlessly on film.

Anomalisa will certainly not be to everyone’s taste, but it is a trove of complex reflections delicately interwoven with masterful puppetry. Wondrous and eerily somber, Kaufman’s latest quirk offers much for curious minds.