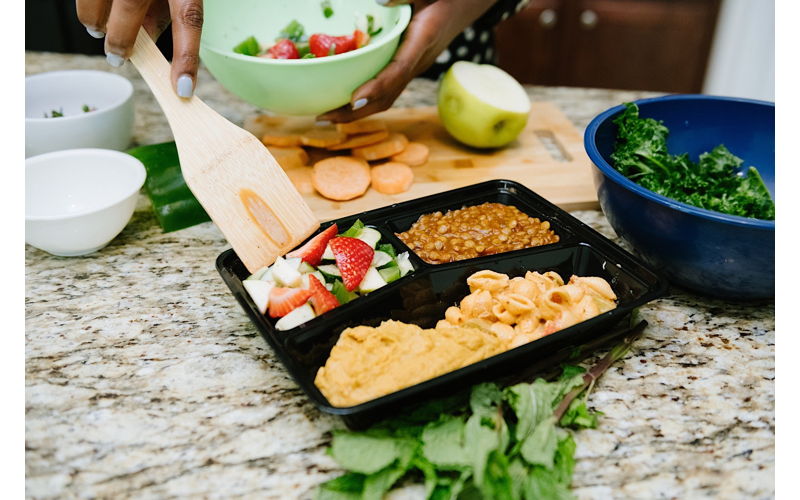 “I really have a passion for healing the community,” says Shaquille Fontenot, the entrepreneur behind the newly created Fairy Fresh Foods. The company offers weekly deliveries throughout the city and surrounding areas and prioritizes playful ingredients and variety. After all, eating healthy is easier when it’s fun. “A lot of the meal preps that I’ve seen can be really boring. I don’t want seven versions of the same meal,” she says. But what really differentiates her company (other than the fact that choosing them means supporting a local business) is their profound mission to educate and to heal the community through cuisine. Fontenot says she’s seen discrepancies between neighborhoods in the availability of nutritious options. She’s hoping to close that gap.

Eating healthy can be expensive or complicated if you don’t know how to navigate the ingredients or if the resources aren’t attainable. “Access to affordable, delicious, and healthy food should be as much of a human right as access to clean water. As a country, we need to change our diets which would change how our kids grow and how our communities work,” says Fontenot. “If people had better options available, they’d use them. People care about their families and their lives and their bodies, but nutrition isn’t always accessible. I keep that in mind when I create my menus.”

Fontenot found her passion after moving to Louisiana to teach underprivileged students following her graduation from Clemson. She was exposed to unjust cafeteria systems where healthy lunches were nonexistent. “That food had no nutritional value,” she says. “I became really interested in learning about affordable, nutritionally dense cuisine that would be accessible to lower income communities. I wanted to show people how to best use what’s available to them, so they could sustain healthy lifestyles in a meaningful way.”

But what really drove her passion home was her own journey toward healing through food. While in Louisiana, she began to develop mysterious symptoms that left her hanging on by a thread. Doctors tested her for lymphoma, and in addition to her other symptoms, she’d been exposed to black mold. “That whole experience really drove me to look at naturopathy and holistic ways that I could heal myself and my body.” Learning how to utilize food as medicine became her escape route.

“I went from pretty much almost dying to being more vibrant in every way. I had improvements in my health. I finally got the mold out of my system. I’d been very anemic, but my blood count came back to normal. It’s very difficult, from a psychological standpoint, to pull yourself out from that because all you can see is the bad. But then, when you’re on the other side, you’re like, ‘Wow, how can I make sure other people don’t have to go through what I went through?'”

After returning to Charleston, she began making moves to share her discoveries with the community. Fairy Fresh Foods is relatively new, but she’s already seen a big response. “We’ve only been operating for a few weeks now which is crazy because it’s really been blowing up very quickly. It’s kind of scary, but we’re so excited.” Fontenot has big plans for partnerships and pop-ups to help expand the company’s reach. They’re reaching out to community centers and churches. They’ve teamed up with East Side Soul Food to introduce their new plant-based concepts to the restaurant’s existing customer base. They hope to collaborate with farms and community supported grocery programs. “We’re still fleshing out all of these ideas, but in our infancy, we’re growing very quickly. We’ll keep adapting to the market,” says Fontenot.

On Sun. Aug. 4, Fairy Fresh Foods will host their first pop-up at East Side Soul Food from 10 a.m.-3 p.m. If you’re curious about the company, this is a great opportunity to get a taste. Meals will be served takeout style, so plan to order ahead at fairyfreshfoods.com and pick it up there. (And they’ll have a few additional options on hand for those who just show up.) Menu items will include breakfast tacos with a tofu scramble, black beans, vegan chorizo, sour cream, and guacamole; a banana bread cinnamon roll; sweet potato hash with peppers and onions; and vegan crab cakes served with smoked onions and kale over grits.

Most importantly, Fontenot’s vision has heart. She’s motivated by making a difference, and she works to care for the unique needs of the recipients of each meal delivery. Bodies heal and respond differently. “When you’re in any holistic cuisine or medicine, you have to consider the individual because not everything is going to work for everyone,” she says. “I’m constantly switching it up — my model, my menu, my life. You have to adapt. You have to understand that just as you shift and change, so do the people around you. We want to be there to support that process.”