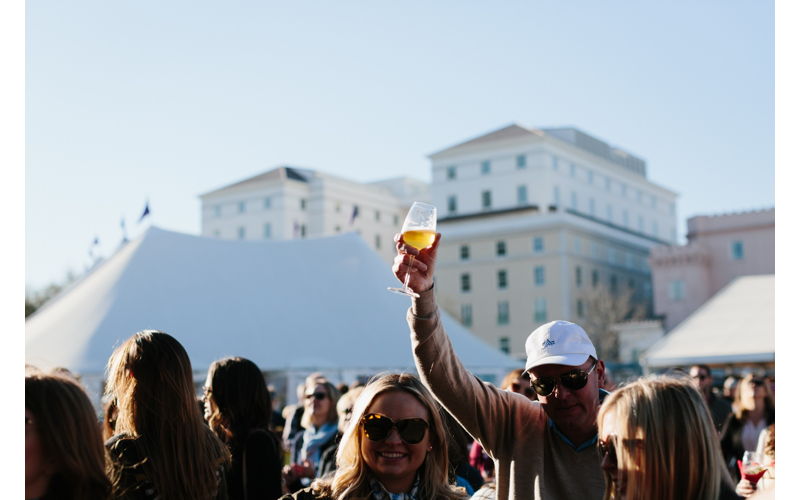 Schedule live now, tickets on sale this Wed. at 8 a.m.

Charleston Wine + Food Festival executive director Gillian Zettler says that the Culinary Village in Marion Square, “is the gateway to Charleston Wine + Food.” When tickets go on sale Wed. Aug. 28, it will buy you five hours of tasting and sipping from dozens of chefs and provisioners along with chef demos, live music, and other entertainment.

“But intimate storytelling experiences are really important, too,” she says.

As during prior festivals, some of the marquee events for 2020 feature out-of-town and local chefs pairing up to create signature dinners. One highlight this year, dubbed “The Italian Situation,” brings Andy Ticer and Michael Hudman of Memphis’ Andrew Michael Italian Kitchen to Home Team BBQ, where they will team up with Aaron Siegel to blend Italian flavors with the smoke of Southern barbecue pits.

Other notable out-of-town guests include Melissa Perello of Frances and Octavia in San Francisco, Michael Anthony of New York’s Gramercy Tavern, Neal Fraser of Red Bird in Los Angeles, and Alon Shaya of Saba in New Orleans, to name just a few.

This year will see the return of some old fan favorites, like the Waffle House Smackdown, in which two teams of chefs don paper caps and race to cook the beloved chain restaurant’s short order staples.

But there will be plenty of new ideas, too.

One is Night Bazaar, which will be held at Holy City’s new brewery in North Charleston. On Thursday, Friday, and Saturday nights, the brewery grounds will be transformed into a multicultural market with food stalls offering bites from around  the world along with live music and wine, beer, and internationally themed cocktails. “People are really craving that global influence,” Zettler notes.

At a lot of food festivals, most of the events occur in a single centralized venue, but Charleston’s has long been notable for its geographical reach.

“We love King Street,” Zettler says. “But there’s more to Charleston than King Street. We’re really spread out this year.” In addition to the North Charleston events, she points to the Sea Island Lunch at Wild Olive on Johns Island and the Cans & Kegs at the Patriots Point Links, which will highlight canned and kegged wine.

You don’t have to wait until March to get in on the action, either. Advancing the goal of more year-round activities, the festival will host a series of workshops and seminars in their test kitchen in the months leading up to the main event.

First out of the gate on Sept. 24 is “Not Yo’ Momma’s Casserole.” Jessica Murnane, author of One Part Plant, will lead a hands-on cooking class focused on making fresh, contemporary versions of casseroles. Other entries include John Zucker on roasting the perfect chicken, Janice Hudgins of Little Miss Ha on making traditional Vietnamese pho, and, for the holidays, seminars on cookie-making from Brian Hart Hoffman of Bake from Scratch magazine and NYE Champagne guidance from Miles White and Femi Oyerdian of Graft. All the events culminate with participants sitting down for a shared meal and, as the festival team likes to put it, “thoughtfully paired beverages.”

The prices on some of the hot tickets (including for the Culinary Village) have risen over the years, but Zettler says the festival is trying to balance those out with more accessible events. She points to the new Happy Hour series, which, she says, “will have a little bit of that pop-up vibe.” Held Thursday, Friday, and Saturday from 4 to 6 pm, a $45 tickets buys drinks and small bites at local bars like The Royal American, Babas on Cannon, and Faculty Lounge. There’s also a local ticket price for the Night Bazaar, too, which knocks 30 bucks off for Charleston residents

You can check out all the options today at the Charleston Wine + Food website.