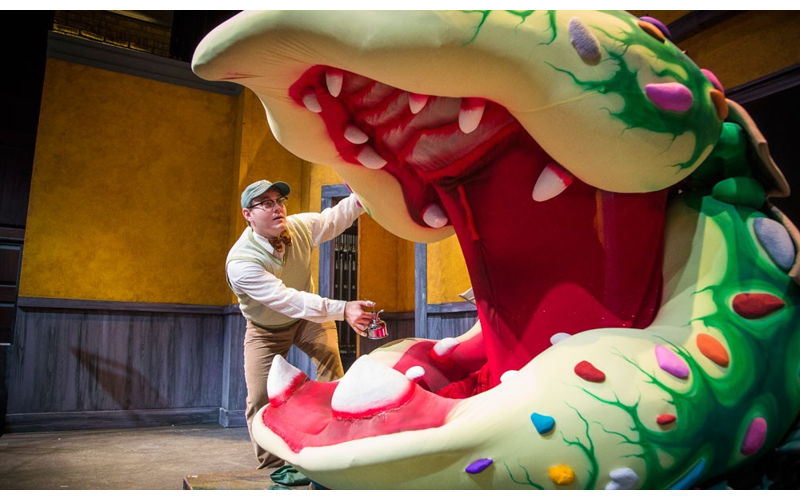 It’s the last day of Charleston’s “Aquageddon” and there are a couple of inches of water in the Dock Street Theatre pit, but the resident cast of Charleston Stage’s upcoming Little Shop of Horrors has more on its mind than a little water — like how to wrangle a giant man-eating plant.

Little Shop of Horrors, for the one person on the planet who hasn’t seen the play or movie, is the tale of Seymour, an underdog in love with a sweet young thing named Audrey, who is herself an underdog trapped in a relationship with a violent boyfriend. The two work in a plant shop, and Seymour gains notoriety after finding a freakish plant whom he names “Audrey Two” after his true love. Seymour has to balance his desire for people-pleasing with his plant’s desire for people-eating.

“We were able to get the puppets used during the Broadway tour, and they are gorgeous,” director Marybeth Clark says.

The four puppets that play Audrey Two during her different phases of growth are probably the most challenging cast members, gorgeous or not.

“The first two [puppets] are kind of what I expected, but the fourth had to be delivered and fork-lifted into the theater,” Clark says. “She’s so big she had to stay there, we couldn’t get her into the rehearsal theater.”

The largest puppet works with a counterweight system, but it’s so heavy Clark told Nathan Burke, the show’s puppeteer, that he was going to be “really buff” at the end of the run.

Unfortunately the audience won’t see Burke’s ripped physique. Burke’s role is to be planted inside the plant while actor Josh Harris performs the voice of Audrey Two. Burke says both actors are charged with bringing Audrey Two to life.

“It’s all about not being afraid of uninhibited movements and using as much energy as I can,” Burke says. “Josh does a lot of fun things with his voice. The script is really good and it’s all about syncing up with Josh’s voice.” He adds, “I can’t make a face, so I’m trying to find ways to mimic what someone would be able to show on their face but put it into their body, and make it look like a movement a plant would do.”

Burke says he differentiates the movements that are sympathetic from Audrey Two’s more menacing moments. “Those movements are slower and not as sharp or menacing as when things get dark and people start dying and getting eaten,” he says. “It’s fun, though.”

Being Audrey Two brings with it other physical challenges. Clark says the puppet is so hot that she thought Burke was having an allergic reaction to the costume when he emerged red-faced. The solution? An “ice shirt” lined with ice packs to keep the actor cool inside the giant plant.

Burke isn’t the only one with challenges, his co-stars have to pretend Audrey Two is an actual man-eating plant.

“It’s hard to find that perfect balance so [Audrey Two] doesn’t upstage you,” says Kent Reynolds, who plays the hapless Seymour. “You have to act like it really is this plant talking with me.”

Reynolds says that he’s almost convinced himself that Audrey Two is real. “I can actually feel the puppet having emotion, which is really strange, but the puppet does have a life of its own and I sometimes forget there’s a person sitting inside of it,” he says.

Although Little Shop of Horrors has been around in one form or another since the 1960 movie came out, Clark says there are some upgrades that Charleston can look forward to with this production.

“We really are excited to have the revival score, so the music is much improved, and we have a really fun, really solid resident company performing this,” Clark says. “They don’t always release the revival scores right away, so most companies are working off the old original script from 1982 off-Broadway. Like a lot of things we do, the show will have enough of what you want, but you will be intrigued or surprised by parts you may have overlooked before.”

Clark hints, “It’s set in the slums of New York, but there’s talk of what could happen to the world, and Charleston is part of the world. So we might have snuck a little bit in there.”

But when it comes down to it, it’s a team effort to help the audience suspend disbelief during the musical comedy. Clark says the actors, the set, the costumes, the music all help enrich the show.

“I have a really good sound designer,” Clark says. “Of course, I do get emails … pick the sound that sounds like a foot getting eaten versus a head getting eaten. I love my job!”