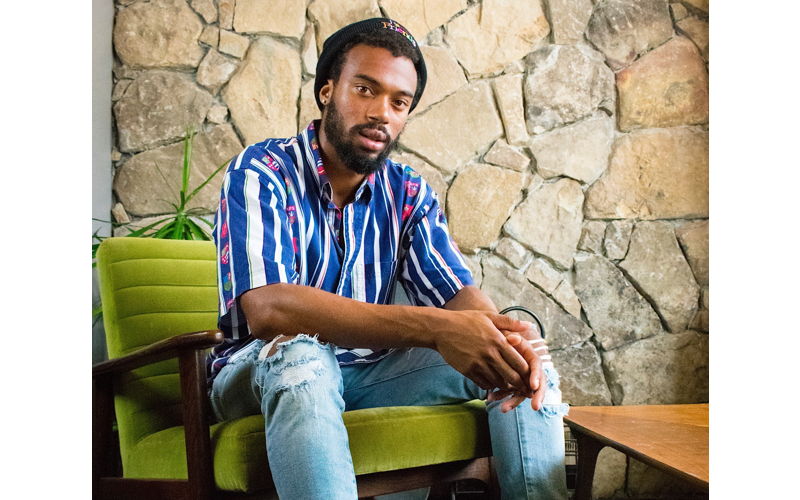 The Fall and Rise of Khallil Stewart

Khallil Stewart has loved two things all of his life: Soccer and making music. One has been a source of comfort for him during some very tough times. The other is largely the cause of those hard times.

Stewart’s talent was never an issue, whether it was music or soccer.

Working with programs like GarageBand and playing keyboards, he learned how to build tracks from the ground up on his own, and his stylistic range is broad, running from haunting, hushed soul-pop ballads to nimble rap tracks to ambient soundscapes.

As for soccer, when he was just 17 years old, the Lawrenceville, Ga. native played for the U-17 World Cup qualifying team in Panama. In the spring of 2015, shortly after he transferred from George Washington University in D.C. to the College of Charleston, he played for the Jamaican National Team, which became one of the qualifiers for the U-20 (Under 20) World Cup.

In the past two years however, Stewart has torn his ACL in both knees, two times apiece. For good measure, he also tore his meniscus. Those horrific injuries came in quick succession, followed by some of the worst luck one can imagine for a gifted athlete.

“The coaches [at CofC] offered me a chance to come back for a fifth year with a full ride,” says Stewart. “I said no at first, but they kept pushing me to do it because they knew it was my passion.”

By that point in 2018, Stewart had tentatively begun a music career, putting some of his self-produced electronic soul-pop and hip-hop up on Spotify and other platforms. He also put up some images of himself to accompany the music, which frustratingly proved to be a mistake in terms of his soccer career.

Stewart also set up a trial with the Charleston Battery, and then that fell through, leaving him with seemingly little hope. At that point, the music he was making went from a hobby to a form of therapy.

“The only things that got me through it were the girl I was seeing and my music,” he says. “That let me open up and deal with the emotions I was going through. A lot of people think it’s just physical, but it’s a lot to deal with mentally. I was really messed up, and music was the best help I could get.”

Stewart considered moving back to Georgia, but he looked past his disappointments.

“I decided to stick it out in Charleston,” he says. “It’s been hellish, soccer-wise, but otherwise, it’s been one of the best times that I’ve had, just being here by the water in this beautiful city.”

Stewart decided to dive head-on into music with the same determination he used to rehab from his injuries, and he’s released some impressive material since late last year.

First up was Winter Solstice, a collaboration with fellow CofC alum and member of Cry Baby, Jamie Gray.

Stewart also released a solo single, a half-sung, half-rapped ballad with skittering electronic beats called “Take’em,” followed by “Bonita,” a mix of Latin pop and hip-hop. By the time his single, “Flask,” came out in February, Stewart had begun to form an ambitious game-plan and an impressive list of collaborators.

In addition to his work with Gray, he’s got projects in the works with singer/guitarist Presley Randall from the garage-rock band Baby Yaga, soul-pop singer-songwriter Kingsley Priester, and more. Working with others and on his own, Stewart has a daunting strategy for the remainder of 2019.

“I’m going to push this music as hard as I can for the last five months of the year,” he says. “I’m going to give it all I have. I’m going to try to drop a song every week for the next 21 weeks. I recorded them, produced them and mixed them myself, because I have to believe in myself and put effort into myself before someone else puts the effort into me.”

The first two singles in this series, “Need You” and “Hell In My Brain” are already out, and Stewart seems ready to push past the skeptics and make his music career happen on his own terms.

“People told me it might be too much,” he says, “but I never give up. I never quit.”

And if he ever ends up playing soccer again, Stewart says he will simply give both sports and music everything he has, and let the effort be his legacy.

“I plan to start training again soon with one of my old teammates,” he says. “I’m going to keep doing both of them and let the chips fall where they may. I’m not expecting anything, but I’m going to prepare and plan and see where that takes me.”