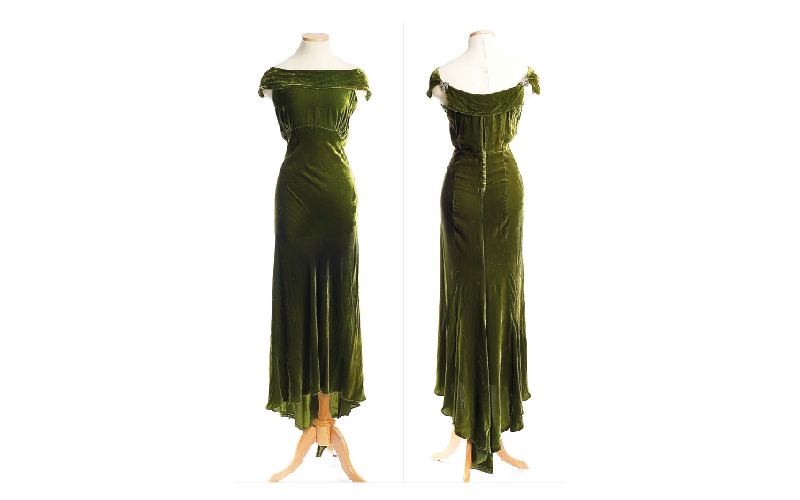 Vogue can’t take all of the credit for determining America’s wardrobe over the decades. The ebb and flow of fashion trends can be chalked up to much more powerful influences: war, economics, and revolution. Like all art, fashion is inevitably shaped by society and politics, and few events so drastically effect change as war. Teresa Teixeira, Charleston Museum’s curator of historic textiles, has studied the historical influence of politics on fashion and assembled War on Fashion, an exhibition available for viewing starting May 24 and on display until December 1. War on Fashion juxtaposes various style trends from periods following the Age of Revolution, World War I, and World War II, and discusses how each outfit is representative of the political and socio-economic views of the time.

“It’ll be set up like a blown up fashion design notebook,” says Teixeira. “Each of the outfits will be centered in front of two large pages with details explaining why they look like they do.” The design sketches, with arrows pointing to hips and hemlines, draw attention to the changing details from one era to the next. For example, one sketch compares the amorphous styles of post-WWI era to the curve-highlighting styles that emerged after WWII. The economic chaos of The Great Depression following WWI meant Americans’ pockets were tight, so fashion trends tended to revere slinky fabrics that highlighted a thinner frame. “Because of the state of the economy, women were forced to start working for the first time, and they also got the right to vote. They were coming out of traditionally feminine roles, so in the 1920s you see more masculine clothes becoming popular for women,” explains Teixeira. “Then the economy went bonkers after WWII. Instead of having to work like they were during the war, women were now being pushed back into the home. Dress became much more traditionally feminine and showed off curves.”

But according to Teixeira, the most striking differences in fashion trends were exhibited in the mid-1800s following the Age of Revolution, several decades before the start of WWI. America, France, Haiti, Ireland, and many other societies were undergoing simultaneous revolution. “The entire structure of countries and political thought changed and with it so did clothes,” says Teixeira. “Instead of the most expensive fabrics being the most fashionable, cotton came into style which was considered very democratic because more people could afford it.” The telltale hoop skirts, laces, and frills of structured, aristocratic courtwear faded away. “Society began imitating the styles that were seen on Grecian pottery. This was especially true in America with the Federalist style. People started dressing like they were Romans.”

Each outfit displayed was once worn by one of Charleston’s elite. Why the elite? Teixeira’s notes speak to fashion trends across all classes, but for the most part, only the high end threads were able to be preserved over the years. “The representative examples we have are from the upper class,” says Teixeira. “That’s what you’ll find in most museums because people tend to save and pass down their prettiest and most expensive things. Other fabrics tend to get worn out with time.”

And even these high quality garments that have survived the generations require meticulous care to preserve them for years to come. They can only be exhibited under the light of five foot-candles, and that’s not a reference to a candle of a certain size. A foot-candle is a unit of measurement for the amount of light it takes to illuminate one square foot of space. Adding to the vampiric lighting requirements, the clothes are able to be displayed for no more than six months before they must return to storage to rest in complete darkness for at least twice the amount of time that they were displayed.

Thanks to trade, Charleston was able to keep up with our fashionable friends across the pond. “Charleston was a really metropolitan area that had a lot more access to the wider world than most of America because of being a port city and by being one of the richest cities in the nation at the beginning of our history,” says Teixeira. “Our fashions were able to change alongside global fashion. By studying Charleston, you get a really good overview of the cutting edge of the times.”

The Charleston Museum’s War on Fashion opens on May 24 and will be on display in the textile gallery through Dec. 1. Learn more online at charlestonmuseum.org.

Critics’ Picks: The best visual art exhibitions going on around town during Spoleto