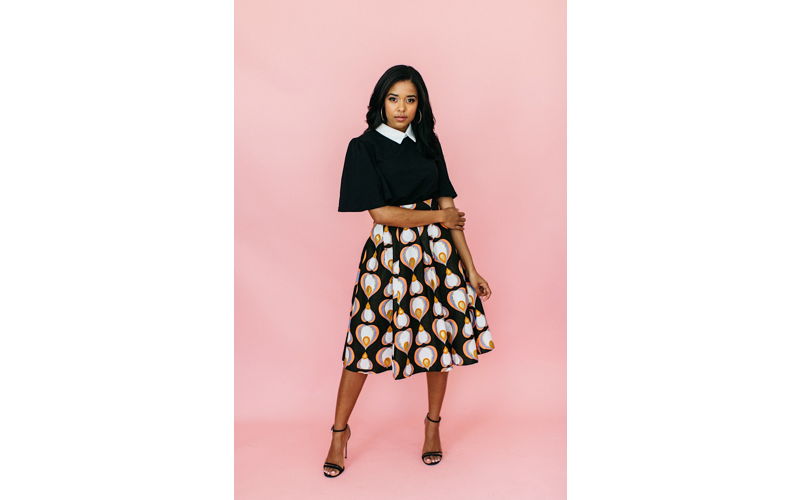 For its 13th year, Charleston Fashion Week (CFW) is introducing a new format. Rather than have a set week dedicated to showcasing emerging designers and modeling talent, CFW will be presented as “The Events, 2019” with three signature programs running in March, June, and September.

The first event, the opening party held on March 22 at The Cedar Room, will feature fashion exhibits, live entertainment, pop-up shops, and interactive experiences. Tickets to the event are $35 and $20 for the afterparty.

City Paper recently spoke with representatives from the three designers — Francis + Benedict, Hunter Bell NYC, and Opera Recycles — that will present their latest collections during the opening party.

Four years ago, after returning home from a church trip to Togo, a small West African nation, Katie Walters had an idea that initially seemed far-fetched: a clothing line with a humanitarian and philanthropic mission.

In 2015, she launched Francis + Benedict, a Charleston-based nonprofit organization that employs Togolese seamstresses to craft mini, midi, and maxi skirts that fuse American style with traditional African wax print textiles. It is named in honor of Francis and Benedict Avoyi, two missionaries living in Togo who Walters says are “the key to this whole business” and “the in-country directors.”

In addition to paying the organization’s seamstresses a fair and livable wage, profits from the sale of Francis + Benedict skirts are reinvested into the Togolese community to support health care, nutrition, and housing programs that benefit both the seamstresses and vulnerable local children.

“All the seamstresses are either widows, single moms, or the sole provider for their entire family,” Walters says. “It’s more than just a job to these women. They are provided for like family, and now they have goals we are all working to achieve together.”

Walters describes the aesthetic of Francis + Benedict skirts as “elegant and edgy with a confident, world-changing vibe.”

“The wax-print patterns speak to certain women, and they can be styled in so many ways,” she says. “They really do cross all stylistic categories.”

With her creative team, Walters determines each collection theme and its main colors, and all fabric is purchased from local wax-print fabric sellers in Togo.

“Once we purchase the fabric, we look through the material and decide which length of skirts to be made,” says Lynn Pugliese, designer and international director of quality control. “We take a photo of the material, and we set up an inventory sheet that will let the seamstresses know how many of each size, color of thread, and zipper. Once the collection is shipped back, each skirt is quality checked by our team, tagged, and steamed ready for shipment.”

Francis + Benedict typically launches four collections each year in March, May, August, and November. This year, they’ll launch a special collection of miniskirts in July. They’ll also exhibit a new couture line, called the Flourish Collection, at the Charleston Fashion Week opening party. The pieces include a ball gown made from African Vlisco fabric and a straight-line pencil skirt made from wax print, Pugliese says.

Walters hopes that the presence of Francis + Benedict at Charleston Fashion Week will create greater visibility as the organization works to become a label “that is known around the world.”

“Charleston Fashion Week is such an important part of our journey, and we are so thrilled to share our story on this incredible platform,” she says.

Hunter Bell describes her clothing line as “sophisticated, feminine clothing for the individualist,” with many pieces featuring whimsical, striking details such as ruffles, bright colors, bold patterns, and sequins.

Bell, who majored in fashion design in college, launched her brand out of her New York City apartment after spending two and a half years working as a design assistant. In addition to its online presence, Hunter Bell NYC can be found at high-end department stores and boutiques nationwide — including Beckett Boutique on King Street, Bell notes.

While Hunter Bell NYC currently operates out of Houston, Texas, Bell herself was born and raised in nearby Florence, S.C. South Carolina holds a special place in her heart, she says, and the chance to showcase her work in her home state is a rare opportunity.

“Every time I get back to South Carolina, it’s typically for the holidays to see my family,” she says. “It’s never really to celebrate fashion. … Coming back and being able to celebrate my brand and my home state where I was born and raised is the most exciting thing to me.”

Attendees at the Charleston Fashion Week opening party will see Hunter Bell NYC’s Spring 2019 collection, which was inspired by Marfa, Texas, a small desert city in the western part of the state that, in recent years, has transformed into an arts hub.

“It’s just so awesome that you can find inspiration sort of within your own state. … Texas is a new life for me,” Bell says. “I didn’t grow up here, and the state is so big and so interesting to me. There are so many different parts and places and terrain in the state that you can draw from.”

Travel is a constant source of inspiration for Bell’s designs, and when she can’t physically visit new places, she turns to the aesthetic and styles of the latest hotels to find that creative spark.

“Right now, we’re focused on designing holiday, and I’m calling it Christmas at the Carlyle,” she says, referring to the five-star Carlyle Hotel in New York. “[It is] very festive during the holiday season. … So what do I see in my wardrobe during that trip in December? It’s typically a feeling, but mostly inspiration comes from travel.”

“Opera is kind of a wasteful industry,” says Megan Miller, director of marketing for Opera Carolina in Charlotte. “We go through thousands and thousands of collateral pieces every year.”

But through Opera Recycles, those old playbills, brochures, and programs are getting a second life.

Launched in 2015, the initiative has repurposed more than 36,000 paper marketing materials, transforming them into elaborate dresses that have been presented on the runways of New York Fashion Week and Paris Fashion Week. Charleston Fashion Week’s opening party will be the U.S. debut of a collection recently shown at the latter event.

Opera Recycles is not only a way to creatively address an environmental problem but also a unique vehicle to promote interest in Opera Carolina, Miller says.

“I wanted to find a way that we could kind of upcycle and reuse some of these pieces also as a way of getting opera out into the community,” she says. “We try to kind of create and make opera accessible to everyone. So obviously creating opera gowns out of expensive fabrics wasn’t really going to promote the message of accessibility, and we want everyone to come to the opera. So what better way to market art than through art?”

Opera Recycles typically launches between three to six dresses for each year’s collection, and there is always a new dress unveiled for each of the company’s three grand operas performed in a season. As the initiative has grown, the designers have been given more creative freedom.

“In the beginning, I used to assign operas to the designers, but now I actually let them pick the operas themselves,” Miller says. “Each of the gowns are inspired by an opera, so the designers do research into the costumes, into the time period. There’s a lot of reflection.”

For Miller, participating in Charleston Fashion Week serves a dual purpose: to demonstrate an organization’s innovative approach to reducing their carbon footprint while also encouraging attendees to give opera a shot.

“We really want that environmental consciousness to come out of it, where people are like, ‘Hey, this is really something that we can bring,’ as well as we want people to look at opera through the eyes of these dresses and consider going and attending an opera after the fashion show,” she says.