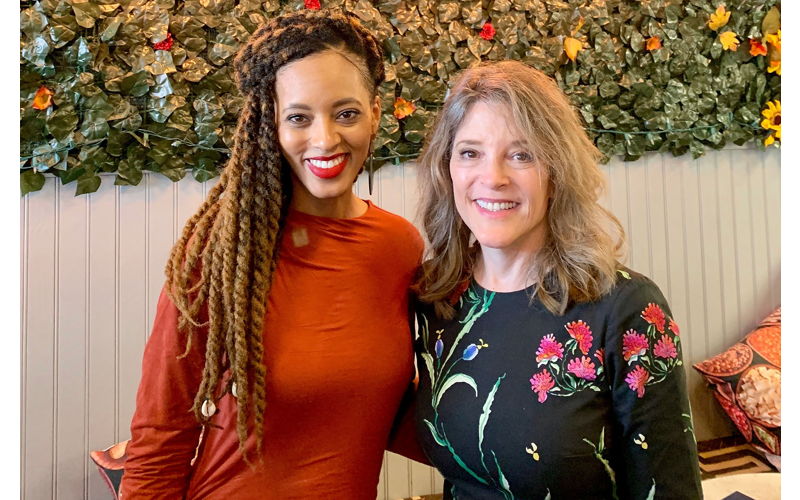 Dellz on the Macon was busier than usual in the late morning of July 8. By around 11:30 a.m., the North Charleston restaurant had attracted a mass of approximately 40 people. At the center of the crowd was presidential hopeful Marianne Williamson and Smarel Nicole Brown, speaking on Brown’s new podcast Raw Table Talks.

During her extensive conversation with Brown and other community leaders at Dellz, Williamson discussed reparations for slavery, joked about the Twitter backlash to her time on the Democratic debate stage, and gave a rundown of her entire economic plan.

Williamson’s stop at Dellz is just one of the recent appearances by presidential candidates rushing to the Palmetto State to make their case to early primary voters.

Over a year before the 2020 presidential election, Democratic candidates are making a push to put down roots in South Carolina. According to a Post and Courier database of candidate appearances, presidential hopefuls have stopped in South Carolina 302 times since April 2018. Approximately 50 of those have been visits to the Lowcountry.

The discussion between Williamson and Brown, a local entrepreneur and owner of Dellz on the Macon, became the inaugural episode in Brown’s new series.

“I know the statistics of the power of the black female vote,” Brown told the Charleston City Paper. “So as a black woman, and as a black leader, in my community, I just wanted to have a conversation, especially with someone who is discussing reparations.”

Brown states that she has not endorsed any candidate at this point, but believes that this is an important time in the local community to be “more hands-on politically.”

“We all see what’s going on nationwide, but we also see what’s going on in Charleston,” says Brown. “Things are changing fast and unless those of us that have voices — unless we actually get up and do something instead of complaining on social media, nothing else is going to change.”

U.S. Sen. Cory Booker of New Jersey, also a Democratic candidate, made a stop at Dellz Uptown on Rutledge Avenue for a June 15 meet-and-greet. Brown says Booker’s appearance was not an example of the restaurant “hosting” a candidate.

“It was just supposed to be him coming to eat with a few people, and the media picked that up and made that into what that was,” she explains. So far, Brown says Williamson’s podcast appearance is the the only event officially hosted by the restaurant to date.

For old-school retail politicking, restaurants are one of the archetypal places to stump or meet members of the community.

In the case of Rodney Scott’s BBQ, U.S. Sen. Kamala Harris making a visit in February was more happenstance than political savvy.

And don’t look for Rodney Scott’s to be making any endorsements, according to Cliffe. “If they choose to come here, that’s of their own volition,” Cliffe adds. “We respect them for being here, whatever their views are. We just want to feed them some good barbecue.”

“Primarily, as a senator for District 42, [I’m] using my platform to engage people in an opportunity to make an informed decision by asking questions and having those questions answered by the presidential contenders,” says Kimpson.

O’Rourke’s town hall was hosted at Burke High School on March 23 and Biden’s was held at ILA Hall on July 7.

Kimpson sees his chance to host a presidential candidate as an opportunity for them to learn about the lesser-known areas of his home state.

“I’ve found there’s a disconnect between what people in the national media are talking about and the concerns that many people in my district and the state of South Carolina have,” Kimpson says. “This is a way for the candidates to find out what’s important to us.”

According to Kimpson, South Carolina’s place as the fourth Democratic contest makes it a valuable bellwether to predict the outcome of the Democratic nomination in 2020. “Because of our positioning, being the first in the South and the first diverse state in terms of ethnic diversity, we have to take this responsibility very seriously,” Kimpson says. “Whomever wins South Carolina will be put on a trajectory to win the nomination. I think engagement is probably the most critical part of that process.”

Brown agrees on the value of South Carolina’s place on the Democratic primary calendar.

“I think that we understand that South Carolina is a major deal when it comes to the direction of the vote,” she says. “It just gives people in South Carolina an opportunity to know what’s going on. A lot of people that I know are not really interested in hearing of anybody, but when they come into our community, a lot of people are now starting to do more research.”

As a community leader, Brown also feels a similar drive to immerse herself in the electoral process.

“It’s time for us to show how significant being involved politically [is],” she states. “The decisions that I make right now as a mother, as a woman, as an entrepreneur will not just affect me, but will affect my sister, who’s 19-years-old, it affects my son, who’s four, it affects my niece, who’s 12 … It’s not just about us anymore; it’s about the generation behind us.”