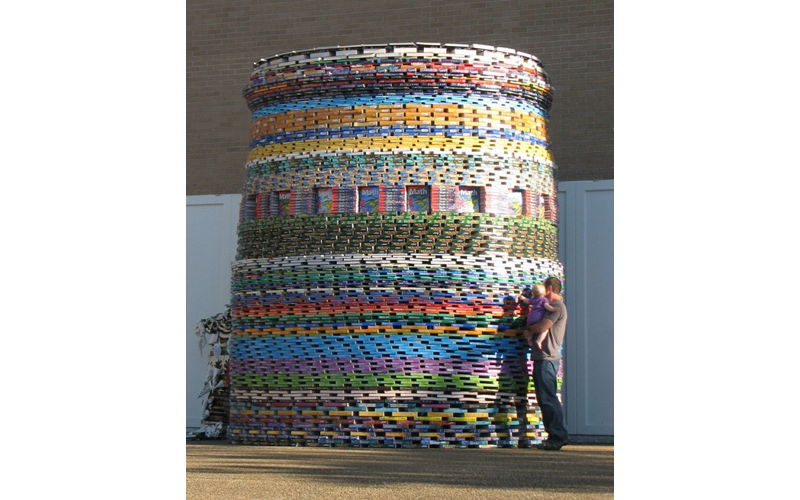 What may be the biggest exhibition ever by Charleston artists starts this weekend. It’s not in the Holy City, though — it’s in Lake City, about 100 miles away.

Nearly 100 artists from Charleston are taking part in ArtFields, a huge art show and competition in the Pee Dee city of 6,500. Charlestonians make up nearly a quarter of the 400 artists from 11 Southeastern states accepted into the exhibition.

What attracted so many artists to a little place that’s not close to much of anything and is best known for tobacco and beans? How about a top award of $50,000 and two more for $25,000 each?

The big turnout by Charleston artists can be attributed to a few things. First, the city has a large and active arts community that’s good at sharing information.

“I don’t think other places have the kind of community support artists have here,” says Erik Johnson, who did a collaborative piece with Hirona Matsuda for the exhibition. “There is such a concentration of galleries here, unlike any other areas. There are more artists trying to make a go of it.”

The cash prizes are obviously a big draw for the artists, as is the exposure. ArtFields organizers aim to attract 35,000 visitors.

“When I read those numbers I thought it was unreal that three people are really going to win that much,” says painter Austin Grace Smith.

The exhibition has many fairly traditional works — lots of landscapes and figurative paintings — but some artists are using the show as a way to push in new directions.

“We encouraged people to submit work that they might not normally get to exhibit,” Nathanson says. “I was surprised by the large-scale and installation work.”

Smith, for example, is showing the largest painting she has ever done — 8 by 4 feet. Matsuda and Johnson’s piece is a mix of still-life painting and actual still-life. Karl Beckwith Smith is building a structure out of 15,000 books.

Those who go to ArtFields will see Lake City as well as the art. While about 90 artists are showing in a former warehouse, much of the art will be exhibited around nearly 40 places.

When ArtFields was announced, many people were skeptical. Some thought the organizers had made a typographic error — added on too many zeros — to the award amounts.

“When I first heard about it, I didn’t know if it was legitimate,” Johnson says.

Others questioned how a small, isolated town could take on such a huge project.

Fears were laid to rest when they learned that a major backer is Darla Moore, a Lake City native who is a partner in the Rainwater Inc. investment firm and who was named one of Fortune Magazine‘s Top 50 Most Powerful Women in American Business. One of the aims of ArtFields is to help revitalize Lake City.

One of the $25,000 winners will be selected by a jury, another will be picked through visitor votes, and the $50,000 prize winner will be selected from a top jury selection and top vote getter. For many artists — especially those who are trying to make a living as full-time artist — any of the awards could be life changing.

“With a prize of that caliber, you could quit your job and devote yourself to making art,” says photographer Donna Hurt.

But the exposure, especially having her work seen by curators from throughout the region, is one of the major benefits, something the other artists concur with.

“Exposing my art to a bunch of people who don’t know it will be awesome,” Smith says.

One artist who wasn’t completely surprised by ArtFields is Karen Ann Myers.

“The concept is based on the Art Prize in Grand Rapids (Michigan) and that’s my hometown,” she says. “That one is all over the city in non-traditional places and has a big award. I’m beyond thrilled that it’s happening. It’s the first huge showcase of contemporary artists in the Southeast.”