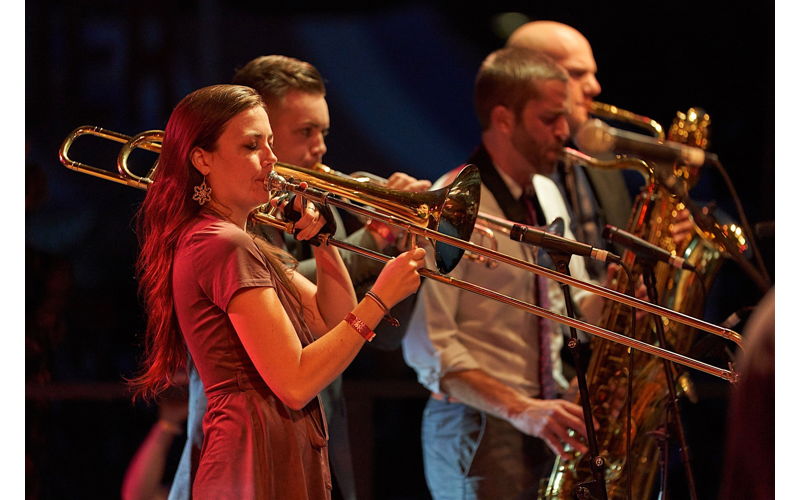 After 10 years of helping to organize the North Charleston Arts Fest, Ann Simmons, deputy director of the town’s Cultural Arts Department, understands the kind of dedication needed to maintain the event.

“One year we had [a staff member] out with a baby. One person’s mother passed away, and another person was hospitalized,” Simmons remembers. “And we still had to produce a festival. And it happened. At the time it didn’t feel like it was going to happen. This year we actually had a full staff.”

For the City of North Charleston Cultural Arts Department, the upcoming 36th annual event demonstrates that gall to pull together a quality arts event for their area. It takes about six months of work to bring together the North Charleston Arts Fest each year, and this year they’ve added to and altered the expansive happening to enhance the experience of attendees and to bring in more diversity of art and artists.

“The whole point of the festival is access to the arts,” Simmons says. “We’re really trying to expose, engage, and inspire with the festival. It’s largely a community driven thing.”

One festival change began last year and carried over — and it’s one of the more obvious alterations. The festival is now five days instead of nine, as it was in prior years. As Simmons explains, with such an inclusive and sprawling festival, having fewer days allowed the fest to consolidate events that were competing with each other to make a better, more comprehensive event. So where they had two similar affairs in years past with an outdoors art walk and a street dance, those have now been pulled together for the Arty Block Party. And, logistically, people can visit a five day festival more easily than a nine day one.

Over this quintet of days fest-goers can see outdoor sculpture, hand crafts, fine art, and photography. More genre-specific displays are on hand, too, such as the African American Fiber Art Exhibition, a youth art competition, and a host of unique events such as Hip-Hop Coloring. A more pronounced international set of art comes to the festival through the work of 11 Honduran artists.

“We always make a point of highlighting cultural groups of our area,” Simmons says. “We do have that kind of international flare every year but in terms of inviting actual international artists, that’s something we’re happy to do this year.”

Camela Guevara is North Charleston’s Artist-in-Residence and one of the artists participating in the festival. Her exhibit titled CREST presents new gouache paintings and sculptural fiber art pieces exploring aeronautics in relation to class. For Guevara, the North Charleston art fest’s breadth and diversity makes it distinct among art fests.

“Every art form is included and so many of the events are free. I love the cultural dance performances and all the craft vendors at the main event,” she says. “It really showcases the immense talent here in North Charleston through the Juried Shows, Palmetto Hands, the Travelling Fine Craft Show, Youth Art Exhibition, and so many music, dance, and theater performances. The festival also brings amazing performers and artists here for everyone to experience.”

A new layout is coming to the festival’s flagship event, the Arts Fest Expo. At this exposentation a variety of arts are on hand, from music to live visual arts to youth entertainment to cultural heritage arts. The enhanced flow of the event will allow people to concentrate on what they want to see. If you want to see fine arts, you’ll be able to do that in Hall A — but if works for kids is what you want, that will all be in Hall B.

The festival also features a notable music contingent with concerts by Americana singer/songwriter Angela Easterling, Lowcountry jazz saxophonist Abe White, and a slew of others. New this go-round is a collaboration with North Charleston’s The Bend to bring back the venue’s Marsh Jam concert series as part of the arts festival. Marsh Jam features food trucks, a beer garden, a roaming magician, and kid-friendly activities.

These additions and changes are all to give greater access to arts for people of North Charleston while also allowing the town to be a destination for tourists as well as artists.

“Geographically speaking, North Charleston is spread out. We always make a point to book events all over the city so that location isn’t a barrier. We’re trying to eliminate transportation and economic barriers to people trying to access these programs,” says Simmons.

Something that Simmons heard the other day about the North Charleston Arts Festival lets her know that they might be onto something with this ‘breaking down barriers to arts’ stuff.

“What I liked hearing about what they thought about our festival, [they said], ‘It’s a come as you are’ sort of festival,” Simmons says. “That to me says a lot about access. You don’t have to get dressed up to come. You don’t have to be familiar with the bands or the art forms to come.”