Catch up with your departed loved ones during Theresa Caputo Live! 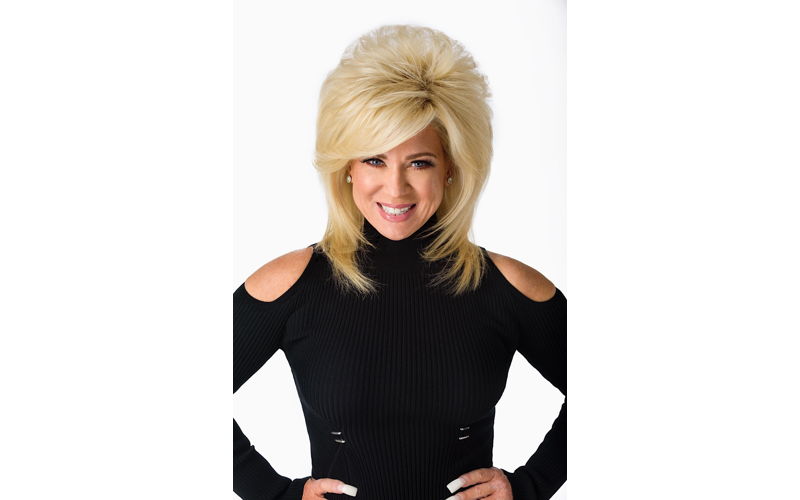 She’s the Long Island girl with the big blonde bouffant who claims to channel the deceased. She’s the star of the hit TLC show, Long Island Medium. She’s the one, the only Theresa Caputo, and this Friday, she’s bringing her talents to the Gaillard Center for an experience that’s sure to be out of this world. Caputo’s touring around the country delivering “healing messages” from the beyond to hopeful attendees. She doesn’t distribute readings at her own discretion, so not every attendee is so lucky to hear from the deceased. The readings come to her via “Spirit,” the all-encompassing term she assigns to the various energies and movements that she says she encounters.

“I don’t know who I’m going to read until that exact moment,” explains Caputo. “So what happens is I come out on the stage, I give a little quick speech on how Spirit communicates, examples of messages, and then Spirit will start to guide me around that stage. I really don’t know who’s going to get read or what Spirit will have me say or do.”

But you can at least count on Spirit to remain positive, says Caputo. The deceased aren’t interested in perpetuating negativity. Why would they be? They’re on the other side. Caputo says that the work she does is intended to bring peace to those of us left behind in the physical world.

“No matter who we lose or how they died, we’re left with these negative emotions and all of these burdens that do not give us the ability to heal,” says Caputo. “That’s why messages are what we need to hear, not what we want. What we need to make tomorrow a little bit easier, and that’s the thing that I love about Spirit is that there are common healing messages that people need to hear.”

So even if you aren’t one of the audience members whose loved ones make an appearance, you will surely find meaning in the messages of other audience members’ deceased loved ones.”People say it all the time after attending one of my live shows,” affirms Caputo. “They’ll say, ‘I did not know what to expect when I walked into the theater. I personally didn’t get read, but what I witnessed was absolutely life changing.'”

Caputo’s relationship with Spirit started early in life. When she was a young girl, she says, a disembodied woman would stand at the foot of her bed at night.”She would be there smiling and sometimes maybe say things to me,” recalls Caputo. “It wasn’t until I was late in my 20s or early 30s that I found out that was my great grandmother who died a couple of years before I was born. I just thought everyone was sensing what I was.”

Since she was raised Catholic, says Caputo, her family never acted as though her spiritual correspondence was unusual. “I come from a very strong faith and spiritual family, so no one ever made a big deal about the things I’d say or do,” she says. “It took me a long time to embrace my gift with my faith. And then once I learned how to do that, I struggled with who’s going to want to come and see a medium.”

These days, Caputo doesn’t give a flying phantom if you believe in her spectral abilities. She wants you to believe in your own extrasensory perception. “I want people to know that it’s not about belief in what I do. I don’t care if people believe in what I do,” says Caputo. “I want them to believe in themselves, that the things that they’re sensing and feeling and experiencing is their loved ones reaching out … that they have the ability to connect with the souls of their departed loved ones.”

You know how you might get a whiff of a familiar scent or randomly hear a song that reminds you of a deceased loved one? Yeah, not a coincidence says Caputo. The departed are with you always, lingering nearby, sending you small signals that they’re doing just fine. It’s easy to write these fleeting moments off as spooky coincidences, but they’re not, says Caputo. “That is Spirit,” she says. “That is your loved one letting you know that they are with you in that moment loving, guiding, and protecting you from the other side and letting you know that they’re there.”

So what does this spiritual communication feel or look like from Caputo’s perspective?

“What happens is when I start to sense and feel Spirit when I give my speech, they start to clear out my thoughts, feelings, and emotions, and I don’t have any of my own emotions. It then becomes the emotions of Spirit,” she says. Spirit will bring her quick glimpses into events that have passed, like a movie reel, perhaps, or a mind’s eye intuition. “I can’t explain it when I say that someone just said something to me,” she says. “It’s like I hear it but not in the way I hear things in the physical world. I can’t explain how I feel it. How I sense it. It’s just who I am. I don’t know any different.”

Weekend Roundup: 30+ things to do for the last summer weekend