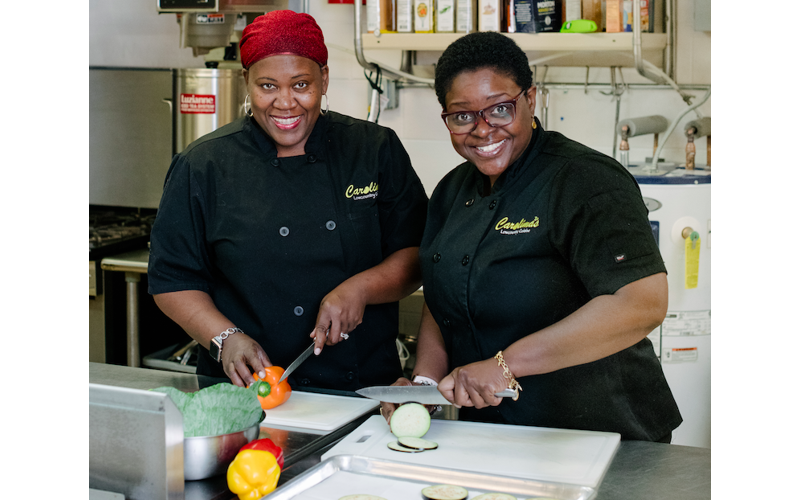 “By the end of the night our feet were burning, we couldn’t even stand up to take a shower,” laughs Carolima’s catering company founder and chef Sameka Jenkins. She and longtime friend and business partner Rethmiriam Barr, who serves as the creative director for Carolima’s, are reminiscing about their first catering job, which started, as all good things do, because of a college connection.

During her collegiate years, Jenkins was appointed in-house chef by her friends, “that was my contribution, my roommates really enjoyed it.” A couple of years later, a college friend asked Jenkins to cater a birthday party in Aiken. “At this time I had been cooking for five to 10 people — that’s nothing compared to cooking for 150.”

A Mt. Pleasant native, Jenkins doesn’t have a traditional food and bev background, except for the requisite coming-of-age stint at McDonald’s. But she knows how to cook, specifically the Gullah cuisine she ate growing up. “This is how my great grandmother made shrimp and grits and how my great grandmother made red rice,” says Jenkins. “You want to talk about smoked neck bone and what they now call pork belly, we were making that before it was popular — I know how to cook that.”

Barr works in education, and before launching Carolima’s catering full-time in 2011, Jenkins did “staffing and management and HR — you name it, I’ve done it.” When she was working at a bank that got bought out by a larger company, Jenkins decided it was officially time to ditch the corporate culture.

Carolima’s was born, and with it came a whole new set of challenges for Jenkins, including making the food she wanted to make without cutting any corners. “I have gotten into heated conversations with corporate clients who say this other company is a third of the cost [of us],” says Jenkins. “But they don’t have a chicken breader recipe they created themselves, we have our fish breader recipe, we grate our own cheese, we still mix things by hand.”

As diners hop from fad to fad — micro this and keto that — Barr says that Jenkins never wavers, never kowtows to off-brand requests. “People become fascinated with the ‘fancy’,” says Barr. “Sameka always does simple but good tasting food. People have more of an appreciation for how things work, [to complicate it] takes away from the whole meaning of Gullah food, southern food. It’s good food, simple ingredients, but quality ingredients.”

Barr says their most popular entree is the fried chicken, which is floured with a secret combo of ingredients. “Sameka and I came up with it together from simple tasting — she has to watch me on garlic, I watch her on salt so we balance each other out.” For desserts, clients always come back to the brown sugar Charleston Chewies — “it’s like a blondie with lots and lots of butter,” says Barr. “It will make your lips shine.”

Carolima’s works about three events a week, which may sound like small potatoes compared to some of the bigger companies in town, but for Barr and Jenkins, who work out of a shared kitchen at a local private school, they’re focused on “offering a personal touch and attention to detail.”

Barr and Jenkins say they cater pretty much year-round with their small team, noting that this past December was one of the busiest they’ve had. When they aren’t putting on full-fledged events, Jenkins says they’ll do a drop-off only service for those who are looking for quality food, but maybe can’t afford the full staff. And when they’re craving Gullah Geechee cuisine but are ready to kick up their feet, Jenkins and Barr say they’ll go to Hannibal’s, Bertha’s, or Nigel’s, even though “Nigel’s probably doesn’t call himself that.” Jenkins wishes, though, for a larger establishment, helmed perhaps by a nationally known African-American chef, one that isn’t closed on Sundays.

“You know, that dates back to slavery when Sunday was the only day the master gave slaves off,” says Jenkins. When Jenkins had her own restaurant (also named Carolima’s), a beast she says was even more complicated than serving 150 people on the fly at a birthday party in Aiken, she stayed open for a few hours on Sunday because “there was no other place for people to go and get fish and grits and salmon cake and grits.”

Until that salmon cake and grits Sunday destination exists, Jenkins and Barr will keep at it, making simply good Southern food for clients from here and afar. “Our destination brides love us, they challenge us,” says Jenkins. “Our collard green egg rolls were born out of a bride wanting a collard green bar at her wedding and I was like ‘how many ways can you make collard greens?'” “We hand roll them ourselves, we hand roll our buffalo chicken egg rolls. We clean the shrimp. And we love using local shrimp in season. We use whole milk, whole butter … It’s not imitation crab meat. It is what differentiates us from everyone else.”

Clients pay the big bucks for the real deal stick-to-your-bones menu Carolima’s promises, but Jenkins says her mother, who was born and raised Gullah Geechee, can’t fathom what all the fuss is about. “She says ‘I can’t people believe pay you that amount of money!’ For her it’s no big deal.”

It starts about a year out — first contact. There is inevitable compromising, conceding, and bargaining from the get, between the bride, groom, MILs, wedding planners, catering company. Everyone brings their ideas.