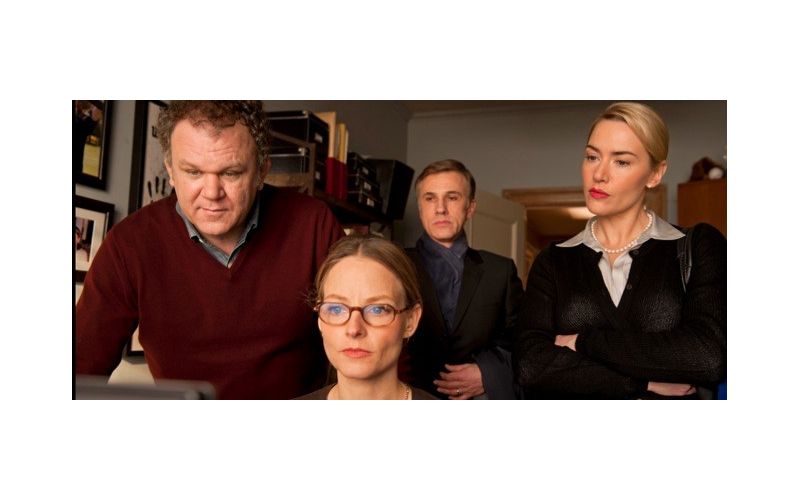 Fans of Melancholia‘s excruciating wedding scene will certainly find themselves at home in the bourgeoisie Brooklyn apartment of Carnage. Tweaked for the screen by Yasmina Reza from her award-winning play Le Dieu du Carnage (The Gods of Carnage), Roman Polanski’s film is the real-time encounter between two sets of parents — the bordering-on-mediocrity Penelope (Jodie Foster) and Michael (John C. Reilly) Longstreet and the obviously wealthier Nancy (Kate Winslet) and Alan (Christoph Waltz) Cowan — following a scuffle between their sons. What begins as passive-aggressive criticism of child-rearing skills becomes an all-out existential blow-up.

Penelope is the shrill catalyst for the 80 minutes the couples spend bickering in her living room. It begins with placing blame on which child is the monster: the physical victim, Ethan Longstreet, or the perpetrator, Zachary Cowan, who Ethan bullied and excluded from his “gang.” What could have been a quick settlement is twisted by each not-so-subtle jab Penelope makes at the Cowans and their son over her special apple-and-pear cobbler, as Michael stands by with buffoonish geniality.

The Cowans try to ready themselves to leave, only to take their coats off again and again in acts of resignation whenever a new argument arises. This couple is made up of the typical workaholic husband and neglected wife, Nancy’s eyes darting to the ground each time Alan rudely answers his cell phone. Waltz’s German demeanor plays well as a man who feels this meeting is beneath him and that, basically, “boys will be boys.” Nancy is so disgusted by her husband that she becomes physically ill, upchucking all over Penelope’s rare art books. It only gets worse from there, as the couples, previously aligned by wedding vows, begin to turn on each other.

Each character in Carnage is distinctively obnoxious, and there are many argumentative pairings (Alan vs. Penelope, Nancy vs. Michael, etc.) to keep the restricted action from becoming stagnant, along with a few subplots (Michael murdering his daughter’s hamster, Alan’s work for a dishonest pharmaceutical company). No one is sympathetic. The women are each uptight in their own way, their perfectly neat hairstyles unraveling as the minutes pass. Meanwhile, the men, who certainly don’t like each other, find an fiendish common ground in conspiring against their wives. As the afternoon passes, and the scotch is poured, Carnage becomes a kind of battle of the sexes, and Polanski’s camerawork becomes as drunk and unhinged as the actors themselves.

Carnage is well acted, written, and directed, and there are brief sparks of humor scattered throughout, but this is not necessarily an enjoyable film. The audience will wonder how anyone could put themselves through such an uncomfortable meeting. It’s why the most interesting parts of the film are the opening and closing credits, when we silently witness the encounters between Zachary and Ethan. They may be the adolescents in Carnage, but it’s their parents who act like children.