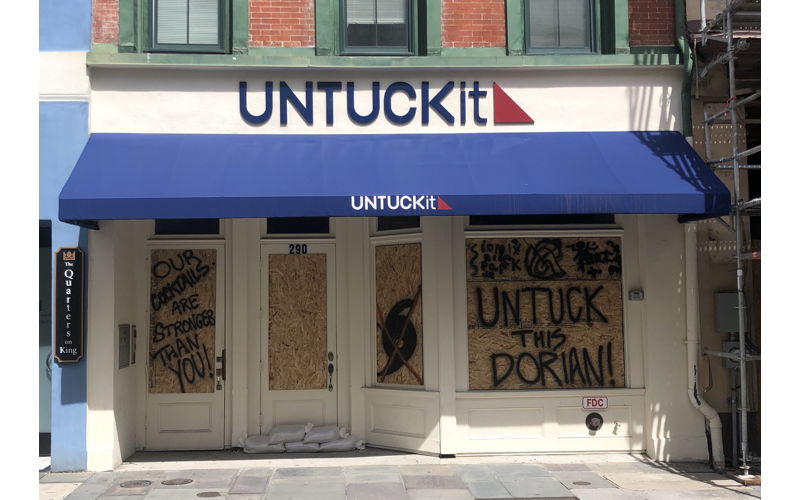 Scraping up the South Carolina coast as an invigorated Category 3 storm last week, Hurricane Dorian would soon bring torrential rains and power outages to the Charleston area, but local businesses and their employees would also bear the brunt of the storm.

“Based on the track of the storm and the experience we have had with prior storms, it led us to believe that it would be a good decision to stay in Charleston through the storm,” says Jeff Plotner, co-founder of Brackish Bow Ties. Plotner and his family did not evacuate, but Brackish did close up shop.

“Not to mention, owning a business in Charleston makes it harder to want to get out of town, because you want to make sure the infrastructure is still in place once it’s over,” he says.

Though Plotner felt safe enough to stay home through the wind and rain, his business was not unaffected.

“We have a women’s collection we have been working on for a couple years,” he said. “We were planning to release this week, and out of respect for everybody and for Charleston, we decided to push that back to next week.”

Luckily, his employees made it through the storm as well. Plotner chalks it up to their past experiences in Charleston but did not want to make light of the hurricane.

“As far as our team is concerned, everyone is really resilient,” he said. “We have had to go through this preparation process four times in the last few years. We know what to do, but that doesn’t make it much easier.”

Apart from losing time and money, Plotner had to work through his online orders. Brackish Bow Ties ships orders out of the area, and according to Plotner, finding transportation for delivery was a challenge.

Southern Charm Candle Co. is another local business that is still dealing with the aftermath of Dorian’s rampage across the coast. Owner Tom Cullipher said he was fortunate to have been in a lull in his orders at the time of the storm.

“I am pretty much a one-man show, and luckily, I did not have any current orders,” Cullipher said. “My largest account is Historic Charleston Foundation, and I would imagine they were impacted.”

Cullipher evacuated the city before Dorian arrived, and was still traveling back to the Lowcountry on Fri. Sept. 6.

Paired with the high tide, Dorian’s heavy rain and devastating storm surge caused heavy flooding in many parts of downtown Charleston, though the floodwaters were more isolated and less substantial than worst-case scenario forecasts.

Charleston may have dodged a worst-case scenario with Dorian, but with thousands of people still without power a full day after the storm, local power lines are hardly the most vulnerable aspect of the coastal economy.

As a tourism and leisure hub, Charleston is particularly susceptible to the effects of dramatic swings in fortune brought on by unpredictable severe weather.

The U.S. Department of Housing and Urban Development reported in 2017 that 13.5 percent of nonfarm payroll jobs in Charleston and North Charleston are in the Leisure and Hospitality industry, making it the fourth largest among the two cities.

“Since 2000, the sector has increased 52 percent, only surpassed by growth in the professional business services and the education and health services sectors,” HUD said in their report.

On a national level, the Bureau of Labor Statistics found that, in 2018, only 10.2 percent of nonfarm jobs in the U.S. are in the Leisure and Hospitality industry.

The importance of the industry to the Charleston area makes it a weak point when hurricanes are an immediate threat. The state Department of Parks, Recreation, and Tourism pegged the total economic impact of Hurricane Florence last year at $117 million, according to the Greenville News. Florence brought weaker winds and rains to Charleston than Dorian, but nonetheless, millions flowed out of the local economy as evacuees fled the coast.

The city will have to wait and see how much Hurricane Dorian cost the city’s service industry.

For hospitality industry employees, a week of no work can mean a week of no pay, which already can be meager compared to other fields.

Comparing the food service industry median hourly wages in Charleston County ($9.54) to the national average ($11.09), shows a clear gap, especially in a city known for its food.

Despite the lower-than-national wages, the cost to live in the tourism mecca has been measured to be on par with other areas. According to the Cost of Living Index, a scale created by the Council for Community and Economic Research, Charleston’s cost of living hovers around the average for the U.S.

On Fri. Sept. 6, Gov. Henry McMaster lifted Charleston’s evacuation orders. It was back to business as usual on Monday — missed paycheck or not.