Broad visions cast for the Upper Peninsula (a.k.a. NoMo, a.k.a. the Neck) 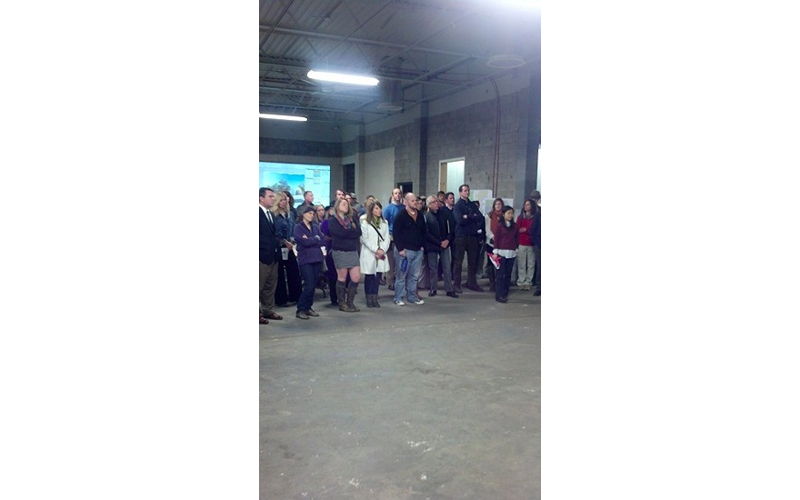 Bike paths, art projects, and the specter of gentrification

At a community input meeting about the future of the Upper Peninsula Thursday night, attendees started batting around big ideas for the corridor that connects the Charleston peninsula to North Charleston: bike paths, murals, mixed-use development, and community gardens, to name a few.

More than 100 people showed up to the meeting inside the GrowFood Carolina warehouse, which was hosted by the new nonprofit organization Enough Pie. The group’s mission statement is to “support creative placemaking” in the area by “funding creative programming, community development initiatives, and tactical urbanism projects.” The meeting was billed as a “Muster Plan,” a chance to “take stock of what we have and overlay that with community needs + desires,” according to the Enough Pie website.

The meeting had very little structure, with attendees encouraged to peruse photos of the area and write their ideas for the community’s future on Post-It notes and chalkboards around the room. Enough Pie board member and founder Kate Nevin gave a brief talk, telling the crowd, “We don’t have an agenda. We’re throwing it back out to the community.” Some attendees confessed they were confused as to what the meeting was about.

Attendees included architects, artists, musicians, and city employees. Chris Burgess, executive director of Enough Pie, has taught arts management at the College of Charleston for eight years, and he said that while his organization isn’t a development company, he plans to be involved as development comes to the neighborhood. “Hopefully we can have a voice for creative businesses and artists,” Burgess said. So far, Burgess says the organization has been funded by “angel donors” who wish to remain anonymous.

Enough Pie has taken to calling the area the Upper Peninsula, a corridor that follows roughly along Meeting Street Road and the King Street Extension from Thee Southern Belle at the northern end to Huger Street at the southern end. Other suggested names have included the Neck (the historical name for the northern section), Cool Blow, the Creative Corridor, and NoMo (the City Paper‘s favorite, named for the northern end of Morrison Drive).

Anthropologist Ade “Dr. O” Ofunniyin, the former owner of Studio PS on Conroy Street, said he grew up in the area and has been following the Enough Pie project since its beginning. “I try to stay involved, because one of the things that’s important to the project is diversity,” Ofunniyin said. “If you look around, there’s certainly diversity in the room, but there’s not diversity of race. And that’s not because people aren’t invited.” He said he likes the idea of artists painting murals in the area, especially if they are reflective of the community and its history.

“People feel like they haven’t been invited in the past, so you have to encourage people to get over it, that history of exclusion,” Ofunniyin said. “Gentrification is a real issue, but it’s going to happen whether you’re afraid or not. If you give up being afraid and become involved, then you can influence how it happens. You can be participating in it as it’s happening and be a part of the vision.”

Photographer Adam Chandler, who had been hired by Enough Pie to take a series of panoramic shots along the corridor, gave a brief presentation about what he saw in the area. “I think Meeting Street is really the perfect name for what’s kind of the backbone of the creative corridor,” Chandler said. “It’s a place where there will be a meeting of hearts and minds and a building of relationships.”

Jenny Horne, an associate principal at SGA Architecture, said she likes “the industrial feel this area has.” She said there would likely be some mixed-use development soon, with commercial and business and residential spaces existing side by side. “There’s certainly a hipper vibe, a younger vibe to it,” she said.

Collaborative space still in the works at 1600 Meeting