Bradford Lee Folk talks about farming, buying a bar, and the definition of bluegrass 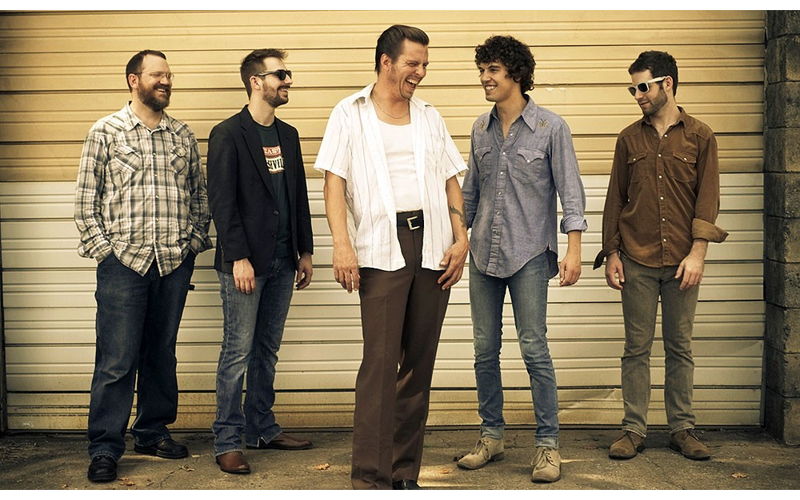 Bradford Lee Folk & the Bluegrass Playboys are a throwback band of sorts. Surrounded by musicians that would make any country music traditionalist proud, Folk’s vocals echo past legends: Hank Thompson, Merle Travis, and George Jones all standout as considerable influences in Folk’s songs. Even the name of the band would be right at home on a rural concert bill in the ’50s.

Folk believes in country music, and he believes in the traditional definition of it. He writes his songs with a fiddle and banjo in mind, and the music found on his latest album, Somewhere Far Away, reflects the impact that his upbringing in the central United States had on him.

“My parents split up early on when I was just a young boy,” Folk begins. “My mother was in a convent — she was a nun — and she moved up from Louisiana to Missouri. We had family up there that had farms, and as a young man I would go to their homes and help when I could, especially in the summer. Then when I left home after high school graduation, I began working on cattle ranches and dairy farms out in Colorado. I followed some girls out there — that’s how I ended up in Colorado. I didn’t grow up on a farm, but I’ve been doing it so long that it’s all I do when I’m not playing music.”

While many of today’s country stars sing about dirt roads and the beds of pickup trucks, they give off the funny feeling that the closest they’ve ever actually been to a tractor is watching their landscaper mow the front yard — not so with Folk. He keeps busy splitting time between a musical career and working the fields. Currently heading up a 400-acre operation outside of Nashville, the hard work that farming demands has, mentally, served Folk well, along with being an inspiration for his songs.

“The farming is just more steady,” Folk explains. “I’ve been lucky enough to be able to leave on time to do the music, but when I was in Open Road, my previous band, we got so busy there toward the end I had to quit any other job outside of music. I make more money playing music, but I don’t do it as often — it’s not that steady — so it’s a real blessing to have that when I get home. It really takes both of them to keep the bills paid.

“Working outside gives you time to think, decompress, and think about something else for a while,” he continues. “Too much of either just isn’t a good thing for me. With others it may be different, but I like the variety and hard work of it. With music, you sit in a van all day driving to a venue. You sit there until it’s time to play, and then you get back in the van after you’re done and go to a hotel room. There just isn’t much physical activity there.”

Open Road continues to touch every aspect of the singer’s career — it stands out as one of the great what-could-have-been’s in present-day bluegrass. Releasing three critically acclaimed albums on Rounder Records over the period of eight years, the Colorado band was finally beginning to make a push for mainstream recognition when Folk backed away from the band, leading to its breakup. After buying a bar in Colorado, the singer discovered life at home suited him better than a life of touring.

“I was just finishing up touring when I opened the bar, and then I realized how nice it was to just not be on the road that I just used the bar as a good escape,” he says.

Now Folk is on tour once more, playing music with the Bluegrass Playboys, and for many fans it feels as if he never left. While the traditions of the genre are definitely felt within the music, one listen to the band performing live announces that they are not tied to any century-old bluegrass rules. While numbers like “Trains Don’t Lie” showcase Folk’s masterful songwriting, and give the listener a look into the man’s life, the band is just as likely to knock out a couple of Springsteen covers during a concert.

Folk doesn’t have a handle on what country music means these days, or what the term ever meant, any better than anyone else. He admits that moving to Nashville has meant listening to more of the music flowing out of the city these days, and that has dropped his guard a bit.

“I feel like we all kind of gravitate toward certain artists throughout history. When I listen to music, I listen to a ton of early country artists, because to me that’s the cream of the crop,” says Folk. “Country music hasn’t gone in a direction that really makes me think that it’s gotten better. With that being said, I’ve really tried hard to open my mind, especially since I’ve moved to Nashville, but it’s hard. Living here now, there’s just so much good music happening that it’s impossible to keep your boundaries up, because you are exposed to something new all of the time.”

One thing that irks Folk a bit is his music with the Bluegrass Playboys being classified as Americana. The performer has no ill will toward the genre — he just believes that it should be clear that he is performing what can only be described as bluegrass music. While the unofficial definition of Americana has always popularly been “too country for rock, too rock for country,” Folk finds himself shunned by the bluegrass establishment, and he has no idea why.

“I just don’t understand it,” he says. “I did know when I put out my latest album that there are two camps of different people — one in Americana and one in bluegrass — and I knew it would be a stretch for both of them to appreciate what we’re doing. It was unusual that I didn’t get a whole lot of positive responses from the world of bluegrass, and I think there’s a lot of reason for that, and Americana seemed more interested in what I was doing.”

Folk adds, “Frankly, I don’t know what Americana even means.”