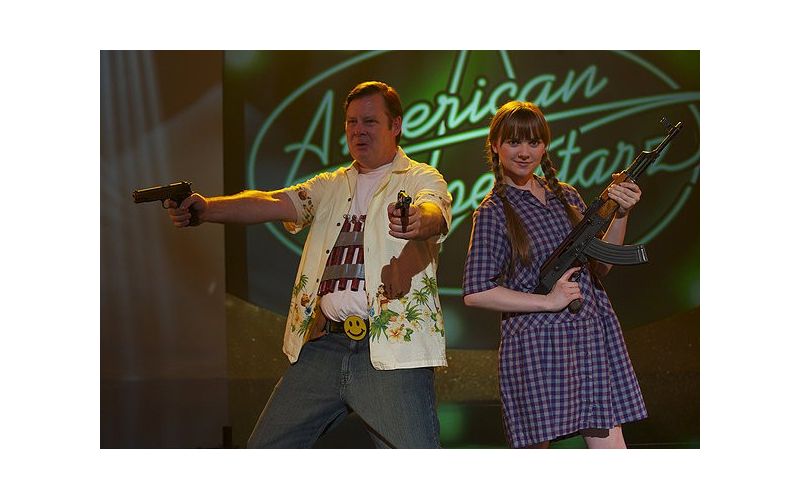 For a movie that starts off with a man fantasizing about killing his annoying neighbors and their baby, Bobcat Goldthwait’s God Bless America has a very hippie underbelly. When the film’s main character, Frank (Joel Murray), asks one of his potential victims “Why can’t you be nice?”, he’s not asking in a Samuel-L.-Jackson-quoting-Ezekial 25:17 way. He is genuinely saddened by the downward spiral society has taken. The separatist tone of the partisan 24 hour news cycle and the self absorption of those around him leave Frank wearied.

The moment God Bless America begins, you are immersed in Frank’s frustration. The invasive sound of his neighbors peppering their gossiping with words like “hater” and “retarded” while their baby wails continuously are like personal jabs at his tired psyche. On top of that, the television seems to be melting his mind; scenes of women beating the crap out of each other, ads for pigfart ringtones, a Glenn Beck clone (portrayed by Mystery Science Theater 3000 alum Frank Conniff) ripping into Obama, and the parasitic reporters of TMI making fun of an American Superstarz contestant seem to be the only options for his viewing pleasure.

The next morning, Frank is called a drama queen by his ex-wife and daughter and is berated by his neighbor before he even steps foot into work. Once there, the cacophony of his fellow employees engaging in water cooler talk about American Superstarz weighs him down even further. When his cubicle partner tries to goad him into a chat about the show, Frank launches into a subdued soliloquy about America’s pop culture effect on our values and our basic human interaction, while his fellow employee, impressed with his own self-perceived brilliance, questions Frank’s patriotism and political correctness. When his two-minute rant ends, Frank is greeted with a pink slip for an act of kindness misconstrued as sexual harassment. His day finishes with his doctor on a cellphone threatening to violently rip the cock off of his car dealer while casually advising Frank on his newfound brain tumor. Afterwards it’s back to letting the cathode ray shred his soul while his daughter bitches about not having a iPhone.

With the barrel of a gun jammed in his mouth, Frank comes to a decidedly warped epiphany: kill the toxic star of the My Super Sweet 16-esque show, Chloe. His eventual murder of the spoiled reality TV star catches the eye of an unhinged teen named Roxy (Tara Lynne Barr), and it is her presence that inspires Frank to go on a killing spree.

It’s difficult to review God Bless America without some context. I’ve longed to see a movie of its ilk, and I’m surprised it’s taken this long for a movie about folks going postal on our noisy, celebrity-obsessed culture to come out. Overall, I loved its violent take on society’s need for a kinder culture, but there are flaws within the film. It’s one problem is a big one: Somewhere around the 40-minute mark, the message is weakened by God Bless America‘s constant reiteration of how much this and that sucks. What started out as a broken man’s legitimate commentary on devolution almost borders into a hipster whining about the mainstream. This is the point where God Bless America threatened to lose me, and that’s a shame because the film’s message is an important one.

While Roxy is a fascinating character with an unquenchable bloodlust, a few of her scenes can go a long way. Barr’s performance is pretty awesome, but the exchanges between her and Murray are usually centered around America’s ills. The moments when Roxy’s dialogue doesn’t sound like a writer’s imagination and more like a confused, flawed human being are memorable, but unfortunately those scenes are minimal when compared to the countless diatribes about tea parties, popular music, and Diablo Cody.

Much like South Park, Bobcat Goldthwait’s film, like his previous ones, shines a harsh light on the tastelessness of reality with subversive art that essentially asks, “What’s more obscene? A fictional character dispatching vapid Kardashian/Trump imitations or the culture that lauds,praises and rewards the real article?” Despite the repetitive flaws, God Bless America is one of those movies that deserves a recommendation for the audacity of its pitch-black comedic take on the cannibalistic cult of celebrity.