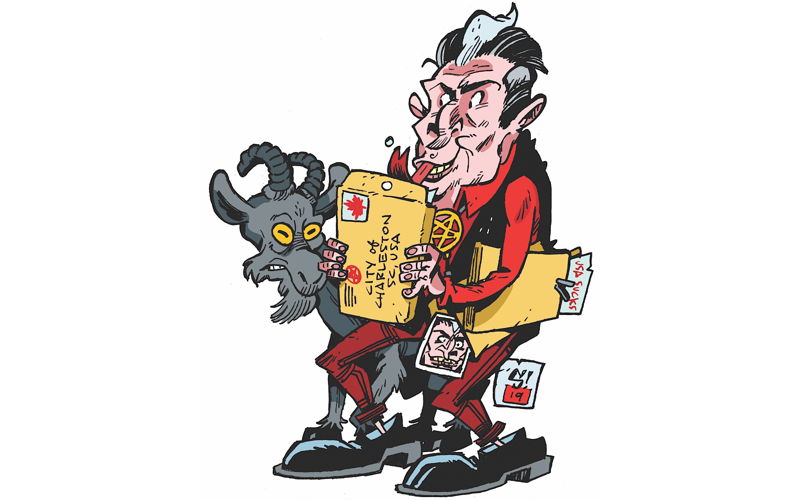 Blotter o’ the week: Letters from a Canadian man claiming to be “part of a satanic society” were received by the City of Charleston. Inside the envelopes was a poem that made “anti-American sentiments,” several bus and train tickets, and four pictures of an older white male. In typical Canadian fashion, this sounds strangely polite.

Two racquets were stolen from a West Ashley sporting goods store. The racqueteer made off with $45 worth of property.

For the second time this month, a juvenile used a taser on another juvenile. This time, it happened at a basketball court downtown. The owner of the taser told police that they were unaware it was missing.

An officer found a man urinating on the Calhoun monument. Don’t get excited, #Resistance members: it wasn’t a protest, he just couldn’t hold it any longer. The man was issued a homeless resource sheet and placed on trespass notice.

An unknown party broke a car’s rear window to steal a whopping $2 in change. The theft occurred in a student apartment parking lot, so that’s two less dollars for beer money.

After a party celebrating her divorce, a woman woke up in her vehicle, which had crashed into a dumpster off of Highway 61. The woman claims that an unknown party had offered to drive her home in her own vehicle. The driver could not be found.

In a local tech company’s parking lot, a black Ford Mustang was observed driving in circles for 45 minutes. According to the report, the driver began “doing burnouts” for two minutes, leaving a 50 yard diameter circle. The only crime here is someone being too cool.

A man entered a building with two “no trespassing” signs conspicuously placed and was charged with trespassing. These can’t all feature satanic Canadians, OK?

A flamboyant trespasser entered a young man’s apartment to leave a “fluorescent pink cowboy hat with a crown on it” on the pillow of his bed. They also left the victim’s water running, causing between $5,000 and $15,000 in damage to the store below.

Birth certificates and Social Security cards of a woman’s four children were stolen from her handbag in the backseat of her car.

A small bag of what is “presumed to be cocaine” was discovered at a playground on Daniel Island. Damn kids.

An intoxicated man downtown believed that he was in Ruffin, S.C., then Walterboro. He debated his location with the officer while being arrested by CPD.

In the missing-firearms department, at least three pistols and one shotgun were stolen from vehicles this week.