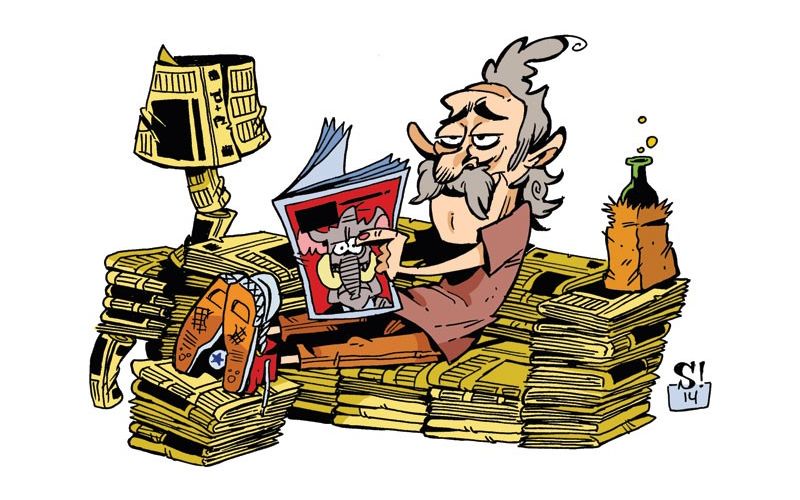 Blotter o’ the Week: Police found a man camping out behind a vacant house near The Post and Courier office with a massive collection of newspapers.

A police officer woke up a man who was passed out in the driver’s seat of a parked car with streaks of pink vomit on the side of the vehicle. When the officer woke up a woman who was passed out in the passenger seat, she started yelling, “This white girl ’bout to piss me off!” and then hit the officer in the leg with the door and shouted “The car’s not in move-tion!” The officer arrested her on a public disorderly conduct charge.

A man was seen urinating on the outside of a candy shop. You’re supposed to take the free samples, not give them, man.

A woman was attending a tent revival when she noticed that her cell phone was missing from her pocket.

All-Time Low o’ the Week: When an officer confronted a man who was stumbling down an alley leaning on the wall to stand up, the man said he had a designated driver, then he crouched near the ground. When the officer asked the man if he could get in contact with his friend, the man lay down on the ground and said, “Fuck it.” After the officer detained the man on a public disorderly conduct charge, he threw up on himself and could not (or maybe would not) sit upright in the back of a police cruiser, so the officer let him out of the vehicle to lie on the pavement until EMS arrived.

A woman says she was driving down the street when a man standing in the roadway sprayed a fire extinguisher into her open window, laughed, called her a bitch, and then ran off. When police caught up with the man, he said he had been lighting alcohol shots on fire and accidentally lit his finger. He told police that the woman’s car just happened to be in the way when he ran outside to spray his finger with the extinguisher.

Somebody stole a hedge trimmer and two weed eaters from the backseat of a car.

A woman walked up to her minivan and discovered that someone had scratched the paint on the side and made several drawings on the side panel with orange and green crayons.

Matter-of-Fact Response o’ the Week: When an officer pulled a car over and said that he could smell marijuana in the vehicle, the driver replied, “Yeah, I know, we were smoking a joint.”

A bicyclist is accused of committing a hit-and-run on a parked car.

Pointless Hulk-Out o’ the Week: Somebody broke into a house and ripped a bathroom sink off of the wall, causing damage to the piping.

Crack Stash o’ the Week: Police found 2.5 grams of crack cocaine after searching inside a slit in the waistband of a man’s boxer shorts.

While pumping gas into an unmarked police vehicle at night, an officer saw a car speed through a crowded parking lot with no headlights on and then peel out onto the road. The officer followed the car on a 70-mph chase that went through a construction site and a grocery store parking lot before the driver pulled over. The driver did not admit to doing anything wrong and questioned the officer on whether radar had been used to clock his speed.

A woman says she was about to get an MRI when a radiology technician told her to take off all her jewelry and put it in a locker. She did what she was told, putting her jewelry inside her purse in the locker. Later, while she was out shopping, she realized that a diamond ring was missing from the purse.

Scam o’ the Week: Someone on Craigslist convinced a man to ship his $1,000 wristwatch to New York City before receiving payment. The buyer assured him that he would be paid via PayPal, but the money never materialized. By the time the victim figured out he’d been duped, USPS told him it was too late to stop the shipment of the watch.

After receiving a delinquency notice from police in Washington, D.C. for a speeding violation she did not commit, a woman realized that someone was using her old license plate on their vehicle. She said she had surrendered her old license plate to a dealership when she bought a new vehicle four years ago.