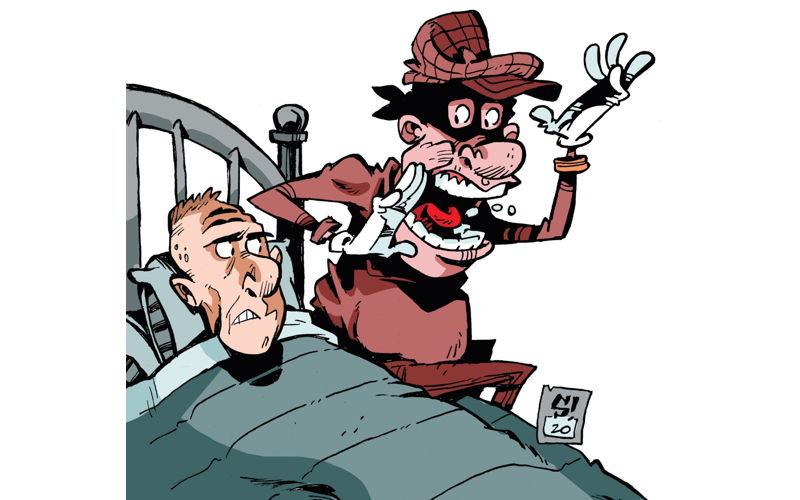 The Blotter is taken from reports filed with Charleston Police Department between Aug. 28 and Aug. 31. No one described in this section has been found guilty, just unlucky.

Blotter o’ the week: Apparently, the most effective method of checking if there is a burglar in your home is to lie in bed and wait for the burglar to sit next to you. The would-be thief reportedly exclaimed “Oh shit,” when he realized one resident was awake and ran out the back door. Burglars, like opossums and snakes, are more afraid of you than you are of them.

One man had two TVs stolen from his house by a temporary resident, along with his Ford F-150. Wonder how the thief made off with the two TVs?

A man called police on his cell phone and reported that he was “jumped” by five guys in a convenience store parking lot. Don’t worry, the victim said he fought them off, “subduing” two by holding one down against another and using only his legs to subdue another. The victim said the men took his wallet, keys and cell phone in the scuffle. Wait a second …

An officer noticed a “suspicious” vehicle in the back corner of a parking lot and went to check it out. As he approached, the driver jumped out, and quickly blurted, “I’m just trying to go to the bathroom.” No justice, no pee.

A parking meter on East Bay Street was damaged and approximately $50 was missing from it. According to police, the city had not replaced it by Aug. 31. So, free parking in that one spot on East Bay.

Nothing noteworthy was taken from a shoe store downtown after a break-in, according to a report. The owners believe the thief saw a container of fake $100 bills in the window, broke in, and upon realizing it was not real currency, left. Reached for comment, Wile E. Coyote recommended setting up a box and a stick to catch the counterfeit caper.

After telling an officer she hadn’t had any alcohol or drugs that night, one woman continued to carry on slurred conversations with non-existent people. We aren’t accusing her of lying to police, but something isn’t adding up here.

A convenience store clerk told police that the man who just walked out of the store with two cases of beer often comes in to steal things in the mornings when the store is busy. Seems like both parties know a lot about each other, yet the shoplifting continues?

A man was arrested in front of a downtown hotel for stealing 500 pennies from a motor vehicle. While being chased by the complainant, the suspect was noted to have jingling pockets with change weighing his pants down. Tip: Look for the paper currency if you’re making a run for it.

One man abruptly stopped his car and jumped out along Savannah Highway, forcing the woman behind him to also stop. He reportedly ran up to her passenger door, kicked it and returned to his vehicle and drove away. I feel like there’s some context we’re probably missing here.

The Blotter is taken from reports filed with Charleston Police Department between Sept. 11 and Sept. 14. No one described in this section has been found guilty, just unlucky. Blotter o’ the week: A modern-day love story: A young woman invites a boy over while her mother is away. The boy steals her PlayStation 4 […]