Blotter: Laser people get board 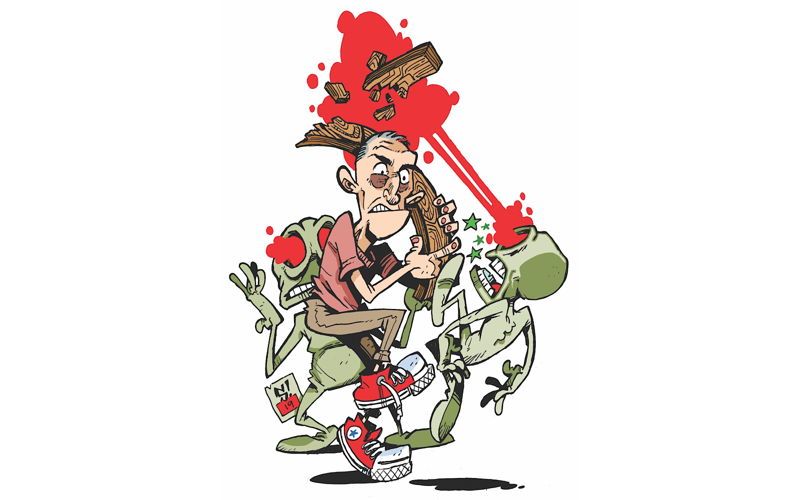 How'd they get the lasers? Great question.

Blotter o’ the week: During an interview with police, a possible assault victim kept referring to “laser people.” He claimed to have defended himself from his attackers with a wooden board.

A $15,000 wedding ring was stolen from an unlocked car in West Ashley. A quick check of CARFAX shows that the ring is over twice as valuable as the 2010 Jeep Compass it was stolen from.

“A great danger would have been posed to society” if some college kids were successful in their attempt to steal a stop sign, according to a police report. Thankfully, they weren’t and society is in perfect working order.

A Halloween decoration was stolen from a man’s yard. It was a brown wicker tree with orange lights, valued at $70. Apparently a neighbor stole it, but didn’t put it in their own yard, begging the question: why?

An African-American priest received a letter titled “The Might of White needs to Rise Up and Defend their own from the Democrat Party and Liberal News Media.” The front of the letter was an image of a Ku Klux Klan member. Crime scene technicians processed the letter.

“Crab/liquid” was leaked into the backseat of a women’s vehicle. What’s “crab/liquid,” you ask? It’s a mixture of white liquid and crab meat, and acts as a great way to say that you don’t know how to cope with your feelings.

The only description a motor vehicle theft victim could provide was that the offender was “wearing pants.” Ok, that’s a good start.

A man advised that he found a loaded firearm with an extended magazine in his front yard. The weapon was not reported stolen and was put into evidence.

A woman was contacted by an unknown man with a foreign accent who advised her that she needed to buy Bitcoin to protect her computer. Not knowing what Bitcoin is, she provided the unknown suspect with her bank information for him to generously purchase the cryptocurrency for her.

A package was stolen from a downtown residence. The victim advised that the package had $25 worth of La Croix hand bags, pins, and a La Croix keychain.

A downtown cyclist almost collided with a CARTA shuttle, after he fell off of his bike. The cyclist fell to the side and slid partially under the bus. The bus was not moving at the time and the cyclist sustained minor injuries.

During a theft from a motor vehicle, a total of 10 credit cards were stolen from one individual. If you weren’t in credit card debt before…