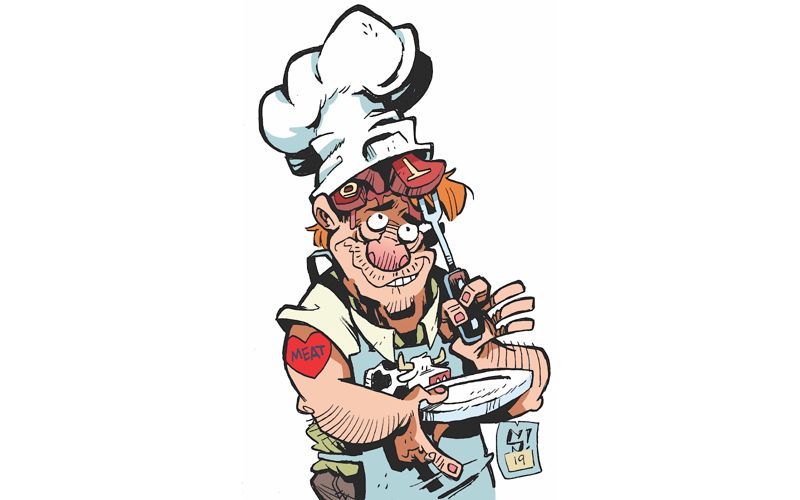 Blotter o’ the week: An employee embezzled eight steaks and a beef tenderloin from a downtown steakhouse. The offender was caught on camera committing the theft. According to police reports, the thief was fired from his last restaurant job for, you guessed it, stealing steaks. Some people never learn.

A woman fell through the ceiling at a downtown grocery store while conducting electrical work in the store’s rafters. She stepped on a bad tile, fell to the ground, and was found bleeding. The woman was transported to MUSC, where she is in stable condition in the Intensive Care Unit.

A loaded pistol and 20 rounds of ammunition were stolen from a car in a downtown parking garage. When asked by the police for information, the victim advised that the car “must have been unlocked.” If patterns of thefts from motor vehicles indicate anything: yes. It probably was unlocked.

Ten Apple Watches were stolen from a computer store. Total loss was $3,999.

A downtown resident found a cannonball in his backyard while digging a pool. CPD bomb techs were called to inspect the piece of living history. X-rays were taken of the ordnance to assure that there were no live fuses or timers attached. There was not enough sufficient evidence to determine if the cannonball could explode or not, so CPD took it “into custody,” according to reports.

Two counterfeit $1 bills were found in a vending machine on James Island. CPD wrote that they had “pink Asian writing on both sides.” Are Doritos really worth the potential prison time?

On James Island, a woman’s car was set on fire in her driveway. By the time officers responded, the flames were “eight feet tall” and too large for a fire extinguisher to deal with, according to police. In the adjacent neighborhood, a different vehicle was stolen. The offender was caught on camera and one resident believes that the crimes are connected, police reports say.

In slightly less terrifying news that subverts trends, a pair of brass knuckles were stolen from an unlocked vehicle. This was part of a series of motor vehicle thefts that occurred in the same part of James Island in one night. Five victims total were listed by the police. Other stolen items include cell phones, ammunition, a $4,000 ring, but surprisingly no guns.

A juvenile was charged with Assault and Battery 3rd Degree for throwing rocks at a woman downtown. The juvenile was a part of a much larger group of juveniles who were following the women and yelling profanities at her on her way to the bus stop. The underage offender denied aiming the rocks at the victim.

“Officers made contact with the manager of the store who stated that her cashier pulled out two cartons of Newport cigarettes (total value $123.69).” We’re pretty sure a couple numbers were added somewhere.

The Blotter is taken from reports filed with Charleston Police Department between Sept. 11 and Sept. 14. No one described in this section has been found guilty, just unlucky. Blotter o’ the week: A modern-day love story: A young woman invites a boy over while her mother is away. The boy steals her PlayStation 4 […]