Blotter: A tale of an acid trip 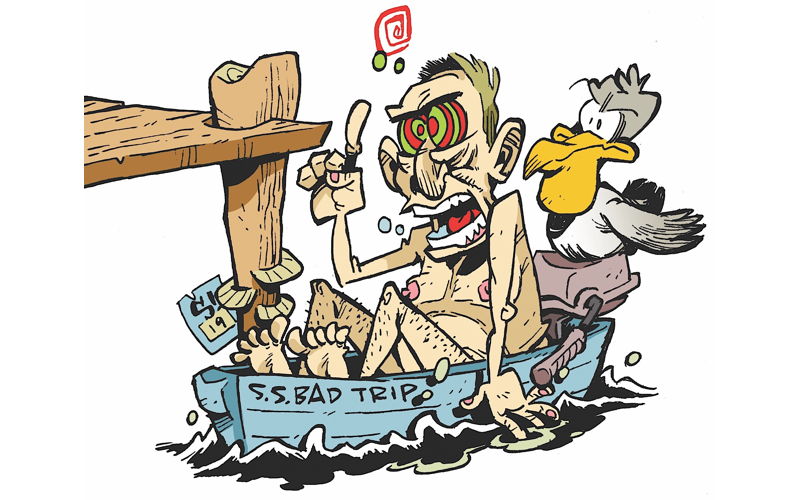 Blotter o’ the week: A woman alerted police to her son, who was believed to be on acid while on board a docked boat. When police responded to the area, they found him twitching, naked, and openly combative. He struggled with police, striking one officer in the face. Eventually, he was detained and shipped off to MUSC.

A man was pulled over for driving in the wrong lane on a downtown street. Over the next 32 minutes, the offender attempted to feed police false information about his identity, providing a fake social security number, name, and birth date. It wasn’t until CPD searched the vehicle that they found his ID among eight opened alcoholic beverage containers. When confronted, the offender said the containers were old and that “he had a problem.”

During a traffic stop, a motorist told CPD that “he had an appendix surgery three weeks ago, that he hadn’t worked in a month, and that he was going through a divorce.” None of that helped him on the field sobriety test, which he failed.

A man illegally entered a West Ashley apartment and burglarized two rooms. One of two residents was also home at the time of the burglary, but he assumed the offender was a friend of his roommate. They shared a casual goodbye, as the offender exited the apartment with $600.

At a downtown gas station, a tow truck driver and the owner of the car being towed got into a verbal dispute. After the man’s Jeep had been connected to the tow truck, the car owner asked the truck driver if he could retrieve something from his car. Upon entering the vehicle, the offender started his car in an attempt to drive away. Before he could put his foot on the gas, the tow truck driver lifted the car. Afterwards, the man complained about back pain and was transported to MUSC.

A woman injured herself while trying to break into her downtown Airbnb. Upon realizing that she locked herself out of the rental, she threw a rock through the window. The individual climbed through the makeshift entrance and cut her hand on the glass. When CPD arrived on the scene, she was found with a bloody towel wrapped around her appendage.

A man’s boat was struck by a vehicle while being towed down a West Ashley road. The offender told CPD that he didn’t remember hitting the watercraft because he had huffed aerosol in an unknown parking lot 45 minutes before hitting the road.

A Broad Street restaurant was tackling another day in this world when a “grossly intoxicated” woman exited the eatery, vomited, and then defecated in front of the joint. The occurrence was captured on the restaurant’s security camera, meaning you’ve probably already seen it on Facebook.

After being denied a cigarette, a man threatened a victim with a boxcutter. “I’m gonna shoot you,” the offender told the victim. No firearm was observed during the interaction, according to police.

The Blotter is taken from reports filed with Charleston Police Department between Oct. 7 and Oct. 12. No one described in this section has been found guilty, just unlucky. Blotter o’ the week: A West Ashley driver reportedly fell asleep in the middle of her first attempt at the balance portion of the field sobriety […]

The Blotter: Locked out of the key party