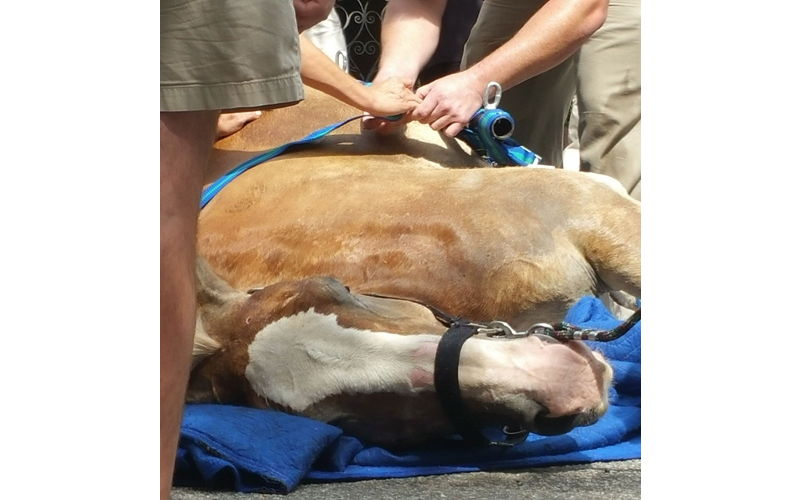 Meet Blondie. He’s a quiet, well-mannered Belgian horse who spent most of his first 12 years working in the fields of Ohio Amish country. Human employees of his current owner, Old South Carriage Company in downtown Charleston, say they see him as a coworker.

Blondie had only been in Charleston about 70 days when he fell down in the intersection of East Bay Street and North Adgers Wharf on his first tour of the day around 9:30 a.m. on Fri. July 17. The driver told police that noise from a nearby cement truck spooked Blondie and caused him to back up into the carriage. When he fell, he remained on the ground for at least two hours before a forklift was brought in to help him back to his feet.

Blondie’s accident has prompted yet another round of a familiar debate in Charleston: What to do about carriage horses? Some protesters gathered in the street last week calling for the tours to be banned, as they have in some other Southern cities. People for the Ethical Treatment of Animals (PETA) released the following statement after the accident:

“Busy city streets are no place for horses, who are easily spooked by loud noises and commotion, so it should come as no surprise that Blondie’s collapse reportedly followed a scare. As temperatures in Charleston soared into the high 80s, temperatures where hoof meets pavement likely rose above 100 degrees. Blondie languished on that pavement for more than an hour before a crane was called in to lift him to his feet. This incident is yet another testament to the cruelty inherent in the horse-drawn carriage industry.”

The Charleston Animal Society, meanwhile, stopped short of calling for an end to the industry altogether, but it did successfully lobby the Mayor’s Office last week to order an independent veterinary review of the accident.

The moral questions of how humans ought to relate to horses hinges on some fundamental assumptions about the nature of the relationship between man and beast. Hal Herzog, a professor of psychology at Western Carolina University with expertise in human-animal interactions, says horses are a prime example of what he calls “the moral confusion that we have about animals generally.” Herzog dealt with this confusion in his book, Some We Love, Some We Hate, Some We Eat: Why It’s So Hard to Think Straight About Animals.

Historically, horses fit into the category of livestock or working animals. In some cultures, they were even treated as meat animals. But today, with animal labor no longer playing a central role in transportation or production in urban areas of the developed world, Herzog says their category is shifting.

Add to that moral confusion the anachronistic appearance of a beast of burden lumbering down a modern city street, and Herzog says it’s no wonder that a diversity of opinions exists on how the horses ought to be treated.

The welfare of horses is not a new cause for animal-rights activists. At its founding in New York City in 1866, the American Society for the Prevention of Cruelty to Animals made the protection of horses one of its first concerns, campaigning against city-sanctioned practices that overburdened carriage horses and even creating the first ambulance for injured horses.

Today, according to Charleston Animal Society CEO Joe Elmore, the city of Charleston could do more to ensure the safety of horses on hot summer streets. “We all know the carriage horse industry is controversial. Everybody in Charleston knows that,” Elmore says. “We’re focused on the accident and what can be learned from that to prevent this from happening again.”

Elmore, who has asked that the Charleston Animal Society be allowed to participate in the accident review, says the initial report from police raised several questions in his mind, both for the carriage company and the city.

“The other thing was, in the police report, there were 10 passengers. Why weren’t any of their statements recorded to corroborate what the carriage horse operator said? I mean that’s just basic … If a Delta Airlines plane were to go down, you know you’d have the NTSB, which is an independent group, really investigating it. You wouldn’t have the airport or the airline providing the information.”

Elmore says he’d also like to see a review of city policies meant to keep carriage horses from overheating in the summer months. An ordinance currently requires tour companies to pull their carriages off the streets when the ambient temperature reaches 98 degrees or the heat index reaches 125, but Elmore says the city should reconsider the location for its official thermometer, which is currently several blocks north of the Market on Calhoun Street and affixed to a three-story building.

Shawn Matticks, a manager at Old South Carriage Company, says he doesn’t have a problem with submitting to an independent investigation, but he doesn’t see the need.

“If that floats their boat, let them do it,” Matticks says. “I don’t think there’s a need to because it’s pretty straightforward. I don’t know what else they’re going to find that is going to be contrary to what happened. They can come look at our records, they can talk to the police officer on the scene. It doesn’t change the narrative.”

Last Tuesday, with the heat index around 115 degrees in the afternoon, Old South made the decision to bring its horses in from the heat, despite the fact that city ordinances would have allowed them to keep working. Matticks says the company lost money because of the decision, but they decided it was best for the horses.

According to Matticks, on the day of Blondie’s accident, he got a call from his driver and ran the half-mile to the scene to help. He says he, his staff, and a veterinarian tried using water, ice, and even intravenous steroids to help coax Blondie back onto his feet, but they determined that the horse had lost blood circulation to two feet from lying on his side. His feet had fallen asleep, essentially.

Matticks says the company’s veterinarian determined that Blondie’s body temperature, breathing, heart rate, and hydration were all fine. Blondie is resting at the company’s pasture on Johns Island now, but he says the horse’s only injury from the accident was some abrasion to his legs from the asphalt.

“When I came up on the scene and saw Blondie laying there, I didn’t see Blondie the horse or ‘Oh my God, my people aren’t going to finish their tour,'” Matticks says. “I saw my coworker laying there on the ground, and I was trying to get him back up.”