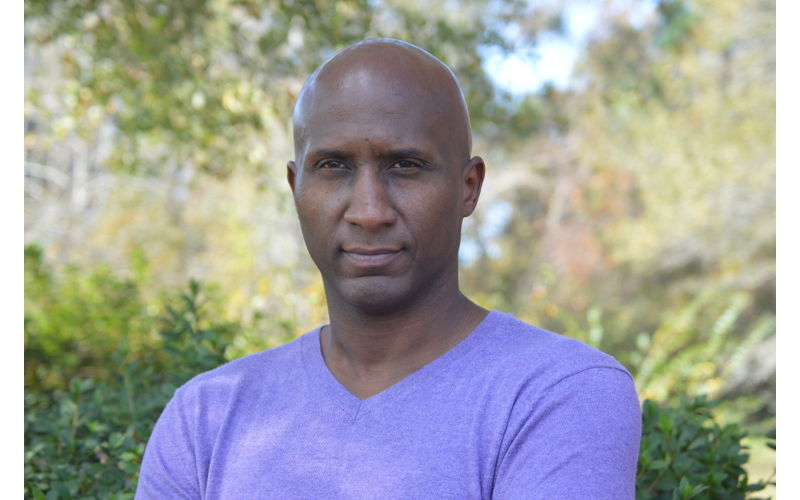 There I said it. To some who read this, this may come as a shock; to others this may be a revelation they had long suspected, but weren’t completely sure. To be clear, I’m classified as legally blind, meaning my vision has been measured at less than 20/200 (20/400) in my better eye (right) with corrective lenses (including telescopes). This means that I see at 20 feet what someone with “normal vision” sees at 400 feet.

Yet if you looked at me, you wouldn’t know it.

And this is by design. All part of the master ruse. My secret of secrets. That is until today.

This is not a pity party. Please don’t feel sorry for me. I’ve never felt sorry for myself and in fact, I believe I am blessed beyond measure. I’m a lucky dude.

I have a condition called Stargardt’s Disease. It’s a macular degenerative condition that causes me to lose my central vision. I will probably never go completely blind (total darkness), but let’s just say, I won’t be taking the kids to school in the new Rolls Royce anytime soon. To some this may sound bleak, but it could be worse. At 14 I was diagnosed with Retinitis Pigmentosa, which at the time, was a sure ticket to the blind dance. I didn’t find out otherwise until, my then girlfriend, now wife insisted that I visit an eye doctor when I was somewhere in the neighborhood of 29 years old.

Up to that point, I had managed to get a driver’s license (I failed the eye test then, but got the go ahead anyway), traveled to Jamaica on a whim and explored the mountainous marijuana farms with a local farmer with a big machete (I could see that), driven from Atlanta to Miami at midnight, driven from Sacramento to Los Angeles, driven over the Bay Bridge, dated lots of women who never knew my vision issues, pledged a fraternity, graduated from college, taken the bus across the country twice, taken the train across the country four times, and lived life to its fullest, all without anyone truly knowing my secret.

Like many people with low vision, I managed to make adjustments that compensated for my lack of visual acuity. I remembered nearly everything that everyone told me. I figured out how to adjust my computer screens to compensate for my vision. I learned how to order at a fast food restaurant by asking the cashier if he/she could read a portion of the menu to me because “I left my glasses at home.” In short, I learned to not let anyone think or know that I had a disability, and it worked.

My closest friends knew, though I don’t think they ever understood the severity of it. When I entered college I had a valid driver’s license that would expire when I turned 20. In my mind, I knew that I was on the clock for four years. There was no way I would get my license renewed because in South Carolina you have to take the vision test every four years (I did try twice, failing miserably both times). My 20th birthday came and left, but I kept driving. I knew that as a college student I would “get a pass” for an expired license, and I did the one time I got stopped for speeding. Of course my court appearance didn’t quite go as planned, but that’s another story. Eventually though, I realized that I simply couldn’t do it anymore.

My vision had always progressively gotten worse. Things that I could see at 20, I couldn’t quite see at 24. Things I saw at 25, I couldn’t see at 30. Driving became just a cherished memory, as did many of the other things that I had tried to cram into this short period of time; like going to concerts and actually seeing the band perform. Until my wife made me see the doctor, I lived like a man who was going to lose his vision completely somewhere between when I was in my 40s (that seemed really old when I was 14).

I’m happily married to a beautiful woman, with three rockstar sons who don’t mind reading menus and movie subtitles to me, and who luckily don’t have Stargardt’s. So, it just seems like now is the best time to finally come clean. The jig is up. I talk about my vision to people, though, I still don’t volunteer information. I do weird things like watch my son’s football games with binoculars even when I’m standing on the sideline. The font on my phone looks like a billboard and if you’re sitting near me, you can read any of the dirty texts my wife might send me. I look at people and most of the time, they’re not sure if I’m looking at them or the tree behind them, because I can’t control my focus. I wear sunglasses a lot and I turn away from people when talking, because I don’t want them to be weirded out by my eyes if they aren’t standing close enough to me. My computer monitor is the size of some people’s televisions. My televisions are like movie screens. I ride shotgun every morning and can’t read a traffic sign until we’ve passed it.

People often ask me what’s my vision like and I tell them that I don’t know. It’s what I’ve always had. I don’t know what I can’t see or what details I’m missing out on. It’s probably better that way. But I guess to sum it up, if I looked at you closely, I could probably only see half of your face… and it’s the good half. Because when you’re blind, everyone looks great.

So the next time you see someone holding a phone, newspaper or magazine (I really miss reading Rolling Stone) close to their face, don’t ask them “If they’re blind,” because they just might say yes.

And when they do, don’t say “I’m sorry” because they’re just fine.

Alison Brynn Ross is a Charleston native who works with line in 2 and 3 dimensions, with illustration and wire taxidermy. See her work at AlisonBrynnRoss.com.