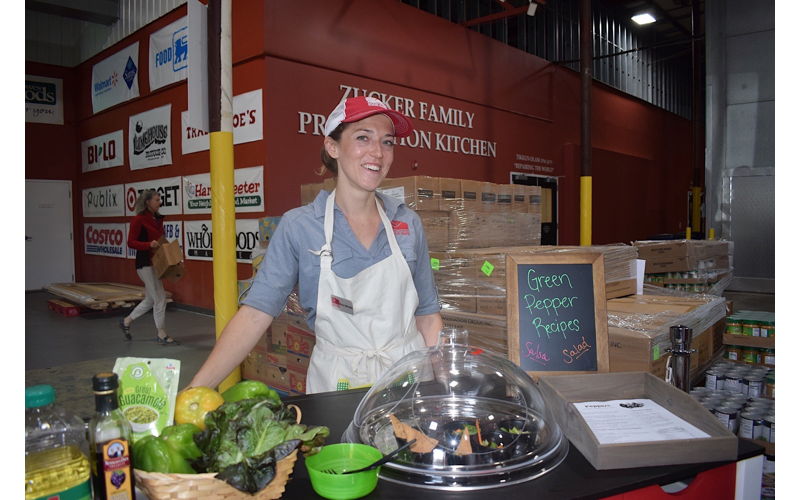 As the sun begins to set and that pale, orange light creeps in through the office window, many are preparing to punch out and settle in for a comfortable evening in their own homes, avoiding the mid-November chill just outside.

Others aren’t as fortunate, and even after a hard day’s work some people have nowhere to go, no easy way to get across town to a crowded shelter that never seems to be the best option.

“It’s still pretty expensive just to get a room in this city,” says Stuart, who preferred to keep his last name anonymous.

Stuart has a job, but has been homeless for about two years now, unable to afford a place to live. He earns enough to cover what many would consider essentials, including a cell phone for communication. Still, he struggles with finding food to eat every day, so he relies on food banks and pantries to make up the difference.

And the Blessing Box Project has helped feed him along the way.

On one trip to a food bank to get a few items, Stuart says that the staff didn’t even bother asking for his personal information. They remembered him.

Taking the basic idea of a food pantry and making it something that everyone can use to its full potential, Katie Dahlheim started the project in January 2017, and it has been growing ever since. Dahlheim repurposed the first Blessing Box out of an old cabinet, and others have followed her example.

Groups like the Boy Scouts and other local nonprofits have taken to refurbishing old furniture into Blessing Boxes, making each one unique to the community that helped to set it up.

What makes the Blessing Box Project different is how simple it is in comparison to other efforts. Now with over 100 boxes strategically placed across the state, anyone can leave food or other goods behind for those in need.

“It was incredible to watch it grow,” Stuart says. “I believe in giving back as much as taking, and that’s what’s so wonderful about it. But also, you have to jump through so many hoops to get help in the city, and it becomes real frustrating when all you want to do is eat.”

Though Dahlheim started the project, she never intended to be the face of it. From the beginning, it was meant to be a community-driven, organically servicing food pantry. No one person commits to filling any given box, but the generosity of the surrounding community keeps it going.

With Thanksgiving and Christmas right around the corner, now more than any other time of year, we are focused on food. As some prepare up for family dinners, others prepare for another cold night outside.

“Fortunately, I’m from here, and I do have friends — not family, but friends — and some years I am invited to join in the celebrations, and some years I’m not,” Stuart says. “One of my holidays it was just me alone, and fortunately someone had given me some canned hams, and I was happy for that … I know there’s lots of groups that will host Thanksgiving dinner, but most of those areas tend to be downtown or areas that just aren’t accessible to me.”

The holidays are also a hard time for those in the homeless community with families and others who struggle financially to support families.

“We are always in need of food donations,” Dahlheim says. “With 100 boxes, there is always the opportunity to do a food drive. And that’s not anything that needs to be sanctioned or approved, especially as we come up to the holidays. Food-based holidays are especially hard for those who can’t afford to feed their families.”

For those families and those who are alone, an empty box could mean an empty stomach for the day, or longer if the box isn’t filled soon.

“Sometimes, the boxes are empty,” Stuart sighs. “Some areas just get hit a lot, or they just don’t get filled often enough. It’s kind of disheartening. To ride five miles through traffic to get to a box and find nothing in it — it just kind of hurts.”

One of the benefits that large food banks have over smaller community projects is that they typically have an abundance of supplies for those in need. In fact, one community member who uses food pantries to supplement their needs often leaves food she receives from the food banks in Blessing Boxes for those left with limited options.

Leslie Mays, 61, has been using local food banks for about three years now. She is raising her two grandchildren at her home in West Ashley, but with their needs combined with her age, it’s hard to come by enough work to pay the bills. Still, she says that her hardships have opened doors.

“I think it’s also a blessing and a healing to know it’s a way of working together as a community in small ways,” Mays says. “The way we live these days is much more isolating. We used to get our needs met in the neighborhood, because we all knew each other …

“The Blessing Boxes are a great place to share with people who are trying to work jobs, but they still have needs, and they can easily swing by and grab things, but they don’t have time to go to the window of the food bank.”

The options offered by most food banks are limited further for people with medical challenges like Stuart, who has had a heart condition since he was a child. Or those who don’t have access to a kitchen or other ways to prepare some food.

“I try not to use [food banks] too much,” Stuart says. “It’s hard to get to the areas, and they want to load me up with items that I just can’t use — milk, eggs, pasta, dried beans. I can’t do anything with dried beans, and I would love to enjoy some pasta, but I can’t.”

So what are people supposed to donate? Dahlheim focuses on nutritious items that won’t go bad when planning for what to add to the pantries: peanut butter, pasta, cereal, and canned goods. What people may not consider is coffee, an arguably non-essential item that many of us depend on and take for granted.

On another hand, despite the concept of a “food pantry,” Dahlheim encourages people to leave more than just food for those in need. Toiletries and kid-friendly items are great things to leave in your local Blessing Box. Bug spray and sunscreen in the summertime and things to help others keep warm in the winter are also great things to donate.

“We try to discourage people from donating clothing,” she explains. “Because, there just isn’t enough space. Other things like dog food, school supplies, feminine products, things like that are all sort of welcome additions.”

“Anything non-perishable that’s pretty light” is useful, Stuart adds. “Cans are heavy. They’re hard to lug around. I definitely grab pop-tops, and soups are great. I try to get as many vegetables as I can — you really don’t get a whole lot of that. A lot of it has to do with my heart issues.”

Donations look different for food banks like the Lowcountry Food Bank. According to Margaret Grant, vice president of strategic initiatives, the organization prefers that people donate cash through their website, as opposed to physical food. She says that the LFB often sources food from large-scale manufacturers, and cash donations go a long way in paying for shipping costs.

If folks want to donate physical food though, Grant says that it’s a good teaching moment for children. “That’s a great way to reach kids, because they can actually see the food being donated.”

Of course, food banks, pantries, and the Blessing Box Project all have one goal in common: helping those who need help. Hunger doesn’t discriminate, and while many are quick to cast a suspicious eye on those in line for food, others are focused on ensuring that everyone has access to what they need.

“Young people can barely afford apartments now without getting three or four roommates,” Mays says. “We need to remove the stigma. So what if you’re standing in line with a bunch of grannies — who cares?”

During his time on the streets, Stuart says he has seen that stigma begin to break down. He says in the beginning, it was easy for him to become discouraged and start to believe that the world itself was cold and cruel, but the work of people like Dahlheim and passersby on the street have begun to change his mind.

“I think what she has done is a wonderful thing,” Stuart says. “There are lots of people in the city who are doing something similar, and that’s what needs to happen, people need to start caring about each other.”

Find a Blessing Box near you with this map