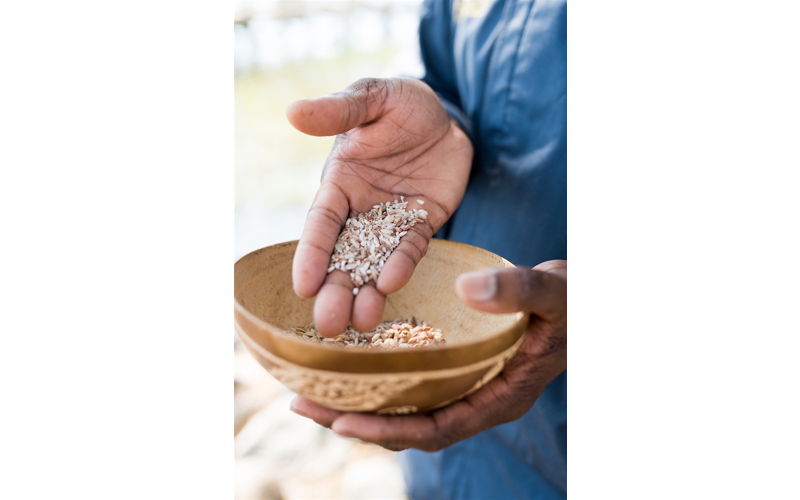 Hill Rice. The grain goes by a number of names. But Hill Rice is the simplest. The story of this red hulled strain of starch is as simple as it is long and winding with a setting that moves around the world. BJ Dennis, local chef and caterer dedicated to Gullah Geechee food and its continuance and revitalization, has learned a great amount about Hill Rice.

Hill Rice is an upland strain of the grain that has its most ancient origins in southeast Asia. In a concise history, it began in Asia, was traded and made its way to West Africa, and then enslaved people began harvesting it on the coast of the southern United States as one of their own staples. Its appeal is that it can be grown on dry land without the need for flooded fields.

“This continues what we’ve already been trying to do out here, bringing back attention to foodways and agriculture and lost ingredients and lost crops,” Dennis says about Hill Rice. “This is a big rice eating culture and this is a big, big, big gap that we’re trying to fill that we found. It can be filled. To plug the whole gap in, it’s there. It’s just getting it back into the community.”

That gap is the disconnect of what rice was eaten by the oldest Lowcountry ancestors of the Gullah Geechee before that foodway was overshadowed by a strain of rice grown for profits of white plantation owners rather than the food of enslaved people’s own growing. Now with the possibility of a descendant of that older rice found in the Hill Rice of the Merikin ethnic group of southern Trinidad, Dennis wants to bring that ancestral food back to the Gullah Geechee.

“It ties together the strands of the great African food diaspora,” says David Shields, chairman of the Carolina Gold Foundation which seeks to preserve and restore heirloom grains. “The food has gone out from West Africa and it connects the population of Charleston with that of the West Indies. It also became the rice of white hill farmers in the South. It’s one of these ingredients that went beyond its ethnic community to become a commodity of sorts.”

“There are families here that I have heard from other people that talked about this upland rice,” Dennis says referring to Hill Rice. “But the rice I always knew was lagoon rice or how Carolina Gold was grown.”

That grain’s legacy dominated the story of rice in the Lowcountry and throughout the South from 1786 until the end of the Civil War. But Carolina Gold was not what fed people of African heritage before it’s introduction as the dominant, capitalist strain of rice. More to the heart of the issue, it was not what those enslaved people and their ancestors grew on their own. Enslaved people had their own type of rice which reinforces that they had their own culture — a culture that went largely unrecorded or was washed out at the time. Hill Rice, or at least a dry grown rice, goes deep into Southern black heritage and it burrows even further into the soil of Gullah Geechee distinction during an era when any distinction beyond being a labor force was a quality to be stomped out. Hill Rice was how those of the African diaspora who were enslaved in the Lowcountry survived and manifested their uniqueness.

“This was the rice enslaved people grew,” Dennis says. “Here you have a rice that’s indigenous to the cultural roots of a society of people. It’s not just African. This rice goes through India. There’s thousands of grain varieties of rice world wide [in] Bali, Indonesia. But we’re just talking about people here and who brought rice culture. Who brought rice culture to the Americas was West Africans.”

Dennis has choice words for his apathy towards a New York Times story about Hill Rice that ran Feb. 13 2018. In Dennis’ opinion, the focus of the Times story missed the mark. The story focused on the connection of Hill Rice in southern Trinidad as grown in Merikin culture to the historical crop grown by black people during the enslavement era along the Southern coast and specifically on the coastline of Georgia and South Carolina. To Dennis, the New York Times has nothing to do with the places Hill Rice affects. He wants to see the story in Charleston and Trinidad’s news outlets.

Also the narrative of reconnection lent itself to being interpreted as a discovery of this rice strain by people in America invested in rice culture. That took away from the Merikins as keepers of this rice and obscured the food’s place in their culture.

Dennis’ interest in Hill Rice is in bringing it back to people in the Gullah Geechee community. The return of Hill Rice would reinforce the quality and character of their community while also providing some health benefits in Dennis’ assessment.

“The goal was how do we get a rice that’s essentially way better for you, healthier for you, with more nutrients and helps fight diabetes, how do we get this back?” Dennis says. Some studies suggest that hill rice has more nutritional value due to its fiber that replaces empty carb calories with nutrients. “There’s a natural rice that people of African descent ate. How do we get that back in the community?”

Returning the rice to Charleston and the Gullah Geechee also provides an opportunity for self sustainment while continuing to delve deeper into a historical identity for an already strong Lowcountry culture.

“I would love to see [and] first and foremost, we have to get back into agriculture,” Dennis says. “We still have a lot of black land. … We’ve gotten away from that not just in the African American community but in general in this country. There’s commercial Big Ag[rigiculture].”

In Trinidad, Hill Rice is farmed by a minority ethnic group known as the Merikin who are descended from formerly enslaved people that came down to the island nation following service to the British during the War of 1812. Charleston City Paper reached out to Francis Morean, a person of Merikin lineage and ethnobotanist who researches Hill Rice and its growers but did not hear back. It was Morean who introduced the grain to Dennis.

As Shields attests, some obstacles sit in the way of Hill rice returning to the Lowcountry. First, it’s quarantined by the USDA for two years so as not to unintentionally create a food security issue. But there’s also the question of whether this rice should be grown in the United States when it’s been kept for more than a hundred years by a group in Trinidad. Shields thinks it should grow and credit needs to be given to the Merikin. Dennis realizes the issues surrounding Hill rice being grown in the Lowcountry.

“I love Trinidad a lot. It’s a beautiful place,” Dennis says. “But I’m not from there. I can be supportive of those groups. But I can’t be there in the community to figure out how to help them spread the rice more. A lot of them sell it and grow it for their personal uses. … I can focus here.”

Dennis hopes that that focus can lead to the Gullah Geechee farming Hill Rice once again.

“The knowledge needs to get back to the people,” he says. “A lot of us don’t even know the roots of these things.”

Charleston purveyors and chefs prepare for a forecasted shrimp shortage