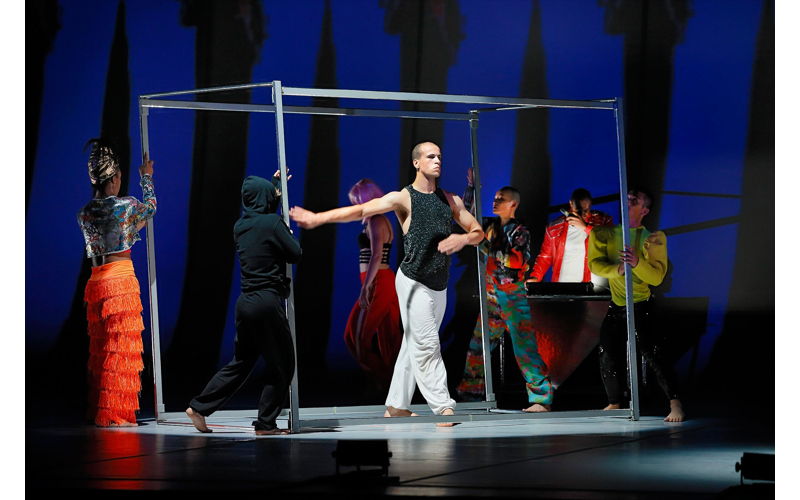 I’ve had the pleasure of seeing the Bill T. Jones/Arnie Zane Company perform before, and as a dance lover, I knew I’d be in for a treat. But the opening night of Jones and company’s three-episode Spoleto run (repeated in its entirety on Sat. June 1) was something more. Much more. It was perhaps one of the more moving displays of the artistic force of movement that I’ve seen.

Here the audience sees Bill T. Jones — the celebrated contemporary choreographer/dancer and cofounder of his venerated company — as biographer, sharing stories from an oral history taken over the course of 15 years with his mother-in-law, Dora Amelan. Dora, now in her upper 90s, was a Jew living in Belgium when the Germans invaded during World War II. She eventually made it to the South of France where she had cousins and worked as a nurse in internment camps. Her tales of helping orphaned children and underground efforts to save as many Jews as possible, are full of suspense and fear, horror and heroism, bits of humor and lots of heartbreak.

The personal history is fiercely powerful on its own, but Jones and his associate artistic director Janet Wong wring every ounce of human emotion out of it through a masterful retelling that blends narration and dance with live music, dynamic set design, and visual lyricism. The company’s nine performers take turns speaking in Dora’s and Jones’ voices — often while also dancing/moving on stage — in tones that are gentle, beautiful, clear, and strong. I could listen to them all day. Nor did they ever once miss a line or stumble on a phrase, proving to be as graceful and compelling audibly as they are physically.

The mostly subtle choreography never overpowered the story, but instead, echoed and amplified through physical strength and grace the inherit power of Dora’s tale. The innovative set design, by Dora’s grandson, Bjorn Amelan, featured gray and red jigsaw-like puzzle pieces that were constantly shape-shifting, sometimes creating rooms and windows, sometimes toppling over on dancers, symbolic of the wartime sense of things falling apart. Live music added even deeper enchantment and emotion, thanks to the supremely talented vocalist Nick Hallett and pianist Emily Manzo.

By embracing every tool in his full artistic repertoire — voice and story, light and shadow, music and tempo, costumes in color and design that were just right, and all of it at every turn underscored by deeply illuminative movement — Bill T. Jones honors the life and legacy of the Doras of the world. People of resistance and resilience, pushing against the tumbling pieces of the set, carrying and upholding one another, telling stories, helping loved ones, calling out horror and evil and love, always love. “You must remember, there were always good people,” Dora says.

The trilogy continues Wednesday and Thursday evenings, with a dance/movement-centric performance anchored in different oral histories, but told, I expect, in similarly extraordinary ways. I hope so, at least. After seeing what Bill T. Jones has done in sharing Dora’s “Analogy,” I’m not going to miss the next two. To offer a little word-play switcheroo from the title of Dave Eggers best selling book, A Heartbreaking Work of Staggering Genius, Analogy/Dora: Tramontane is a genius work of staggering heartbreak.