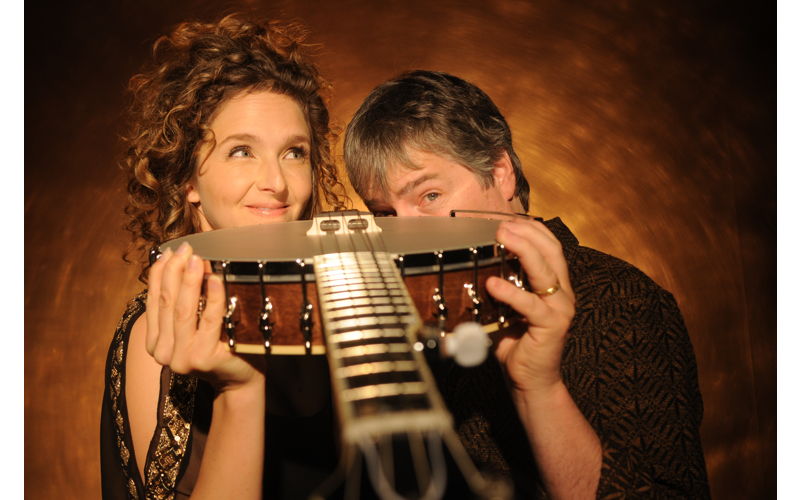 In Labor and In Love

Getting paid to travel with your family is the new best-of-both-worlds American dream. Béla Fleck and Abigail Washburn appear to have it dialed in, with no fancy Instagram influencer photo shoots required. They travel on a bus with a pair of nannies and a road crew, taking plenty of off days to relax in scenic locales (they chatted with City Paper in December from their bus in California, before the kids hit the beach).

But behind every perfect picture is a real human story, and Fleck and Washburn are no different. We rescheduled their interview after Fleck slept through our first scheduled time after a night of cold medicine and a colicky baby (Theo, their second, born June 2018). Washburn arrived late to our second scheduled time after helping their five-year-old, Juno, ahem — use the bathroom — in a restaurant near the bus.

“These are high-stress periods,” Fleck admits. “The hardest parts do pass. They come in waves, and right when you think you understand how to do everything, you have a whole new set of issues as the child grows. But the great thing about doing it a second time is that you know it does get better. We’re both a lot mellower this time around.”

The banjo-playing pair’s focus on their duo project is by design. Fleck collects Grammys like Pez dispensers — he has 16 — and can sell out venues worldwide with his own band, the Flecktones. Washburn built her reputation with all-girl, old-time troupe, Uncle Earl, and with her Sparrow Quartet. But for two parents who want to be together and with their children, all the pieces fall into place with their duo project.

Their 2014 eponymous debut was recorded after Juno’s birth, relying heavily on traditionals and songs already written by Washburn. “We miscalculated a bit with the idea of having a baby and making a record, and we didn’t write much together,” says Fleck. To give their sophomore release, 2017’s Echo in the Valley, its own identity, they committed themselves to co-writing most of the songs, including lyrical contributions from Fleck.

A pair of songs are especially poignant to Fleck: “Let It Go” and “Don’t Let It Bring You Down.” The former stemmed from watching Juno become his own person. “When you start out, you’re on suicide watch for the first couple of years, trying to protect them from stepping off a cliff or out into traffic, and then one day they’re going off to school and running off happily,” says Fleck. “What happened to this little creature that I had?”

The same sentiment of letting go also made its way into “Don’t Let It Bring You Down,” written soon after the 2016 election, when Fleck was surrounded by close friends and family depressed by the outcome.

“Holding onto things can really mess you up. You can’t let it destroy you,” says Fleck, who found himself humming the chorus while out on a jog. The song does take its stinging jabs at the administration — “Decency’s lost while fortune gained/ Rich and weak fools may rule the game,” sings Washburn. Likewise, the duo’s rework of “Come All You Coal Miners” concludes with a fierce provocation that could garner scowls in true bluegrass country: “I am a coal miner’s wife, I’m sure I wish you well/Let’s sink this capitalist system in the darkest pits of hell.”

“It’s a powerful piece of music that could make somebody very thrilled with us or be very upsetting,” says Fleck, referencing the greenwashing PR campaigns of clean coal, and the on-the-ground counterpoint of jobs lost in the coal industry. “When a piece is powerful like that, you have to decide if you want to commit to it.”

Fleck and Washburn honed their arrangements and song list together, rehearsing and recording at their home studio in Nashville while Juno was at school. For Echo In the Valley, they’d bring a song idea together until they found lyrics and melody that clicked for each of them.

“This isn’t Abigail Washburn with a backup musician,” says Fleck. “She’s a great songwriter, but it was important to me to have a voice in the creation of the songs to make this a sensible duo and have the balance of the music be correct.”

The pair experienced “tough starts” when they’d come together after solo writing sessions, but slowly finding the middle ground proved to be a process they could replicate and build upon.

“Rather than being a fraying experience on our relationship, it was a strengthening one,” says Fleck. “We managed to come up with something that we both feel proud of.”

Theo’s birth threw a wrench in the album’s debut, however. Although it was released in 2017, the 2018 supporting tour was cut short by his arrival. Their trip to Charleston is a resumption of a tour that likely would have stopped here last summer.

“It was not the most brilliant move to have a record and come off the road six months later,” says Fleck. “But we feel like this is the record we wanted to make, and there’s a lot of life left in it. We’re picking up where we left off.”

Fleck and Washburn used to joke on stage that they were a “trio,” despite the third member (Juno) sleeping through the show on the bus. Now they’re a quartet. Like many young families, mom and dad get their quality time together after the kids have gone to bed. It’s just that for these parents, that time includes an audience. Occasionally, that means suppressing the emotions of parenthood for a few hours to step out on stage and be funny and pithy, despite a sick baby just offstage.

“You have to be able to process everything and let go of the frustration when something is hard,” says Fleck of clearing his mind before taking the stage. “On the flip side, it’s so much fun to wake up in the morning, too early, on a tour bus and have the kids playing, and little Theo watching his big brother with worshipful eyes. Being around the kids and touring, in a certain amount of style on a tour bus — it’s pretty neat. We do pinch ourselves that we’re getting away with it.”