Before You Go: Boseman buried in SC; Percent-positive continues changes 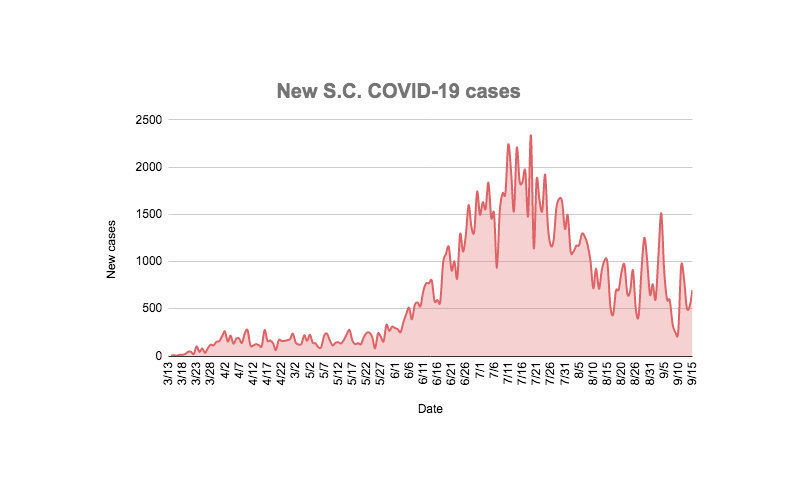 With 4,465 tests collected, the percent-positive rate was 15.7 percent.

Source: Department of Health and Environmental Control, Institute for Health Metrics and Evaluation

Top Stories: The late actor Chadwick Boseman was buried near his hometown of Anderson, South Carolina, on Sept. 3, according to documents obtained by Associated Press. The actor, famous for portraying Black icons Jackie Robinson, James Brown and King T’Challa in Black Panther, died Aug. 28 from complications caused by colon cancer. He was 43 years old.

Soon after his death, a petition to replace Anderson’s confederate soldier monument with a statue of Boseman was formed. The petition has gained steady momentum over the last two weeks, and is currently close to 90,000 signatures. Source: AP

What we’re reading:
ProPublica: ‘America Is About to Lose Its 200,000th Life to Coronavirus. How Many More Have to Die?’
Associated Press: ‘City to pay millions to Breonna Taylor’s mom, reform police’
New York Times: “A ‘Crossroads’ for Humanity: Earth’s Biodiversity Is Still Collapsing”

U.S. Sen. Tim Scott rejected journalist Carl Bernstein’s claims that he was among nearly two dozen Republican senators who have privately expressed disapproval of President Donald Trump to others.

College of Charleston students will present six monologues Dec. 4 and 5 that provide different perspectives on the last tumultuous year.

AFFA will launch its local’s card on Tuesday.

U.S. Sen. Tim Scott rejected journalist Carl Bernstein’s claims that he was among nearly two dozen Republican senators who have privately expressed disapproval of President Donald Trump to others.