Beards of Comedy: fuzzy fun at the Pour House

Laughing at the unconventional style of the four Beardsmen 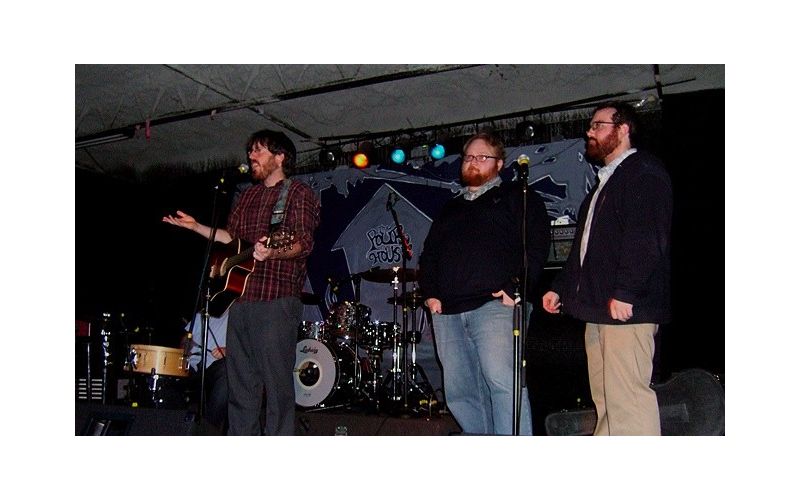 There was nothing political, obnoxious, or shocking from the four fellas of The Beards of Comedy at their Pour House gig last night (Fri. Jan. 22). They didn’t holler and carry on. They didn’t over-cuss or try to gross anyone out. They didn’t put anyone down (except for the guy in the front row who was drinking Pabst Blue Ribbon … but even he got a fist bump from Beardsman on the stage). They didn’t brag within their jokes and observations about how indie-cool they might be.

The stand up and sketch comedy quartet Beards of Comedy — Andy Sandford, Dave Stone, Joe Zimmerman, and T.J. Young — avoided many of the clichéd mannerism and styles of the contemporary stand-up world without coming across as arrogant, smug, or snarky. The 100-strong crowd at the Pour House loved it.

The volunteers from the Charleston Comedy Festival and the staffers at the club did a fantastic job of transforming the main room into a seated theater. It looked like a jam band wedding ceremony (or funeral) was about to commence around 8:15 p.m.

Together as a tag-team troupe for only a year and a half, the Beards performed with poker-faced confidence. Polite and well-spoken, each member leaned into self-deprecating commentary on popular American culture and the doofus lifestyle.

Sandford opened with some mild-mannered confessionals and jokes (he admitted the only exercise he does is sit-ups, and only because he spends so much time sprawled on the floor). He might have offended some dedicated K-Mart shoppers at one point. With rhythmic accompaniment from Young, his dead-pan, bespectacled imitation of Morgan Freeman reciting Wu Tang Clan lyrics (“C.R.E.A.M.”) nearly brought the house down.

Stone made fun his rural Georgia roots and the deeply hilarious Southern-ness of Atlanta culture (as a former resident of Athens, I related). He touched corny college football moments on radio, and hate crimes against agnostics, and the curious lack of Confederate battle flag bumper stickers on Lexus cars in gated communities. His experiences poking around on “the Myspace” led to big laughs. So did his bit on death metal DJs awkwardly reading PSAs on college radio.

The lankiest and nerdiest of the four, Zimmerman’s goofy demeanor relied less on a shlubby point of view. He made pretty strong argument within a funny proposal to replace bomb-sniffing security dogs and bloodhounds with grizzly bears. His stream-of-consciousness folk anthem “Sad Song” (with Young on snare drum) was hilariously pathetic.

Wide-eyed and wry, Young got big laughs poking fun at his chubby appearance and low-key demeanor. His theories on outdoor pet cats, vegetarian-raised chickens for carnivores, and the negative attitude of the Amish on doing the Electric Slide at weddings tickled the crowd.

All four Beards came together for a rhythmically-challenged closing musical number about Scientology, with Stone on snare and cymbal, Zimmerman in guitar and vocals, Young on backing vocals, and Sandford on the carefully-executed hand-claps. If they ever record an album of original songs, this weird one could be the killer lead-off track.

The Beards of Comedy