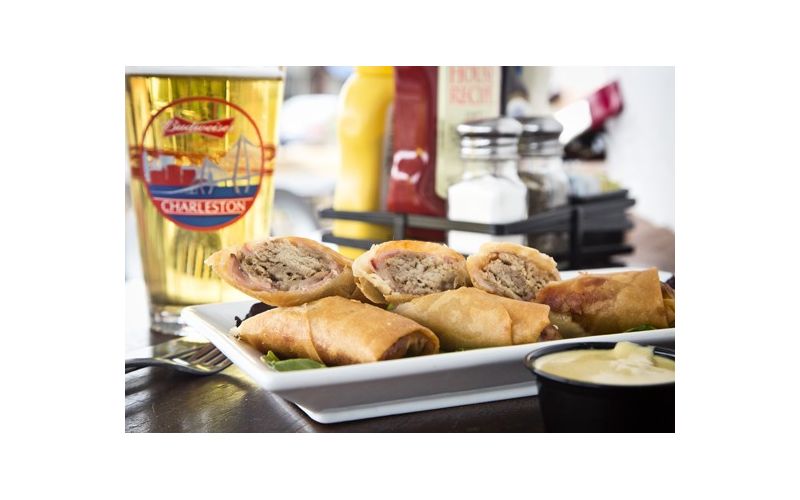 The Right Kind of Retro

When Zach Bedell spoke to City Paper last fall, he made it clear that his newest venture aimed to be unpretentious. On the heels of his short-lived boutique taqueria, Scratch Taco, Bedell planned to keep it simple, to “put in things people like,” he said. And he’s done just that with Black Sheep.

In a culinary landscape dominated by hipster chic, Black Sheep is anything but — a straight-up, all-out throwback. It’s a neighborhood joint where you can grab a beer, eat a burger, play pool, listen to Hootie or Van Halen, watch a game, snack on pimento cheese or fried pickles, catch a comedy show, grab takeout, or listen to live music. No handlebar waxed mustaches here. No deconstructed menus. No charcuterie display cases. Just bare-bones charm. And that’s a good thing.

For those who love lounging on a worn-in leather love seat flanking 13 flat screens while eating hot dogs or burgers, this is the place. Not convinced? Consider this: the hamburgers are house-ground and the bread is delivered daily by Normandy Farm Artisan Bakery. The classic burger ($9.50) comes topped with cheddar and is thick and juicy. But Black Sheep also offers six other variations including a barbecue pulled pork and a surf and turf with buffalo shrimp and blue cheese crumbles.

A modest selection of wine by the glass exists for those who insist on vino with their fried pickles. But wine is not the point here. Nor really are the smattering of “craft” cocktails which I found to be overly tart — my palate leans towards smooth and smoky more so than the puckering piquant of citrus, but that’s just me. The Remedy ($6) combines vodka with muddled cucumber, pomegranate seltzer, and lime. My favorite was The Bad Shepherd ($7) which mixed rye bourbon with Peychauds bitters and Bittermens Hellfire Habanero bitters, plus a sucker-punch of lemon. With a name like Bad Shepherd, I would have preferred more hellfire heat and less lemon (if I’m going to be bad, there’s no point in half-assing it).

And speaking of just me, I have a terrible admission to make. With profuse apology, I hereby admit in print that I’ve never understood the appeal of fried green tomatoes. This probably calls for a revocation of my Southern license, but fried green tomatoes just aren’t my thing, so much so that I force myself to eat them everywhere I go, hoping that one day I will learn to appreciate them. At Black Sheep, the chef does an admirable job of dolling them up. The fried green tomato trio ($6) comes topped with pimiento cheese, bacon and onion jam, and pepperoni and provolone, respectively. This may excite some of you. I have yet to be converted.

Black Sheep’s Cuban egg rolls ($7.50) are intense little meat-packed missiles — shells of pulled pork, ham, and gruyere begged me to pry open my arteries and bazooka-launch them straight in. Dipped in a house-made honey Dijon, they are indulgent odes to meat. And washed down with any one of the 25 beers on tap (many local), these carnivorous capsules are sure to please hungry sports fans rallying for slam dunks in the near future.

No matter what dish I tried, my hunger was promptly satiated. And recent winter days have been warmed with a liquid dessert of hot Jim Beam spiked cider ($5).

Black Sheep is aptly named. Charleston is overflowing with trendy, cutting-edge restaurants, but this Mt. Pleasant spot is almost a middle finger to the cooler-than-cool restaurant scene. The definition of “black sheep” is that of the odd member of a family who follows the beat of his own drum. This restaurant wears that badge proudly. It may not be for everyone (what restaurant is, after all?) but Black Sheep fills a valid niche, and they’ve been rewarded with regulars happy to have found a spot to relax and indulge.