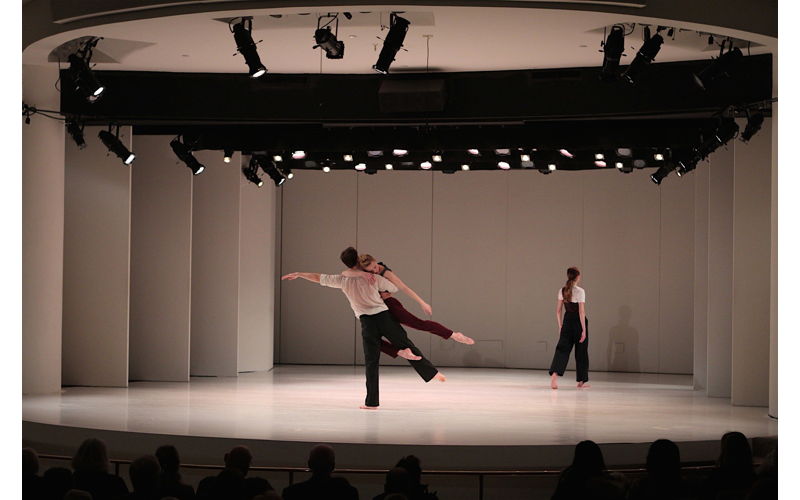 To hear Jodi Melnick talk about the two works she will be showing at Spoleto this year is to wonder whether you should hang up the phone.

Not because the New York-based choreographer’s works (one double bill running approximately one hour) aren’t worthy of analysis or description, but because it’s difficult to verbalize the creative acuity, the dexterity, and the beauty of something as simple as one leg passing under another.

“Try writing a grant or a proposal, and it’s not like I walk by trees and clouds and go, ‘Is there a theme here?'” she jokes, shortly after I realize, out loud, that I have to put into words something that wasn’t even born on a page. “There’s so many images in my head, whether they’re social, political, physical — I don’t go into a studio and think I’m gonna make a piece about this,” she says.

She’s talking about NEW BODIES, the second performance in the bill that came from 10 days of unrestrained experimentation in a studio in the Berkshires of Massachusetts, a mountainous region known for the acclaimed Jacob’s Pillow Dance Festival.

NEW BODIES is broken up into four sections, starting with the three performers in ballet slippers dancing to Hungarian-Austrian avant-garde composer Gyorgy Ligeri.

The work is prefaced with a performance by Melnick herself, One of Sixty-Five Thousand Gestures, which she calls “a labor of love” between herself and the late postmodern choreographer Trisha Brown, who directed Melnick across a string of material that eventually became a nine-and-a-half minute solo.

It was at the Berkshires, back in 2016, that Melnick was able to deconstruct the rigid structurality that Columbia, S.C. native and New York City Ballet principal dancer Sara Mearns has carried for the better part of her life.

Mearns, 32, commissioned the contemporary choreographer and “downtown darling,” as the New Yorker has called her, to do precisely that.

Ballet dancers will typically take up gala work during the summer layoff, both to practice work they’re already performing during the regular season and because the works are so familiar as to require little rehearsal. Mearns, in the meantime, was looking for a way out, if only for a little while.

“I’ve been dancing ballet since I was three, so that’s almost 30 years,” Mearns says. “You get to a point in your career where you’re in a bubble. I was definitely at that place a couple of years ago. I wanted to see what else I could do with myself as an artist, and kind of go to the unknown and see what happens.”

Over the past couple years, NEW BODIES has been perfected as it’s performed.

“I’m there to be provocative and have them look at their bodies in a different way,” Melnick explains. “There’s an expectation of what is spectacular or what [the audience is] going to get in terms of virtuosity with these dancers, and I think there’s so many virtuoustic things to see from them as human beings and artists, [rather] than just as princesses and princes.”

Mearns’ interest in shaking up, and going beyond, the erudite and hallowed institution of classical ballet isn’t new. She had arrived at modern dance as an established disruptor. (New York Times chief dance critic Alastair Macaulay once wondered whether she was “too forceful, too sultry, too broad,” among other descriptors not typically assigned to ballerinas, before ultimately deciding that he loved her.)

At the time of our phone call earlier this year, Mearns was focused on another foray into the world of modern dance, this time honoring contemporary dancer Isadora Duncan with the Paul Taylor American Modern Dance company at Lincoln Center.

“Duncan didn’t like ballet, she hated it,” Mearns clarified.