Backwards and forwards with Chick Corea 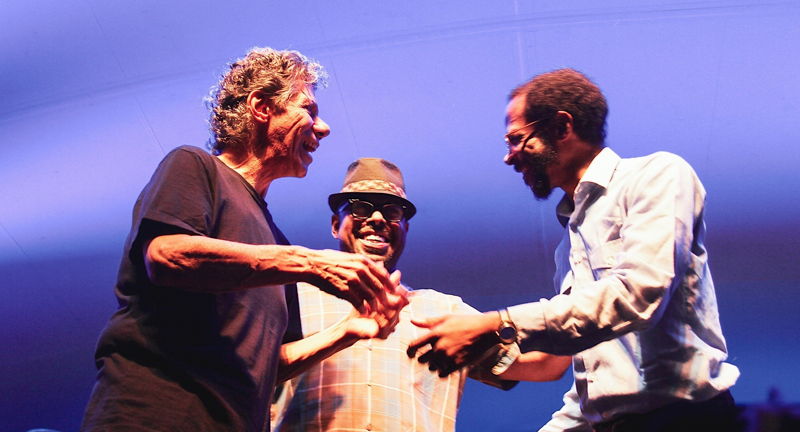 Jazz maestro Chick Corea’s interest in performing was piqued at a young age through some rather powerful gestures made by his trumpet-playing father. “My dad, Armando, sat me down and taught me to read music, and introduced me to the old 78 rpm vinyl discs of Charlie Parker, Dizzy Gillespie, Bud Powell, and many other greats who quickly became my musical heroes,” Corea recalls. “He also bought me my first set of drums when I was 12-years-old. I used to play along at home with Dizzy’s big band recordings and many other hot records of the day.”

Corea’s adolescent formation as a drummer opened him up to the possibility of using the piano, which had been his primary instrument from the beginning, for percussive actions. It’s become one of the hallmarks of his style. Other stylistic components were picked up here and there along the way.

Interestingly, Corea doesn’t credit his brief stints at Columbia University and Juilliard with shaping his approach to music-making. “I had gone to these schools at that time mainly as a way to be in New York City as a teenager,” Corea says. “This was so that I could find Miles [Davis] and Dizzy and [Thelonious] Monk and the others that I grew up emulating and listening to and being inspired by. The schools were teaching subjects that I wasn’t all that interested in. I was more interested in learning directly from the masters.”

Corea made his ambitions known by deftly positioning himself within the NYC scene, ultimately getting absorbed into the late-1960s line-up of Miles Davis’ legendary ensemble, replacing Herbie Hancock on the keys. It was apparently an amicable trade-off, as Hancock and Corea have teamed up numerous times since then. “Herbie’s my spiritual brother,” says Corea. “There is a mutual affinity we have always shared. It’s based on a love for the same music and art.” Still, with Hancock serendipitously stepping aside at such a pivotal moment, Corea’s tenure with Davis would turn out to be more profound than anyone could have anticipated.

While ostensibly hanging around to grow his own skills, Corea managed to take part in some of Davis’ best-known LPs including, Filles de Kilimanjaro, In a Silent Way, and Bitches Brew. Perhaps emboldened by Corea’s youthful energy, Davis’ group began stretching jazz in every possible direction, inhabiting the spaces that would eventually be labeled broadly as jazz-fusion. The significance of that productive period is not lost on Corea. “Every recording session and every set of live music I played with Miles was special. Being with him, and learning from his example was exactly what I wanted to be doing to improve my own musical craft. Miles was all for building up the musicians who played with him. He treated us as equals creatively so as to encourage us to take responsibility for the shape of the music, as he always did.” That sort of artistic empowerment, according to Corea, is precisely what made those particular albums so great, and the whole experience seems to have been what set Corea himself up for greatness moving forward.

Corea’s subsequent virtuosity as a composer is best evidenced by his signature piece, “Spain,” that was first conceptualized while listening to earlier works by Davis, though it would go through several years of shape-shifting before settling into its final form. Corea vividly remembers the story behind that song. “I had heard Miles and Gil Evans’ recording of Concerto De Aranjuez on Sketches of Spain, which is one of my all-time favorite recordings. Joaquín Rodrigo’s Aranjuez theme, and the way Miles played it inspired me to start playing it myself, many different ways. Out of that experiment, the themes and arrangement to ‘Spain’ evolved.”

With his reputation firmly secured heading into the 1970s, Corea would follow his own path in earnest as a solo artist, band leader, and collaborator-at-large, working with everyone from Bobby McFerrin to Béla Fleck in the ensuing years. Even at age 78, the interesting offers continue to come in. “I’ve just signed on to be an artist in residence with the New York Philharmonic for several concerts in 2020/2021 ending with a trombone concerto I’ve been commissioned to write for the NYP’s great principal trombonist Joseph Alessi,” Corea reveals.

At present, though, Corea is most excited about performing in what he refers to as his Trilogy configuration, a traveling show that he will bring to the Charleston Gaillard Center this week. “It’s been a long and beautiful hook-up with Christian [McBride] and Brian [Blade]. We always have a lot of fun playing together, and we are still trying new things out nightly. I’m very much looking forward to the rest of the tour we’re on currently, and to the month of concerts we have scheduled in Europe next March, because we learn so much from each other during these shows.” Looking back at such a storied career, Corea would rather not speculate on his legacy. “I’ll leave that to others to figure out,” he concludes. For now, the music speaks volumes.

COVID-19 updates: South Carolina health officials reported 766 cases of coronavirus on Friday, with 36 additional confirmed deaths. With 6,324 tests collected, the percent-positive rate was 12.1 percent. As of 3 p.m. Sept. 18, via S.C. Department of Health and Environmental Control:Confirmed cases in S.C.:  133,310 (+766 new cases since Thursday)Percent Positive: 12.1% (up from 11.8%)Positive tests in Charleston County (total): […]

COVID-19 updates: South Carolina health officials reported 766 cases of coronavirus on Friday, with 36 additional confirmed deaths. With 6,324 tests collected, the percent-positive rate was 12.1 percent. As of 3 p.m. Sept. 18, via S.C. Department of Health and Environmental Control:Confirmed cases in S.C.:  133,310 (+766 new cases since Thursday)Percent Positive: 12.1% (up from 11.8%)Positive tests in Charleston County (total): […]