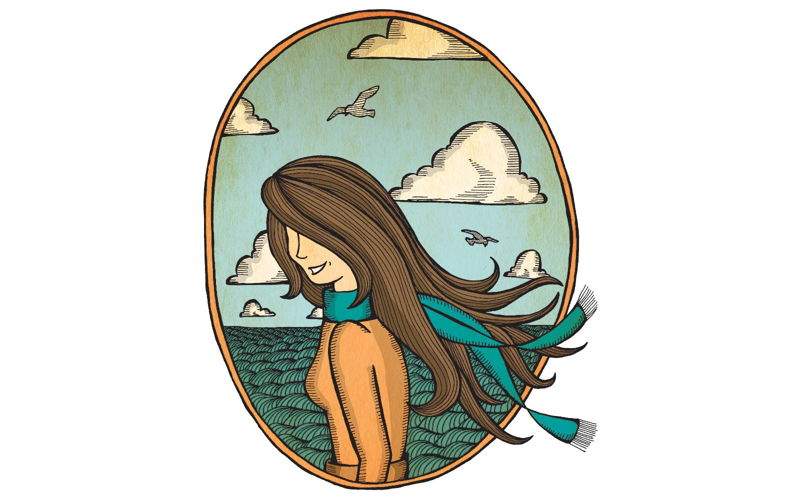 Jon had always been a dock rat. As a kid he’d elbow Fletcher out of the way to be first off their dad’s Boston whaler, taking that huge leap off the gunnel, rope in hand. He loved lassoing the rope against the firm steel cleat, then reaching up to help his mom off the boat. He fancied himself daring, useful, purposeful. At sailing camp, he won the knot-tying contests, hands down. Swift and decisive, he was, at least in those days. Before his college flameout; before his “honorable” discharge from the Navy.

Now at 31, driving a water taxi between Patriots Point and Charleston six or so times a day, Jon was well on his way to becoming the perfect nobody he was, in fact, fairly content to be.

“That’s what you get for naming me after some goddam sappy seagull,” he’d tell his parents.

It’s true. In 1970, barely a year after his folks were married — Barb wearing a lei and a borrowed ivory gown with gaping angel sleeves, and Frank in a bad tux — Jon(athan) came along, and Barb, having spent a bedridden last three weeks of pregnancy practically memorizing Richard Bach’s feel-good fable, insisted on their son’s name. Must have been pregnancy hormones, she consoles herself, and the fact that it was such a short read … He spoke of very simple things — that it is right for a gull to fly, that freedom is the very nature of his being, that whatever stands against that freedom must be set aside, be it ritual or superstition or limitation in any form. Good lord. At least she didn’t name him Livingston, which had been in the running until Frank let that slip to his mother, who called Barb’s mother, who called Barb and put that to bed-rest too.

All that self-actualization whatever stands against freedom crap drove her crazy now. Freedom without a 401K is no freedom at all, is what she tells Jon every chance she gets, though those chances are becoming fewer and far between. Now that Frank had retired from the firm and they’d moved to Daniel Island, they rarely saw their youngest son anymore. When Fletcher and his sweet wife and kids were still in Mt. Pleasant, there were the obligatory Sunday dinners, but finally Jon just quit going. Even his dad’s aged bourbon and a decent steak on someone’s dime didn’t offset the disappointed glares, the barbs.

The harbor’s dull pewter sheen on this chilly December Saturday gave Jon a sense of being on solid ground. He liked the tedium of this gig — the on-the-hour regularity, the simple to-and-fro, the ready-made audience of tourists who tipped well on the days he felt personable and spewed off odd Charleston factoids. They called him “Captain J” and treated him with more respect than they would, say, an Uber driver, though really, what was the difference? But Jon didn’t care. Life on the water suited him. Hell, the marina with its forest of masts and soft continual chorus of metal clinking on metal, water lapping against the sexy curve of hulls, was as good a place as any to call home, and he’d done his share of wandering. He loved the sturdiness of ropes, the steadiness of tides; he respected the fickle wind and even the dumbass cormorants that never tired of hide-and-seek.

Today the breeze was sullen and the sun had yet to burn through the low gunmetal sky. Jon let the Dorothy Marie‘s engine idle as he waited for a barge to pass. Only four passengers this morning, guests from the Charleston Harbor Resort hotel, no doubt going to brunch at some pricey downtown restaurant. “I hear roads will be closed and traffic crazy, what with the Holiday Parade and all,” the lone guy of the group said as Jon ushered them aboard.

It was the wavy-haired brunette with the turquoise scarf who caught his attention.

“Have we met before?” she asked, squinching her blue eyes just a bit, tilting her head in a cute questioning way. “You look like someone I knew in college.” Her friends were huddling up toward the bow.

“Well, I don’t know, but I’d sure like to think I’d remember if we had,” Jon said, taking off his Red’s Ice House billcap, running his hand through his sandy mess of curls. He couldn’t recall the last time a girl hit on him. Not an attractive one at least.

“I was here at CofC in the late ’80s, early ’90s. We’re in town for a friend’s wedding,” she said. “I’m sorry, I’m probably off base — I get this weird feeling when I’m back here, like people and things should be familiar and they are, but then they’re not. I’m Ellen, by the way. Ellen McAffrey, in case that rings any bells. I used to work at Honest Johns, back when people bought albums and didn’t call ’em ‘vinyl.'”

“Hmm, well yeah, I was in town then. At the Citadel for a couple of years. ‘Til I got smart. Or kicked out, or both,” he said. She laughed, but he wasn’t sure if it was to ease his embarrassment, or hers.

“Things sure have changed around here,” she said. “I mean, who would think about staying in Mt. Pleasant 15 years ago? And the college fields right across the way…”

“Some things, sure. Others … not so much. Watch your step there,” he said, kicking a crate of water bottles out of the way.

She offered a kind smile, a little wink (he could swear that’s what it was) and went to sit with her friends. In less than 15 minutes they were pulling up by the Aquarium, and Jon was sure they’d hop off the boat and on into their lives of mimosas and French toast and chatting knowingly in art galleries in the mystifying way he imagined most of his passengers did. But this Ellen chick waited, held back.

“Yes m’am,” he answered. Damn straight he would.

“Good. Cause I’m gonna figure this out between now and then,” she said. “And if I can’t place it, where it is I know you from, then I think maybe I’d like to reacquaint myself anyway. If you don’t mind.”

She took the offer of his hand as she stepped off the Dorothy Marie, and looked back over her shoulder to flash a flirty smile before skipping down the dock to catch up with her friends. Her scarf a gentle wake trailing behind her. A wake that rocked his boat.

The clouds were still heavy and gray on Jon’s passengerless trip back to Patriots Point, but his mood was clear sunshine. He made it in no time, ready to load up the next few travelers and head back across this old channel. Ready to explain, yet again, what Castle Pinckney was. How it dated from the Revolutionary War and later held Civil War POWs, and how that white cross was actually placed there by a Charlestonian who recently died of cancer. A good guy, fellow named Hipp, not even 60 —people loved him. Yes, it’s so sad. Yep, so true, you never know what life holds, he’d nod in agreement as he’d steer the water taxi toward their destination. Just never know.

But he knows that endpoint — that dock, where its metal cleats are bolted in, where he has to turn just so to slide into his slip. And he knows the return one. Knows how to navigate to it with his eyes closed. Always the same. Barely a nautical mile apart. Voyages of limited expanse, limited duration, limited expectation. He knows this, and more. He, in fact, knows that wimpy excuse for an author Bach wrote one thing that did always make sense to him, even if his mom once bought it hook, line and sinker, even if Bach had a goddam frickin’ seagull say it.

Your eyes don’t necessarily see the truth, that righteous, ridiculous bird supposedly said—All they show is limitation. Look with your understanding, find out what (or maybe even who?) you already know, and you’ll see the way to fly.

At 2 p.m. he throttled up the engine to taxi across the harbor back to Charleston. A cormorant ducked under on the starboard side and resurfaced port, shaking water off his awkward neck like he’d surprised even himself. Crazy bird. So predictably unpredictable. And poor thing, can barely fly.

Stephanie Hunt writes for numerous local, regional, and national publications, rides bikes all over tarnation, and thinks if we did more reading, writing, and riding, most everything would be okay. She and her family live in the Old Village and should take the water taxi more.

Tami Boyce is a Charleston-based illustrator and graphic designer. Her work can be found at various establishments including Theatre 99, Early Bird Diner, ReForm Studios, as well as ZaPow! Gallery in Asheville, NC. See more of her work at tamiboyce.com.