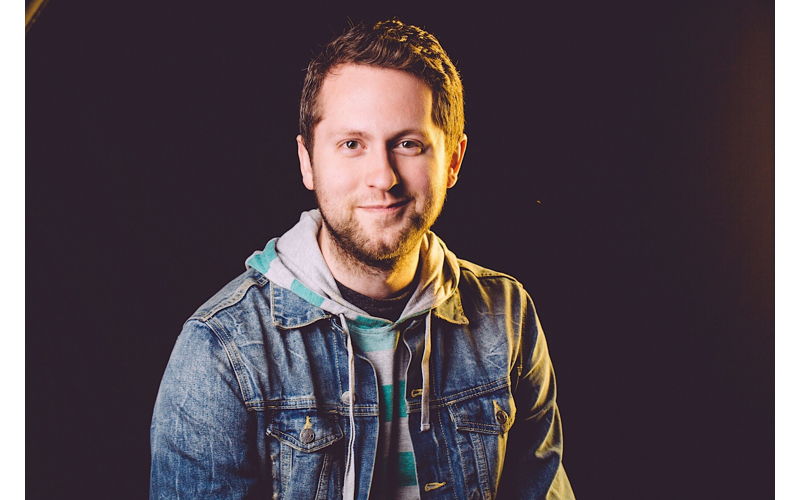 The Rise of Ky Krebs

A little over two years ago, Ky Krebs attended an improv show in his adopted hometown of Austin, Texas, with his now ex-boyfriend. The comedy troupe that was performing was relatively new at the time and was struggling to find its groove. Krebs’ ex-boyfriend was drunk, impatient, and having none of it.

“He stood up and shouted, ‘This sucks, let’s go,’ and walked outside,” Krebs recalls. “I was so embarrassed, but I followed him into the street. When I got outside, he looked me in the eye and said, ‘You’d probably bomb, too.'”

That hateful remark cut deep. Krebs, though not involved in comedy at the time, had latent dreams of becoming a stand-up comic. As a 9 or 10 year-old, he’d told his parents he wanted to be a comedian. He’d grown up watching Eddie Murphy, Richard Pryor, and other masters of the craft and had wanted to follow in their footsteps. Somewhere along the way, though, Krebs lost sight of that dream.

He ended the relationship soon thereafter. A week later, he started doing comedy. “I went from not doing it at all, to doing it five-to-seven nights per week,” he recalls. And here he is now, at the age of 28, headlining the LGBTLOL comedy show on Sept. 13 during Charleston Pride Week at Charleston Music Hall.

His rise has been meteoric, considering stand-up comedy is a notoriously challenging business in which national recognition is often preceded by a decade, or more, of hard work.

For Krebs, though, performing is as natural as breathing.

“It was like letting out a deep breath that I’d been holding in for years,” he says. “Once I started doing it, I remembered all these conversations I’d had with my parents. It made me wonder why I hadn’t been doing it the whole time. To actually go for it made me feel a deep sense of contentment. It was a huge exhale.”

Though Krebs has performed at numerous comedy festivals throughout the country, Charleston Pride will be his first headlining gig. It’s a notable accomplishment for a guy who’s enjoyed many highlights during his two-and-a-half years in the business. His eponymous debut album, which he “threw together on a whim,” as he puts it, rose to No. 2 on the iTunes charts. Throughout the 40-plus minute set, he establishes himself as a gifted storyteller who isn’t reliant on one-liners.

Krebs also conducted a TED Talk at the University of Arkansas-Monticello, in which he mused on a timely and divisive topic: political correctness in the context of stand-up comedy. His perspective is nuanced, thoughtful, and perhaps contrary to the opinion of many contemporary stand-up comics: political correctness, Krebs argued, does have a place in comedy. But that isn’t to say that he believes controversial subjects are off-limits.

“At the end of the day, history is bending toward a more mindful approach to communication,” he says. “The comedians that will rise to the top are the ones who can talk about touchy subject matter in clever and interesting ways, instead of saying certain things for shock value.”

Indeed, Krebs — who, again, lives in Austin, perhaps the PC capital of the south — believes that a politically correct atmosphere can actually sharpen a comedian’s material.

“If people are saying that you can’t say a specific thing because it’s problematic, then maybe [the comedian] needs to rethink the way they’re presenting the joke,” he says. “Honestly, [political correctness] can make you a better writer.”

In his TED Talk, Krebs also mentions a Tweet from Kevin Hart, in which the internationally renowned comedian wrote the following: “Yo if my son comes home & try’s 2 play with my daughters doll house I’m going 2 break it over his head & say n my voice ‘stop that’s gay.'” As a gay man, Krebs was offended.

“I didn’t hear laughter in the room, because it’s not a joke. There’s no set-up, no punchline, nothing to indicate that there’s anything jokey about it,” Krebs points out during the TED Talk.

But having grown up in rural Alexandria, La., Krebs has experienced his fair share of homophobic insults. And although he was the “funny kid first and the gay kid second,” as he puts it, he found that humor could be used as a neutralizing weapon against gay-bashers — as well as a means for perfecting his comedic timing.

“I knew I could outwit them and be funnier than they were,” he says. “I’d flip the embarrassment on them. It was like a writing exercise, or a grassroots version of ‘comedian destroys heckler.'”

Though he’s achieved uncommonly quick success, Krebs has encountered a lot of people who ask the same thing: are all of your jokes gay jokes?

“When places look into booking me, that’s the question I often get. And I’ll respond with ‘Well, did you laugh at my jokes?’ And they’ll say ‘Yeah.’ And I’ll say ‘Are you gay?’ And they’re like ‘No.’ Then I’m like ‘Well, what’s the issue?'” he says. Indeed, Krebs leans into his reputation as an overtly gay comic on his second full-length album, which he unabashedly titled Oops, All Gay Jokes.

“It’s just an hour of gay jokes,” he says. “I wrote it as a response to those comments, and also to prove that queer material isn’t scary.”

The coming months will see Krebs editing Oops, All Gay Jokes, before releasing it to the public. “What we’ll end up doing with it is up in the air,” he says. He’ll also be touring around the Southeast, appearing at numerous festivals (including Charleston Pride). It’s a hectic and sometimes disorienting lifestyle — “It’s embarrassing to tap a stranger on the shoulder and be like ‘Excuse me, but do you know what month it is?'” he says — but his aforementioned sense of deep contentment makes it worthwhile.

The path to his current stanchion in life wasn’t always clear. When he watched Pryor and Murphy on TV as a kid, from an insular rural Louisiana bubble, the plane those comedians existed on was almost impossible to fathom. “It seemed like two separate worlds … this unattainable thing,” he says. But then Krebs’ ex-boyfriend drunkenly shouted at a bombing improv troupe, and the rest is history.