Aurélia Thierrée straddles the line between imagination and madness 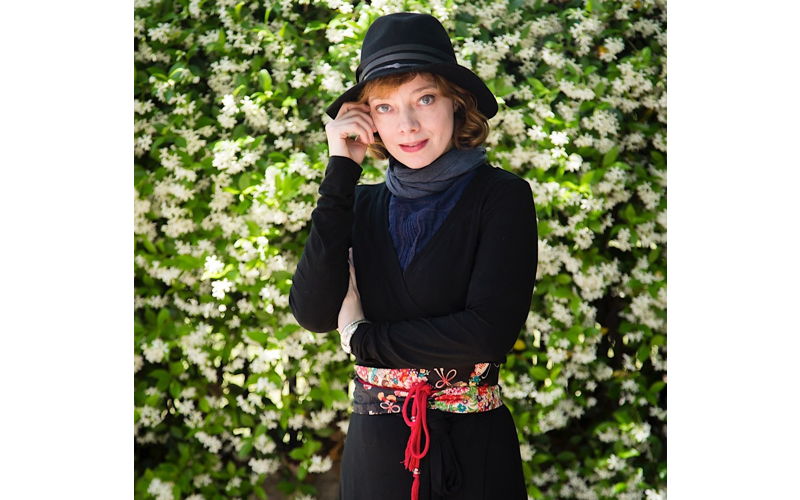 When Walls Can Talk

Aurélia Thierrée is interested in the history of buildings, the past lives of structures. Standing in the Middleton-Pinckney House on George Street, Thierrée seems to have come to the right place. She’s in town to check out Emmett Robinson Theatre, which hosts her Spoleto theatrical production, Murmurs, but before then, she’s posing for City Paper in a building that dates back to 1796.

“The beginning idea was, what if places, walls had a memory? And if we were susceptible to that memory without realizing it?” says Thierrée of Murmurs. An actress by trade, Thierrée is naturally demure, shy almost. We watch as she poses for the photo shoot, unsure of where to place her hands, and then, naturally, placing them perfectly.

The Middleton-Pinckney House became Spoleto Festival USA’s headquarters in 1988; the building was officially donated to Spoleto in 2002, when it was rehabilitated. Today, the three-story structure stands proud on George Street, a sure sign of this city’s future, yes, but also of its past.

The past plays into every space Thierrée enters. “There are places where you certainly feel something,” says Thierrée. “It’s not tangible, in a way, but there are energies.” We watch Thierrée’s face as she looks around the second floor of 14 George St., a room temporarily set up with cameras and reflectors, a stage and chairs. We can’t help but wonder if she feels energies in this old home, or if, perhaps, she’s just thinking about lunch.

We imagine that Thierrée’s mind wanders towards the imaginative more often than not; she grew up in the circus, after all. Her parents wanted to keep an eye on the kids, Aurélia and her brother and half-sister, so they took them along on the show. But Thierrée longed for a home, a place to call her own. So, she rebelled when she was 14 years old, telling her parents she wanted a different life. “I wanted to go to school and live in a house … and I did,” she says triumphantly. “You’re always attracted to the opposite to some extent, which is great.”

Despite settling down in her youth, Thierrée now travels often, and to faraway locales, with Murmurs, which, coincidentally enough, is directed by her mother, Victoria Thierrée Chaplin (the daughter of the late Charlie Chaplin).

Thierrée is hesitant to describe Murmurs. “The ideal audience,” she says, “is an audience who doesn’t know what they’re going to see because it’s based on surprises and tricks.” Still, she has told us about the memories that live in buildings, about tangible elements like puppets, two fellow performers (Magnus Jakobsson and Jamie Martinez), and the show’s six-year long run.

“You don’t know whether it’s the room, influencing with its history, or whether I’ve gone crazy. That’s the idea,” Thierrée says of the show. Watching clips of past Murmurs performances you see what she means; she prances about in a feathered suit, claws at a man, comes face to face with a massive bubble-wrapped puppet. Is her reality strange? Is she insane? Is she dreaming? “The thing we like to explore is the thin line between her imagining this … and madness,” says Thierrée.

Jakobsson’s character grounds the show in some sort of stability — Thierrée calls him the “law and reality.” Martinez, on the other hand has more to do with fantasy and desire. And how the two interact with Thierrée — can she see them, do they even exist? “That’s up to you,” smiles Thierrée.

Murmurs‘ official description, on Thierrée’s website, reads “A woman on the run, her life packed up in cardboard boxes. Moving out … mystery takes over and Aurélia is pursued through abandoned buildings and streets that lead to nowhere.” Thierrée, who currently lives in New York, is originally from France, born to a French father and English mother. She may have rebelled against her circus-travelling as a kid, but she still moves around, even now, touring with Murmurs all over the world.

“Murmurs opened in 2011. I think there have been both outside and inner influences,” says Thierrée. “The skeleton remains the same but everything evolves and hopefully matures. It has changed, I guess.”

This photo shoot is not Thierrée’s first time in Charleston; she visited the city in 2007, with the show Oratorio, which City Paper writer Patrick Sharbaugh described as “dreamlike.” During her latest visit to Charleston, Thierrée sat down with festival director Nigel Redden for a salon, an informal discussion about Murmurs. There, an audience member told Thierrée that she still thinks of 2007’s Oratorio.

“The other day someone mentioned they had seen the show 10 years ago and they remembered scenes from that,” she says. “That’s the beauty. Hopefully it’s a collaboration with someone watching who is going to enjoy it and take away something. The biggest compliment is when the work manages to enter your life and stay on.”

Our favorite 2017 photos that you haven’t seen